18 Hours of Questions, Few Answers: What We Learned About Amy Coney Barrett 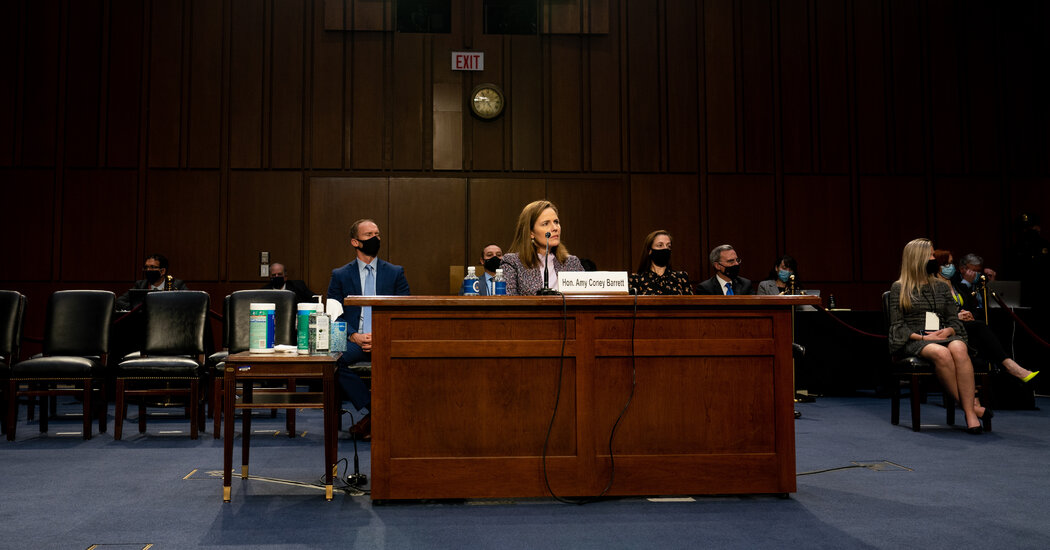 WASHINGTON — Over two long days of questioning at her confirmation hearings this week, Judge Amy Coney Barrett took a particularly rigorous approach to the strategy used by all modern Supreme Court nominees: avoiding saying anything about issues that could turn into court cases and almost nothing about cases that courts have already decided.

She would not say whether separating children from their parents to deter immigration was wrong, whether President Trump can delay the election or pardon himself, or even, in a series of particularly notable responses, whether climate change is real. Nor would she say whether a host of Supreme Court decisions, including ones on abortion and gay rights, were ripe for reconsideration.

“Though past nominees have also avoided answering some of the senators’ questions, Barrett took this to a whole new level,” said Paul M. Collins Jr., a political scientist at the University of Massachusetts, Amherst. “Having studied how forthcoming nominees have been since public confirmation hearings at which nominees testified began in 1939, I think Barrett will rank as among the least responsive nominees in American history.”

With only minor stumbles, Judge Barrett showed the sure command of the law one would expect from someone who has spent the bulk of her career teaching it. Her demeanor, by turns patient and prickly, was that of a professor unlucky enough to find herself teaching a seminar to a particularly dim set of students.

Other recent nominees have made more vivid impressions. Put aside Justice Brett M. Kavanaugh, whose furious response to accusations of sexual misconduct was in a class by itself. Chief Justice John G. Roberts Jr. and Justice Elena Kagan were witty; Justice Neil M. Gorsuch was folksy; and Justice Samuel A. Alito Jr. was grumpy.

Judge Barrett, whose confirmation seems assured, struck a different tone. She was sitting on a lead and meant to run out the clock with the implacable serenity of a professor with tenure.

Justice Ruth Bader Ginsburg, whose seat Judge Barrett hopes to occupy, had also been a law professor for almost two decades before she joined a federal appeals court. But she had a second role outside the academy as a litigator for women’s rights whose Supreme Court victories transformed the law.

Two current members of the court, Justices Kagan and Stephen G. Breyer, were law professors, too. But they had also held government jobs: Justice Breyer as a Justice Department lawyer and chief counsel to the Senate Judiciary Committee, and Justice Kagan as a White House aide and United States solicitor general.

Judge Barrett, by contrast, was a largely undiluted product of the legal academy until she joined the federal appeals court in Chicago three years ago. As such, she may lack an element of political savvy, and the lines she drew may have reflected excessive caution.

Consider an exchange with Senator Dianne Feinstein, Democrat of California. “Does the Constitution give the president of the United States the authority to unilaterally delay a general election under any circumstances?” the senator asked.

Judge Barrett might have recited the provisions of the Constitution that assign roles in the conduct of elections to Congress and state legislatures but not to the president. Instead, she gave a version of her stock answer.

“Senator, if that question ever came before me, I would need to hear arguments from the litigants and read briefs and consult with my law clerks and talk to my colleagues and go through the opinion-writing process,” she said. “If I give off-the-cuff answers, then I would be basically a legal pundit, and I don’t think we want judges to be legal pundits. I think we want judges to approach cases thoughtfully and with an open mind.”

On the few occasions when she permitted herself to talk about matters far from the jurisdiction of the Supreme Court, including a memory of weeping with her Black daughter after the death of George Floyd, the public saw glimpses of a life outside the law.

Judge Barrett was guarded about saying which Supreme Court decisions she would endorse unequivocally. Like other nominees, she said Brown v. Board of Education, the towering 1954 ruling against segregated public schools, was correct. So was Loving v. Virginia, the 1967 decision that struck down bans on interracial marriage. “Loving follows directly from Brown,” she said.

The Loving decision cited Brown once, in passing, and it seemed to make a more general point about the right to marry. “The freedom to marry has long been recognized as one of the vital personal rights essential to the orderly pursuit of happiness by free men,” Chief Justice Earl Warren wrote for the court.

Judge Barrett would not offer an opinion on another marriage case, the 2015 decision in Obergefell v. Hodges, which eliminated bans on same-sex unions. Writing for the majority, Justice Anthony M. Kennedy cited the Loving decision nine times.

Nor would Judge Barrett say where she stood on Griswold v. Connecticut, a 1965 decision that struck down a law that made the use of contraceptives a crime and served as a basis for later cases protecting abortion and gay rights.

There was a time when Republican nominees, including Chief Justice Roberts and Justice Alito, were more or less willing to say that the Griswold decision was correct. More recent Republican nominees have been more cautious, and Judge Barrett chose to follow their examples. She did say, though, that it was “shockingly unlikely” that Congress or state legislatures would try to make using contraceptives a crime.

Judge Barrett was slightly more forthcoming in other areas, indicating that there were reasons to think a Republican challenge to the Affordable Care Act might fail.

She also said she “would certainly keep an open mind on allowing cameras in the Supreme Court.” Nominees often say that, only to change their minds when they are confirmed.

When Judge Barrett stumbled, it was in response to friendly fire. Senator Ben Sasse, Republican of Nebraska, asked her, for mysterious reasons, to name “the five freedoms of the First Amendment.”

She got four: speech, religion, press and assembly. “What am I missing?” she asked. (It was “to petition the government for a redress of grievances.”)

Senator John Kennedy, Republican of Louisiana, thought it was a good idea, around 7:40 p.m. on Tuesday, almost 11 hours into the hearing, to ask: “You are familiar with San Antonio School District v. Rodriguez?”

The decision, in which the Supreme Court declined to deem the poor a constitutionally protected class in the context of school funding, is not particularly obscure. But most lawyers could not summon the details of the case after a long day, and Judge Barrett was one of them.

“My mind’s getting mushy this many hours into the hearing,” she said, “so you might need to refresh my memory.”

“Do you support science?” he asked, and Judge Barrett said she did.

“Do you support children and prosperity?” he asked. Judge Barrett again said she did.

Judge Barrett, surely wondering what she had done to deserve this, gave the only possible answer.