21 People Are Injured in Navy Ship Fire in San Diego 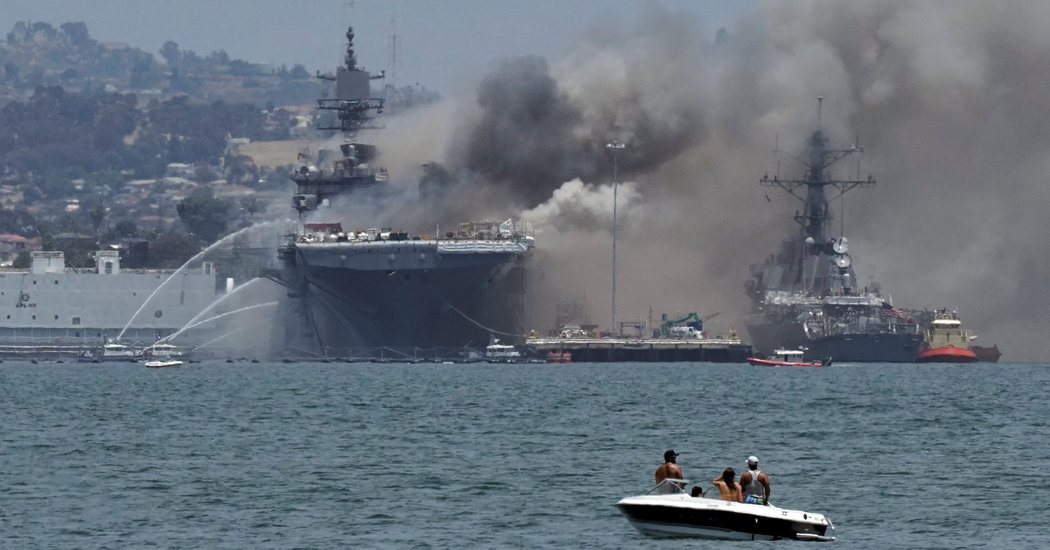 A fire broke out on the U.S.S. Bonhomme Richard at the U.S. Naval base in San Diego on Sunday, the Navy said.

Seventeen sailors and four civilians were being treated at a hospital for injuries that were described as not life-threatening, the Navy said.

About 160 sailors were aboard the ship when the fire was first reported about 8:30 a.m. local time, the Navy said.

The Bonhomme Richard is an amphibious assault ship capable of carrying helicopters and fixed-wing aircraft. It was docked at the base in San Diego for scheduled maintenance between deployments, said Krishna Jackson, a Navy spokeswoman.

The ship has light arms but would not normally have large explosive munitions, such as airdropped bombs, on board while docked, she said. The sailors assigned to it were staying in Navy or private housing on shore and were not on board when the fire started, Ms. Jackson said.

A “duty section” of sailors trained to fight fires was on board when the fire started, she said, and they were the first to respond.

It was not immediately clear how the fire started. The San Diego Fire Department was working with the Navy to fight the fire, a spokeswoman for the department said.

Eric A. Dukat, a retired U.S. Navy commander who is now an associate professor in the College of Maritime Operational Warfare at the U.S. Naval War College, said sailors are thoroughly equipped to handle fires on ships.

“Everyone gets trained to be a firefighter, flooding stopper — all the damage control — and that’s because when you’re out at sea, there’s nobody coming to you,” he said.

Professor Dukat, who worked as a damage control assistant aboard the U.S.S. Wasp, said fires on ships “are not like a house fire” and present a unique hazard because of the rising heat inside the vessel and the intense steam that’s produced when water is used.

“Imagine a fire inside of a ship, just imagine the inside of your oven,” he said.

In 1967, a fire on the aircraft carrier U.S.S. Forrestal killed more than 130 sailors after a rocket accidentally fired on the flight deck and ignited several explosions. The episode has been used as a lesson on how to tackle safety procedures aboard Navy vessels, Professor Dukat said.

The Bonhomme Richard is outfitted to carry landing craft to transport equipment and troops as well as landing boats. It is 847 feet long and has a crew of 102 officers and just over 1,000 sailors.

The ship was commissioned on Aug. 15, 1998, and is the third Navy warship to bear the name Bonhomme Richard.

The first was a 900-ton merchant vessel fitted with 40 guns and placed under the command of Capt. John Paul Jones during the Revolutionary War. Jones named the ship after the French translation of the pen name Benjamin Franklin used as the author of “Poor Richard’s Almanac.”

The original Bonhomme Richard was the first Navy vessel to defeat an enemy ship in combat, the H.M.S. Serapis, in 1779. The present-day U.S.S. Bonhomme Richard has participated in numerous operations, including Operation Enduring Freedom, Operation Anaconda and Operation Iraqi Freedom.