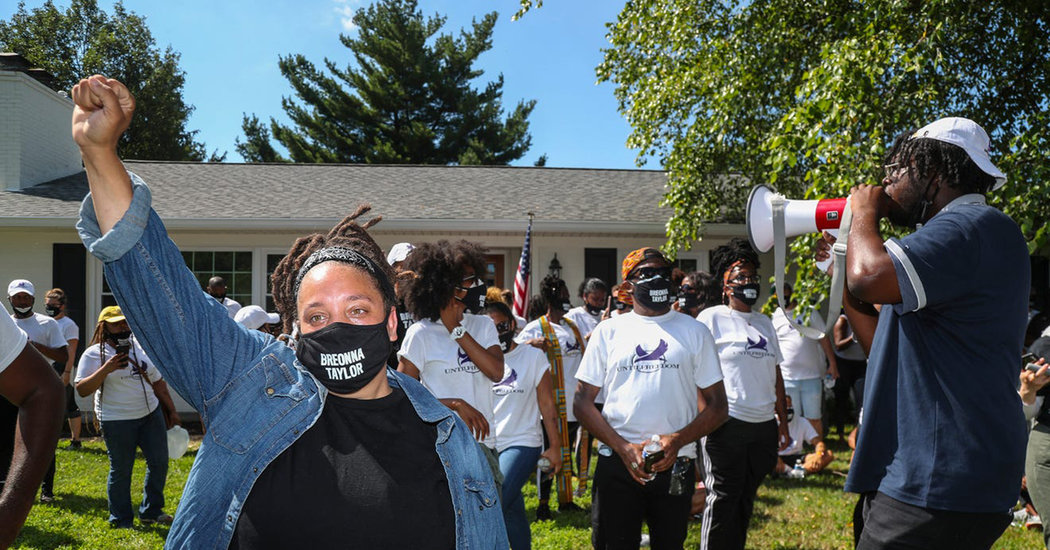 Dozens of protesters were charged with a felony on Tuesday after they gathered on property owned by Kentucky’s attorney general to demand charges against the police officers responsible for the shooting death of Breonna Taylor.

The protesters had gathered in the front yard of a home owned by Daniel Cameron, the state’s attorney general, in Louisville, Ky., the Louisville Metro Police Department said in a statement.

The demonstrators were asked to leave the property at Mr. Cameron’s request, the police said. “All were given the opportunity to leave, were told that remaining on the property would be unlawful, and chose not to leave,” the department said.

The police said 87 demonstrators were arrested and charged with intimidating a participant in a legal process — a felony — along with disorderly conduct and criminal trespass.

More than 100 people attended the protest, which started at Ballard High School in eastern Louisville and ended in Mr. Cameron’s neighborhood. “No one engaged in any threats of violence nor engaged in any violent activity toward Mr. Cameron or anybody else,” said Linda Sarsour, a founder of Until Freedom, which organized the demonstration.

Ms. Sarsour, who was among those arrested, said the felony charge was not justified. “That is an intimidation tactic from the Louisville Metro Police Department to tell us, ‘We’re going to meet you with trumped-up charges, so don’t ever come back here again.’”

Elizabeth Kuhn, a spokeswoman for Mr. Cameron, said that, “ultimately, any charges will be subject to the legal process and further review by prosecutors.”

“We respect the decisions made by the arresting agency and appreciate their assistance in upholding the law,” she said.

In a statement reported by WLKY-TV, Mr. Cameron said his office would “continue with a thorough and fair investigation” into Ms. Taylor’s death.

“Justice is not achieved by trespassing on private property, and it’s not achieved through escalation,” he said, according to WLKY. “It’s achieved by examining the facts in an impartial and unbiased manner. That is exactly what we are doing and will continue to do in this investigation.”

Mark Osler, a former federal prosecutor and a law professor at the University of St. Thomas in St. Paul, Minn., said the felony charge against the Louisville protesters was “unusual.”

Felony intimidation charges might typically be filed against someone who tried to intimidate witnesses or jurors in a court case, he said — not against protesters who had gathered on the property of a public official.

“That would usually be a trespass, not an intimidation charge,” Professor Osler said. “Certainly not a felony.”

Ms. Taylor, 26, an emergency medical technician, was shot and killed by the police on March 13 after three officers used a no-knock warrant to enter her apartment with a battering ram during a late-night drug investigation.

The officers shot Ms. Taylor at least eight times. The police have said that they returned fire after Ms. Taylor’s boyfriend, Kenneth Walker, shot an officer in the leg. Ms. Taylor’s family has said that she received no medical aid for up to six minutes as she lay dying in her apartment.

The Louisville police have fired one of the officers involved in the shooting, Brett Hankison, saying he violated their policy on the use of deadly force by “wantonly and blindly” firing 10 shots in Ms. Taylor’s apartment. The Louisville City Council has also voted to ban no-knock warrants, a measure known as “Breonna’s Law.”

The officers have not been charged, fueling protests in cities across the country, including the one in Louisville on Tuesday.

Ms. Sarsour said the organizers had warned protesters that they could be arrested. She said that some were held in jail for more than 15 hours, and that about a dozen were still in police custody as of midday Wednesday.

“We were searched, we had to give up our belongings, we were X-rayed, we were fingerprinted — palms, fingers, everything,” Ms. Sarsour said. She added that “there was no real social distancing” as people were being detained.

Porsha Williams, a member of the cast of “The Real Housewives of Atlanta,” was among those arrested, a representative confirmed. The Louisville Courier Journal reported that Kenny Stills, a wide receiver for the Houston Texans, was also arrested. A representative for Mr. Stills did not immediately respond to a request for comment.

Amid nationwide protests against racism and police brutality — spurred by the death of George Floyd, who was pinned to the ground by an officer who pressed a knee into his neck for more than eight minutes on May 25 — activists have made efforts to resurface Ms. Taylor’s story, often using the hashtag #SayHerName.

“The police officers who killed George Floyd were fired, arrested and charged in a matter of a week,” Ms. Sarsour said. “Attorney General Cameron has had over 123 days, and there are no excuses. So we wanted him to know that we are targeting him directly because we know he has power over that.”