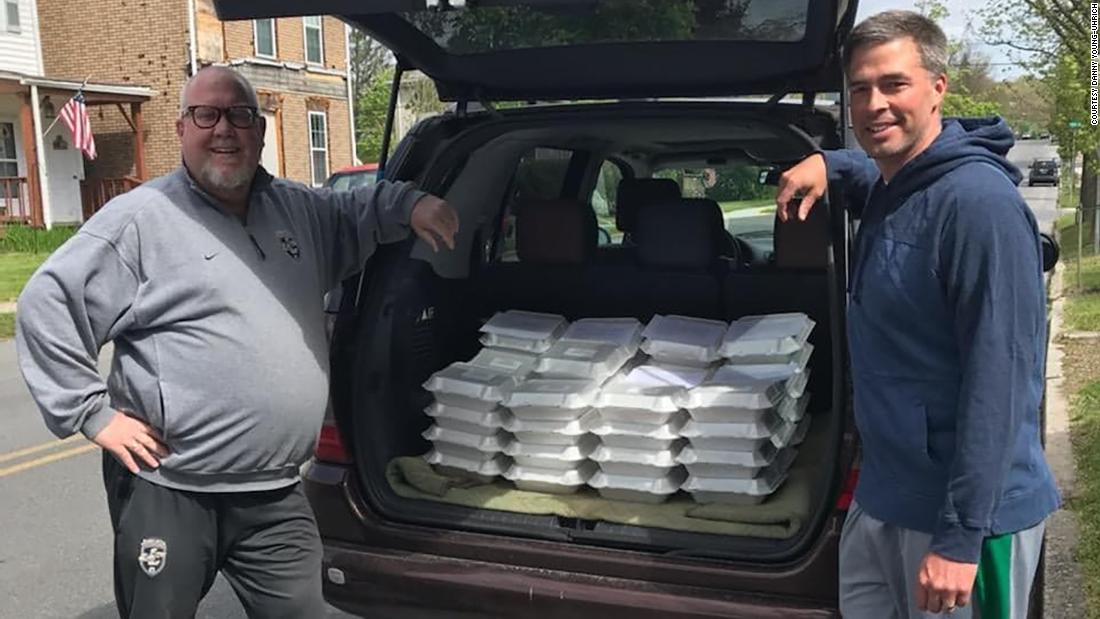 The effort, now known as “Cookies for Caregivers,” began in April when Scott McKenzie was furloughed from his job as an athletic director in Huntingdon because of the coronavirus pandemic.

“I had to decide if I was going to sit at the kitchen table and eat Twinkies for the rest of the year or get up, dust myself off and do something,” McKenzie told CNN. “I made a commitment to myself that I was going to learn something new every week, and the first thing I did was bake some homemade chocolate chip cookies.”

To his surprise, the cookies were delicious. Proud of his newest talent, McKenzie shared photos of his dessert on Facebook. That caught the attention of his long-time friend Jeremy Uhrich, who had also taken to baking cookies with his two sons during the pandemic.

And so the bake-off began. The pair, ready to bake dozens upon dozens of cookies, decided to donate the treats to frontline workers, including nurses, firefighters and local grocery store employees.

Rachael Kyle, one of Uhrich’s former student athletes during his time as a girls’ basketball coach, decided to join the competition, judged by Huntingdon Borough Mayor David Wessels. Armed with her grandmother’s chocolate chip cookie recipe, Kyle ended up winning — but her efforts didn’t stop there.
Kyle, along with McKenzie and Uhrich, delivered their cookies to essential workers before launching the Cookies for Caregivers Facebook group and inviting others in the community to get involved. Within a week, the team welcomed 50 volunteers.

The way their movement works is simple: four volunteers are chosen every week to bake cookies, ranging from chocolate chip and sugar to butterscotch and snickerdoodle. Uhrich, who is a middle school English teacher, and his sons then pack the cookies into containers before he and McKenzie deliver them to essential workers.

“That’s the most meaningful day of our week, delivering to people, talking to them, thanking them, seeing their reactions that go from tears to smiles to shock and surprise, like, ‘Why? ‘Why are you thinking of us’?” Uhrich said. “It’s our way to recognize people and let them know we’re thinking of them and recognizing that their work is valuable and that they are a part of our community.”

The duo, who call themselves “Cookie Dads” and have been friends for over 15 years, have delivered cookies to Penn Highlands Huntingdon Hospital every week since the beginning of their drive.

“I want to sincerely thank Scott and Jeremy for what they started here in Huntingdon,” said Joe Myers, president of Penn Highlands Huntingdon Hospital. “Our staff is working so hard, sacrificing so much, and they take comfort in knowing the community is thinking of them.”

Now the pair — and their baker volunteers — hope to inspire people across the country to start their own group of cookie lovers to bake treats for their own essential workers.

“According to Andy Warhol, we all get 15 minutes of fame,” McKenzie said. “We just hope we can use ours to better the days of people who go to work every day to provide for others. If this can make them feel seen, then we have had success.”