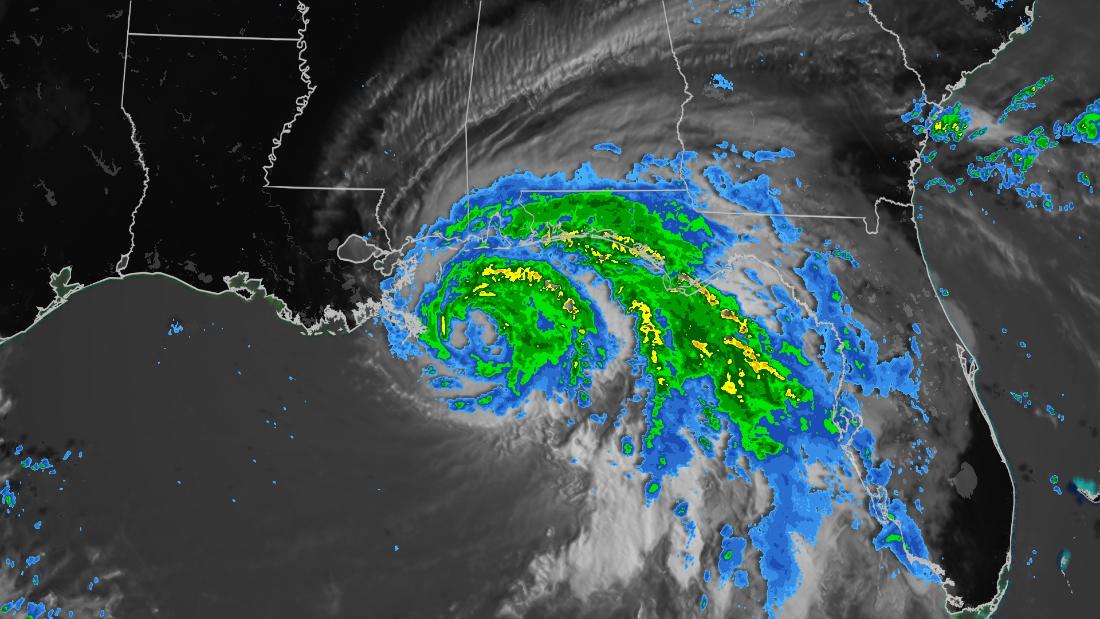 The center of Sally — a Category 1 storm with maximum sustained winds of 85 mph — was moving over the Gulf of Mexico and toward coastal Mississippi only at 2 mph early Tuesday.

It may not move over land until early Wednesday, perhaps near the Mississippi-Alabama state line, forecasters said.

Some of the storm’s main threats, forecasters say:

• Life-threatening storm surge, including 6 to 9 feet from coastal Mississippi to near Mobile, Alabama, and up to 7 feet along the rest of coastal Alabama.

• Heavy rain and dangerous flash flooding. About 10 to 30 inches of rain are possible by storm’s end in southeastern Mississippi, southern Alabama and the western Florida Panhandle.

Flash flooding is possible even well inland, Graham said. About 6 to 10 inches of rain could fall in parts of inland Alabama, Georgia and South Carolina though Saturday.

• Strong winds. Hurricane conditions could be felt on Tuesday afternoon or night in the hurricane warning area: from the Louisiana-Mississippi state line through just east of Pensacola, Florida.

• Tornadoes. They are possible through Wednesday, especially in parts of Alabama and the Florida Panhandle, forecasters say.

As the storm approached Monday, Mississippian Mike Taylor prepared by filling and placing sandbags around his house in Long Beach, near Gulfport, to keep water out.

“Just got to prepare. That’s all we can do,” Taylor said.

Taylor lost his home 15 years ago during Hurricane Katrina. It sat just a few blocks from the beach front, he said. Taylor evacuated as the storm surge moved closer, and when he returned only a slab was left. One of the few belongings he found in the debris was a toy truck that he still keeps in his house.

Taylor isn’t nervous about Hurricane Sally because he believes he has already experienced a worse storm, he said.

His 8-year-old nephew is not as confident. As he helped Taylor fill sandbags, he told CNN he’s worried.

“I’m very nervous. The storm is coming at night and the wind can blow your house down,” the boy said.

A lifelong Gulf Coast resident, 35-year-old Robert Higdon also filled sandbags in the Gulfport area ahead of the storm’s arrival. He said he is not terribly concerned about this hurricane but knows it’s best to “prepare for the unexpected.”

Gulf of Mexico storms can quickly intensify, he said, so he always assumes the hurricane is going to be a little worse than the official forecast predictions.

“I’d rather be prepared for the unexpected,” Higdon said. “If it’s a Category 2 or below we just bunker down. A lot of people are willing to ride it out.”

Residents and visitors get ready in Alabama

In Bayou La Batre, a coastal Alabama town just southwest of Mobile, Ian Fields on Monday secured his boat on the bayou where he and his family plan to ride out the storm.

“We’ve got plenty of tie lines out. That’s about as prepared as we are,” he told CNN affiliate WALA.

Fields has ridden out past storms, though he has a backup plan just in case his family needs to leave this time, he said.

“I’m just waiting for it to come and go,” he told the station.

Jerry Gunderson cut short his vacation on Alabama’s Dauphin Island because of Sally, he told WALA. Still many hours from landfall, the storm was also complicating his evacuation.

“We had booked a home to go to in Mobile, and they just called and said that a tree fell through the house, so right now we’re trying to find other accommodations,” he said.

Evacuations ordered along the coast

Residents in Louisiana’s Plaquemines Parish, St. Charles Parish and parts of Jefferson Parish have been told to evacuate as flooding and storm surge are expected in those areas.

Those in low-lying areas of Mississippi have been advised to evacuate ahead of the storm, with mandatory evacuations ordered in Hancock County, about 60 miles east of New Orleans, for anyone living along the coast or near bayous, creeks, rivers, inlets or in mobile and modular homes.
Several shelters have been opened in the area to house evacuees. Some shelters were at reduced capacity to allow for distancing because of coronavirus, including in Alabama’s Mobile County, CNN affiliate WPMI reported.

Flights canceled ahead of the storm

Airports in at least two states have announced flight cancellations due to the storm.

Pensacola International Airport in Florida is closed and Alabama’s Mobile Regional Airport has canceled all flights ahead of Hurricane Sally.

American Airlines reported that it is “closely monitoring” the hurricane’s track and has waived change fees for passengers who opt not to fly because of the storm.

United and Delta also said they will allow passengers to reschedule their flights due to the hurricane.