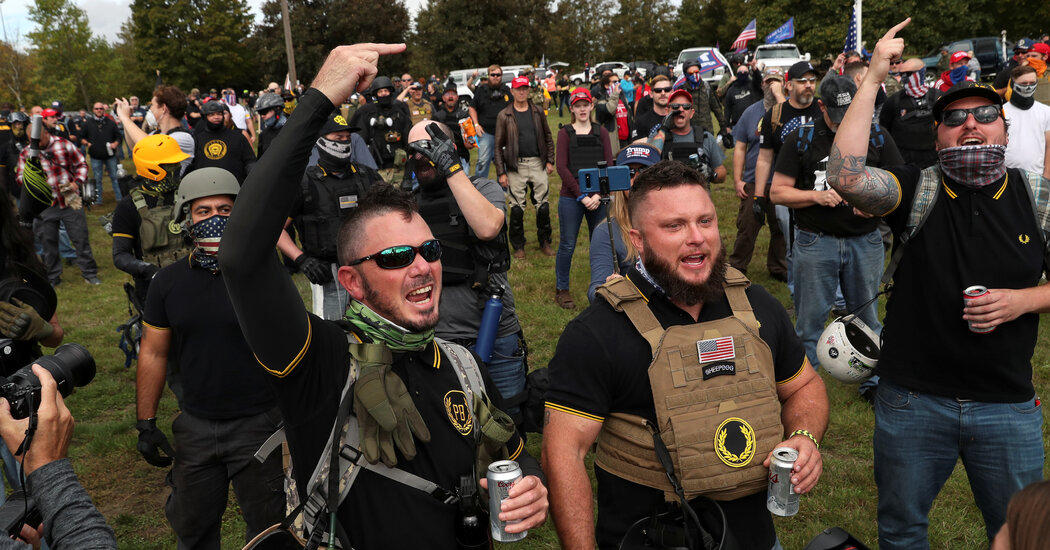 PORTLAND, Ore. — Hundreds of law enforcement agents swept across Portland on Saturday, making targeted arrests, shutting down intersections and seizing weapons in a largely successful effort to keep opposing political rallies across the city from erupting into violent conflict.

A rally organized by the Proud Boys — a far-right group notorious for engaging in brawls — had led Gov. Kate Brown to declare a state of emergency ahead of the events, which also included rallies organized by local protest groups whose members had announced that the outside group was not welcome.

At the Proud Boys gathering, where some people wore tactical gear and carried weapons, there was some brief conflict when a handful of outsiders arrived and were quickly surrounded by a crowd. Video posted by a local journalist showed a man kicking someone who had been knocked to the ground. Police said they were investigating the assault.

About half a mile away, on the other side of Interstate 5, about 200 people gathered peacefully with Black Lives Matter flags and made presentations about the history of that corner of the city, where many Black families first established roots during World War II.

Dre Miller, an activist with one of the organizing groups, said the groups had been approached by city officials asking them not to go forward because of the possibility of conflict. But he said the group took precautions, including setting up a car caravan to minimize chances of conflict as ralliers departed. And by sticking to their goals of highlighting the history of racism in the neighborhood where the Proud Boys had scheduled their rally, he said, the gathering was one of the most peaceful he had been to in recent weeks.

“Our Black organizers are going to stick together and stick to the message,” he told the crowd.

The Proud Boys chairman, Enrique Tarrio, said he was grateful that the police presence — estimated by the Oregon State Police at 500 officers — had kept the groups apart.

Political and law enforcement officials had expressed fears that Saturday’s competing events could become violent, as they have in weeks and years past, especially with recent gunshots fired by both sides on the streets of Portland and the tensions of a presidential campaign.

But what was setting up to be a violent showdown in the middle of downtown Portland began to change when the Proud Boys altered their plans, moving their rally to a relatively remote park on the northern edge of the city, while groups such as Rose City Antifa announced that they would gather at a different park miles away.

Downtown Portland has been rocked by protests this summer, first over the police killings of Black people, and later over the Trump administration’s move to send federal agents to the city in an attempt to quell the demonstrations.

They have escalated on recent weekends, when right-wing groups and racial justice protesters have engaged in the streets. In one case, authorities said, a right-wing activist in mid-August fired gunshots from a vehicle. At another, a right-wing activist brandished a gun. An antifa supporter shot and killed a far-right demonstrator during a clash on Aug. 29, the police said.

Portland has not been the only scene of unrest across the country. Demonstrations across the country kicked up after a grand jury in Kentucky decided not to indict either of the two Louisville police officers who shot Breonna Taylor, a Black emergency room technician, in her own apartment.

The Proud Boys had billed their gathering in Portland as an opportunity to counter the city’s long-running racial justice protests, with Mr. Tarrio posting online that “antifa is in for a bad time” if law enforcement was not present.

Several hundred people gathered at Delta Park on the city’s north edge, mingling, drinking and shouting. Some in the crowd broke into expletive-filled chants against antifa, the loose group of activists who sometimes use violence to stop people from promoting views they deem fascist or racist.

In addition to the assault reported by the police, there were several other confrontations when people suspected by members of the crowd of being antifa activists walked into the area.

A few Portland police officers, who had largely stayed away from the center of the event, briefly entered the park and tried to defuse the skirmishes. A helicopter circled overhead as the proceedings began with the national anthem and the Pledge of Allegiance, and a host of speakers began condemning the racial justice protesters who have gone nightly into Portland’s streets, as well as the city’s leaders.

Along with the Black-led gathering nearby, hundreds of other local protesters gathered a few miles away at Peninsula Park for a day of crafts and other activities. A group of black-clad demonstrators loaded their own makeshift plastic shields from a bus on their way to the rally, while medical crews set up tents.

Doreen McGrath, a 63-year-old activist, said she had driven in with a group of about 25 people from Seattle. Their group stood on the outskirts of the gathering, chanting and waving signs. “Hey there, Proud Boys, you better hide,” they chanted. “We can see your fascist side.”

Authorities reported arresting three people, and officers also confiscated at least two hardened shields. “We will seize weapons and shields as can be done safely and as resources allow,” a spokesman said.

The scene was different at the Proud Boys venue, where a man told those who had come together in the early afternoon that he had 30 shields to give out. The man arrived at the gathering with vehicles emblazoned with the words “American Wolf,” seemingly referencing an armed civilian militia-like group based in Washington State.

Later, the Portland Police pulled over a truck carrying Proud Boys supporters as they were leaving and seized guns, baseball bats and several shields.

The Proud Boys has strongly criticized Mayor Ted Wheeler of Portland for not taking a stronger line against the protesters who clashed with agents outside of a federal courthouse downtown in nightly confrontations over several weeks. The Proud Boys welcomed Ms. Brown’s emergency order, which also allowed state and local police to use tear gas, which the mayor had banned city police officers from using.

In a statement last week, Mr. Wheeler, a Democrat, said he feared the arrival of Saturday’s demonstrators more than the ongoing demonstrations against racial injustice in his city.

“I categorically condemn violence of all kinds by all people,” Mr. Wheeler said in a statement. “But let me be clear, the alt-right and white supremacist groups organizing to come to Portland on Saturday present the greatest threat we’ve faced so far.”

The protests over police violence and racial justice has continued not just in Portland, but in cities across the country.

Protesters in Louisville faced off with the police again on Friday evening, with the police firing flash-bang grenades and arresting 22 people; a few hundred people marched through the city on Saturday evening.

In Philadelphia on Saturday, dozens of Proud Boys marched through downtown city streets, followed by police officers on bikes. Some carried American flags and Trump 2020 flags while chanting derogatory comments about antifa, videos on social media showed. Some onlookers heckled them, mocking their appearance and clothing.

As the Proud Boys rally came to an end in Portland, police directed traffic out of the park, funneling motorists directly onto a freeway that would take them over the Columbia River — out of the city and out of the state.