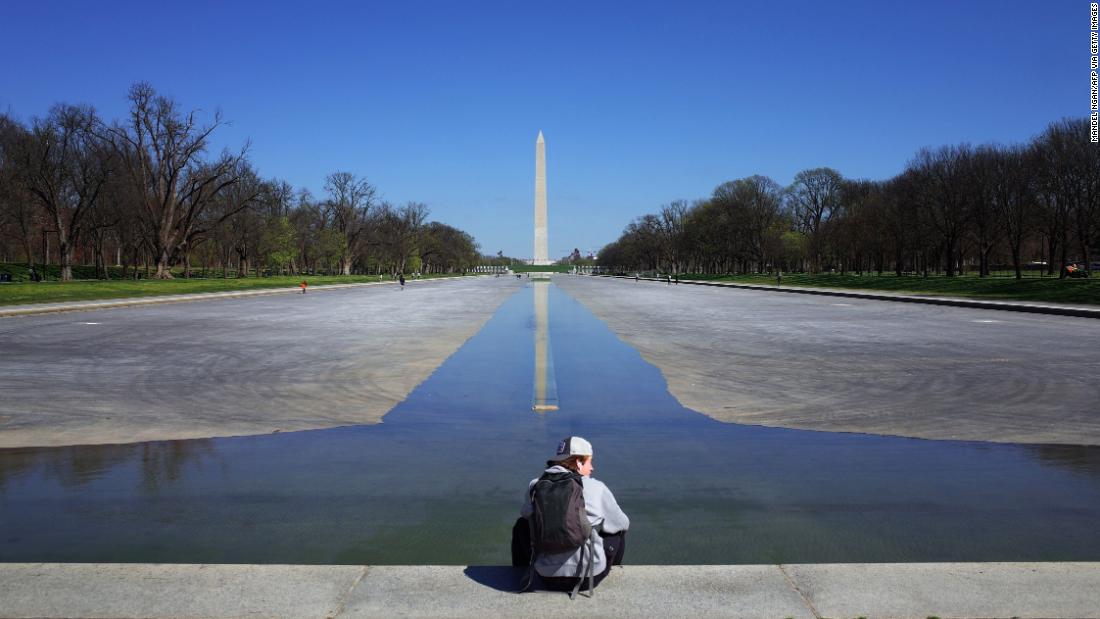 Being the political geek that I am, I usually love those moments. Who is talking to whom? What are they saying to one another? Why are they laughing?

But observing that ritual late Wednesday night — while watching it on C-SPAN, obediently social distancing on my couch — sent shudders down my spine.

You wouldn’t know it by watching them.

Alarmed, I texted a senator asking what they were thinking. Why were they so close to one another? The senator, trying to keep it light, responded, “Yes, we are an oddly tribal, herding bunch. Even now.”

It was a flash of Washington normalcy, and it was jarring.

Like so many of us, the first and only time I felt a disturbance in the force here in Washington that came close to this was on September 11, 2001.

I was a CNN producer covering Congress back then, and I will never forget rushing into the Capitol to try to get to work soon after the Twin Towers were hit, only to be forced right back out the door — evacuated because a plane had just hit the Pentagon across the river.

Then, while I was trying to help a cameraman get a signal up to broadcast from the lawn of the Capitol grounds where lawmakers, staff and press were waiting — hoping to get back into the building — there was a chilling moment I will never forget.

Capitol Police officers started to yell at the tops of their lungs for all of us to “run, run for your lives!”

People were running away so fast from the Capitol that some even lost their shoes along the way. We later learned that the police had been told that a plane was likely headed for us at the Capitol.

That plane was Flight 93, which never made it past a field in Shanksville, Pennsylvania, thanks to the bravery of passengers on board, who forced a crash-landing before their aircraft could be used as a missile hitting a landmark target — like three other planes had that morning.

There was a lot of fear that whole day, and in the days afterward, that more attacks were coming. They never did, but an invisible enemy, as President Donald Trump calls the coronavirus now, was still lurking as far as we knew. It was a terror that tied our stomachs in knots — a lot like we feel now.

Still, the post-9/11 atmosphere in Washington was obviously also far different from what we are experiencing now with Covid-19.

The “don’t let the enemy win” mentality that took hold in Washington then is really hard to replicate when the enemy is a virus that we can beat only by staying physically apart.

I was there as the sun went down on 9/11 and lawmakers of both parties crowded together on the Capitol steps and spontaneously sang “God Bless America.”

Physically coming together comforted the nation then. Now, that could be fatal.

To me, the cherry blossoms are the most vivid example.

This is usually the best time of year in DC, when these beautiful gifts from Japan in 1912 bloom and draw tourists and locals alike to the Tidal Basin near the Jefferson and Martin Luther King Jr. memorials.

But crowds are public health officials’ worst nightmare right now. Washington Mayor Muriel Bowser had to order DC police and the National Guard to restrict traffic around the area in order to keep people away.

I am lucky enough to live close to the Kenwood neighborhood in Maryland, in suburban Washington, where there are several streets lined with flowering cherry trees.

I took my old convertible, put the top down before dusk one night, and my 8-year-old son, Jonah, and I got a quick peek at the fleeting beauty that is so quintessential DC. But we did it carefully, Covid-19 style.

Speaking of being lucky — I am superstitious, so I am almost afraid to type this, but I am counting my blessings every second that my nearest and dearest are doing OK. I check in with my parents daily, who are taking this seriously and are hunkered down. Same goes for my brother and his family in New York and my boyfriend in California.

Like parents all over the country, I am getting emails from my son’s amazing teachers, who are setting up at-home learning that will start on Monday.

I am thankful that, because the weather is getting better, my son can play outside.

The rhythmic pounding of the basketball has become a soundtrack of my day.

The warmer Washington weather usually means that people flock to restaurants to sit outside and linger over an iced tea, or something stronger. But now there is none of that. Like cities all across the country, DC restaurants are takeout only.

That means the K Street lobbyists on expense accounts who are usually dining out are now relying on food delivery apps — as they meet with clients virtually, not over a fabled three-martini lunch.

Reporters like me are thankful that this is happening in the age of advanced technology, where we can broadcast from home.

In my case, I was even able to interview House Speaker Nancy Pelosi live on CNN from my basement (I may or may not have been barefoot).

I wrapped my week on Friday in the same place — my basement — interviewing Senator and former presidential candidate Amy Klobuchar, yet I talked to her as a wife whose 52-year-old husband has Covid-19. He is thankfully getting better and had been released from the hospital — but is still pretty sick and quarantined alone in their apartment.

“It is something that so many Americans know right now. They can’t go visit their loved ones. They’re relying on these incredible health care providers, that they only get to talk to them over the phone,” Klobuchar told me, describing how she is staying with a colleague and has to wave at her ill husband from outside a window.

As she spoke to me from the Senate side of the Capitol, the House was passing the $2 trillion relief package to send to the President’s desk.

A lot of House members were furious about having to return to Washington, arguing that the bill could have been approved by voice vote to avoid asking lawmakers to move around and get on planes — the very thing leaders across the country are asking citizens not to do.

After all, the coronavirus had already hit the House of Representatives — Reps. Mario Diaz-Balart of Florida and Ben McAdams of Utah tested positive for coronavirus last week, and Reps. Joe Cunningham of South Carolina and Mike Kelly of Pennsylvania announced Friday they have it too.

One lawmaker texted me from the House floor that the House physician was making a rare appearance there during the Friday debate, as members — including the House speaker — made sure to wipe down the shared microphone and podium before speaking.

Unlike their colleagues in the Senate a few days earlier, House members did practice social distancing, spreading out and sitting about three seats apart from one another.

My colleague Manu Raju told me that House members were trying so hard to stay away from one another that they sat in the upstairs gallery overlooking the floor, where the public and reporters usually sit.

It was against that backdrop that Rep. Tom Massie, Republican of Kentucky — who had insisted that the House come back in the first place — attempted to force a roll call vote to show his opposition to the unprecedented legislation. It would have kept his colleagues hanging around Washington another day.

Congressional leaders tried to twist Massie’s arm — even from 6 feet away. In the end they worked around him.

The House approved the bill and members headed for the exits, leaving Washington for the foreseeable future.

Now this town is more quiet than I have ever seen it since I came here for college three decades ago.

It’s eerie, but it now mirrors many other formerly bustling American cities.

It is, for now, the new normal.