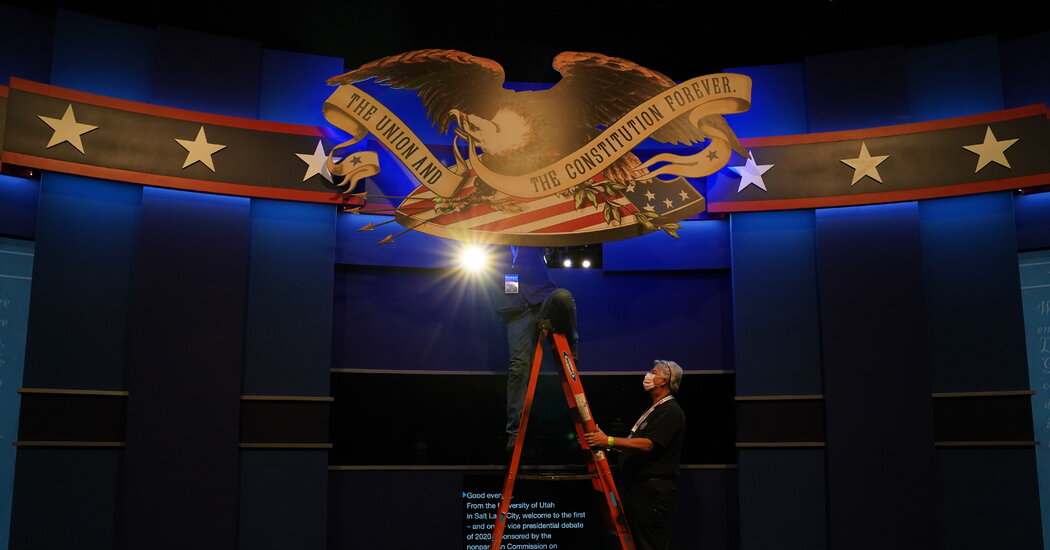 The last time President Trump and Joseph R. Biden Jr. debated each other, the nation was left grappling with Mr. Trump’s attack on election integrity, his refusal to categorically condemn white supremacists and bitter exchanges of a type rarely seen in American presidential politics.

That was last week.

Now, in a stark reminder of the tumultuous nature of the 2020 race, all of those issues — which are of significant importance to American voters — have been eclipsed in the political dialogue by a fight over health precautions and transparency that is set to define the next presidential debate, scheduled for Oct. 15.

Mr. Trump, who has tested positive for the coronavirus, has insisted that he is “looking forward” to the debate in Miami, despite great uncertainties about what his condition will be then. Mr. Biden and his team, for their part, are seeking to place the onus for a safe debate on the president, the Commission on Presidential Debates and officials from the Cleveland Clinic, who are advising on health and safety for the matchups.

“If he still has Covid, we shouldn’t have a debate,” Mr. Biden told reporters on Tuesday night after delivering a campaign speech in Gettysburg, Pa. “I will be guided by the guidelines of the Cleveland Clinic and what the docs say is the right thing to do.”

Mr. Biden’s advisers have emphasized that he intends to participate in any debate that takes place, noting that the scheduled format is town-hall-style, and they have said that the former vice president wants the chance to interact with voters. But they and other allies have also said that Mr. Trump must prove that he is not contagious, and that responsibility lies with the debate organizers and the president himself to show that he meets those standards.

“This is his obligation to meet,” Kate Bedingfield, a deputy Biden campaign manager, told CNN on Wednesday morning. “He needs to prove that he’s not contagious.”

In a follow-up statement, a spokesman for Mr. Biden, T.J. Ducklo, said: “The Commission on Presidential Debates and the Cleveland Clinic will determine the health and safety protocols for next week’s debate. This is their responsibility, and we expect they will take it seriously.”

For Mr. Trump, demonstrating that he is not infectious will be far from simple. The Centers for Disease Control and Prevention asks people with mild symptoms to isolate at home for 10 days, by which time they should stop being infectious. But some people with moderate or severe illness can stay infectious for 20 days or perhaps even longer.

If the president takes a turn for the worse, “then that whole 10-day window has just gone to hell,” said Dr. Esther K. Choo, an emergency medicine physician at Oregon Health and Science University. “We want to feel really good that we’re not going to create a second super-spreader event.”

Earlier in the pandemic, the C.D.C. recommended two negative tests to indicate that a patient was no longer infectious. Since then, studies have shown that people with the illness can shed dead virus for weeks even if they are no longer contagious. That can result in a false positive result.

“Certainly a negative P.C.R. test of some sort will be really helpful,” said Dr. Jeremy Faust, an emergency medicine physician at Brigham and Women’s Hospital in Boston, referring to a laboratory-based test that can detect the virus. “But a positive P.C.R. test would be would be difficult to interpret.”

If the president is given a P.C.R. test, doctors could look at a value called “cycle threshold,” a proxy for how much virus there is in a body, said Dr. Céline Gounder, an infectious disease physician at Bellevue Hospital Center in New York. Or they could use antigen tests, which are less sensitive and detect the virus only if people have enough of it to be contagious.

A negative test may also have no bearing on Mr. Trump’s health or fitness on the day of the debate. But doctors said it was difficult to predict his progress without an accurate timeline of his illness. The White House has so far refused to say when Mr. Trump last tested negative.

“The trick here is, when was the president ‘symptomatic’?” Dr. Gounder said. “Because all we’re ever told is he feels great, but we’re never really given a very objective readout on what his symptoms have been and when.”

Many patients do well in their first week and suddenly get worse sometime during the second or third week after the onset of symptoms. Dr. Sean Conley, the White House physician, said on Wednesday that the president had developed antibodies, which might clear the virus from his system. But that may not mean much in terms of his symptoms over the next week, Dr. Faust said.

“At day 21, you could be fighting for your life in the I.C.U., and you actually don’t necessarily have that much live virus in your body,” Dr. Faust said. “At that point, it’s just your immune system, the inflammation portion of the disease.”

Even if Mr. Trump feels well, a man of his age, weight and general health is likely to feel extreme fatigue, as many people with Covid-19 do, doctors said.

“We know that as of Monday, he seemed winded going up a flight of steps,” said Dr. Uché Blackstock, an urgent care doctor in Brooklyn, N.Y. “For the debate, he’s going to have to stand up for 90 minutes and engage in a dynamic conversation — from what I saw on Monday, I don’t know if he’d be prepared for that.”

Mr. Biden’s campaign has not publicly laid out detailed criteria that it wants to see the president meet before a debate, saying only that it will defer to medical experts. And plans and potential rules for the debate are in flux.

“I don’t think that President Donald Trump should be coming to Miami when he has been infected with coronavirus,” said Representative Debbie Mucarsel-Powell, a South Florida Democrat.

Mr. Biden and his campaign have for months sought to make the race a referendum on Mr. Trump and, in particular, his stewardship of the virus response. Mr. Biden’s team believes that the president’s conduct around his diagnosis has further highlighted the contrasts between the two campaigns and their approaches to a virus that has killed 211,000 people in the United States and caused staggering economic fallout.

“I think it’s a tragedy the president deals with Covid like it is something not to be worried about when already 210,000 people have died,” Mr. Biden told reporters Wednesday evening, according to a pool report.

Mr. Trump has mocked masks, held large-scale rallies and minimized the risks of the virus even after contracting it. “Don’t be afraid of Covid,” he tweeted on Monday. After taking a drive with Secret Service agents to greet supporters on Sunday — alarming some medical experts — he returned to the White House from the hospital on Monday and ripped off his mask, even as positive cases among his staff continued to grow.

Mr. Biden had moved to take down negative ads after news of Mr. Trump’s positive test last week, but with the president out of the hospital, the Biden campaign confirmed Wednesday that it was resuming “contrast and negative spots” along with pressing an affirmative case for the former vice president. The president had already resumed his attacks in recent days on Democrats, including Mr. Biden.

Representatives for Mr. Trump’s campaign did not respond to questions about the president’s plans for the debates and around testing.

Former Representative Sean Duffy of Wisconsin, a Republican who has attended Trump rallies during the pandemic, dismissed any idea that Mr. Trump’s approach to the virus set a bad example or was imprudent.

“Everyone’s making choices,” he said. “They assess risk and make choices that are right for them, their families. Some say they are going to wear masks, some choose not to. In a free society, that’s what we allow for.”

Mr. Biden, by contrast, has called for mask mandates and has cast wearing a mask as a patriotic duty. He faced criticism for months — from Republicans and some Democrats — for running an exceptionally cautious campaign with very little in-person campaigning. Even now he is holding only tightly controlled, socially distanced events. But in a stark reversal of campaign activities, it is now Mr. Biden who remains on the trail, while Mr. Trump is at home.