A Split Decision for Democrats 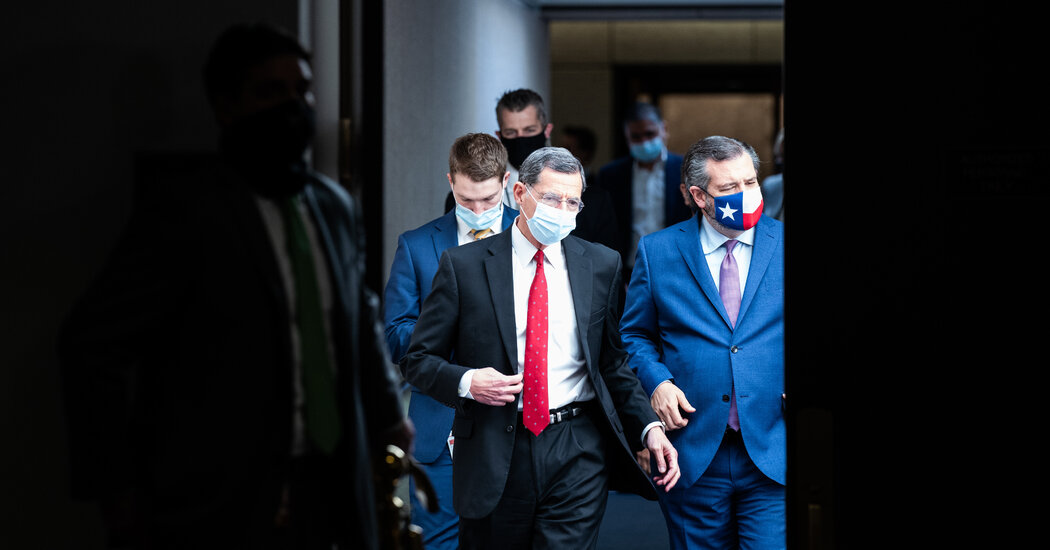 WASHINGTON — Americans who turned out in record numbers for the election were willing to weigh a change in course at the White House after four tumultuous years of President Trump, but the unfolding results showed that voters were not ready to hand unfettered control of the government to emboldened Democrats who had pledged to pursue an ambitious agenda if they triumphed.

Despite a record-setting fund-raising bonanza and a flurry of indications that voters were deeply dissatisfied with Mr. Trump, disappointed Democrats came up well short of their aspirations to seize clear control of the Senate and pad their numbers in the House. Instead, they watched gloomily on Wednesday as their path to the Senate majority narrowed while they absorbed unexpected losses in the House.

The split political decision underscored the reality that even as they turned away from the chaos of a divisive Republican president, voters wanted to hedge against Democratic hegemony in the nation’s capital and in statehouses around the country. Far from the so-called blue wave that many Democrats had imagined, the election was shaping up to be a series of conflicting squalls pointing in different directions that, above all, appeared to promise continuing division at all levels of government.

In some ways, the configuration could be tailor-made for former Vice President Joseph R. Biden Jr., should he ultimately prevail, which appeared increasingly likely on Wednesday. And it mirrored the decision that Democrats made this year in choosing Mr. Biden as their standard-bearer, elevating him over far more progressive contenders.

Mr. Biden sees himself as an old-school deal maker, someone who can operate in the more conventional political environment that voters seemed to be yearning for by delivering mixed outcomes like re-electing Senator Susan Collins, the centrist Republican from Maine, while delivering three of the state’s four electoral votes to Mr. Biden. But there are real questions of whether those old days of comity and compromise are gone forever.

Should Mr. Biden win, the victory of Ms. Collins and other Senate Republicans targeted by Democrats means he is likely to have to contend with a majority led by Senator Mitch McConnell of Kentucky, a man with a recent history of using the majority to thwart Democratic presidents. The Biden-McConnell dynamic could force the new administration to scale back legislative goals on immigration, health care, the environment and economic policy. It could also compel Mr. Biden to negotiate with Republicans on his nominees for the executive and judicial branches, who would need to win Senate confirmation. Progressives who had been expecting big wins on Tuesday that would allow them to rush forward with bold new initiatives were headed for disappointment.

It is an institutional arrangement that some believe could force the bipartisan bargaining that has been so absent in recent years. But it could also be a prescription for a continuation of the partisan paralysis that has held Congress in its grip.

Mr. Barrasso argued that Democrats had erred in believing that deep public dissatisfaction with Mr. Trump would enable them to knock off seasoned Republican incumbents, and that they had gotten ahead of themselves by publicly laying out plans to make sweeping changes that went beyond what most voters wanted. Those included threats to eliminate the filibuster, push through an aggressive legislative program and add seats to the Supreme Court to counterbalance the three justices Republicans had installed over Democratic charges of abuse of power.

“Their own members were talking about these things, and many Americans felt that was just too radical,” Mr. Barrasso said. “People saw this as scary.”

Republicans seized on the talk of court packing in particular, emphasizing it as a colorful illustration of ways Democrats could institute far-reaching changes in Washington, a prospect that evidently rattled some voters.

Democrats still held out hope on Wednesday of pursuing a long-shot path to Senate control, should Mr. Biden be elected and their candidates succeed in toppling Georgia’s two Republican senators in a pair of races that both appeared headed for runoffs in January. Still, as they contemplated falling short, Democrats argued that their main problem this year was simply political geography: To gain the majority, they had to unseat Republicans in states carried by Mr. Trump, when Senate races typically go in the direction of the state’s presidential race.

“The map was very difficult for us,” said Senator Chuck Schumer of New York, who formulated the Democratic campaign strategy. He noted that Republicans had been defending seats in just two states carried by Hillary Clinton in 2016: Maine and Colorado. Mr. Schumer’s decision to try to expand the playing field to force Republicans to expend more resources and give Democrats a chance at the majority succeeded to a degree by putting more races in play. But it only went so far.

With the exception of Maine, where Ms. Collins defied the odds, the emerging presidential results appeared to be corresponding to the Senate outcome, with Democrats winning in Colorado, where Mr. Biden prevailed, and in Arizona, where he had opened a lead. But it meant that Republicans were able to survive well-funded Democratic challenges in states like Iowa, Montana and probably North Carolina.

Despite expectations in both parties that Mr. Trump’s presence on the ballot would hamper Republicans in competitive states and districts, the president appeared to have had substantial coattails in conservative-leaning states, turning out core constituencies to re-elect the incumbents crucial to maintaining the party’s hold on the Senate. In other areas where the president was weaker, such as Democratic-leaning Maine and more conservative suburban House districts nationwide, voters seemed to have stuck with the Republicans they knew rather than taking a chance on Democrats.

That was the case in the suburbs of Omaha, where Mr. Biden won a potentially crucial electoral vote, but Representative Don Bacon, a Republican, beat out a liberal Democratic opponent, Kara Eastman, to keep his seat. The story looked similar for the Republican veterans Ann Wagner of Missouri, Steve Chabot of Ohio and Rodney Davis of Illinois, all of whom held onto their jobs. And in New York, three Democratic challengers were trailing in their efforts to oust Republicans, while two first-term Democrats elected in the party’s 2018 midterm House sweep — Representatives Max Rose in Staten Island and Anthony Brindisi in Central New York — were in danger of losing.

Republicans gained ground partly by portraying Democratic challengers and incumbents — no matter how moderate — as socialists bent on forcing an extreme liberal agenda on their constituents, such as defunding police departments and enacting strict and costly environmental regulations.

“The suburban voter rejected the radical left,” said Corry Bliss, a top Republican strategist who was one of the many people who had warned of a grim environment that could cost his party House seats this year. “They respect cops, don’t want the Green New Deal and don’t want to be taxed to oblivion.”

The dynamic was playing out on a smaller scale across the country, as Democrats also fell short in their efforts to sweep statehouses that Republicans have controlled for years in Iowa, North Carolina and Texas, denying them crucial power over policy on issues like abortion, guns and police reform as well as control over the redrawing of state and national electoral maps.

During the campaign, Mr. Biden, who served as a senator from Delaware for more than 35 years, talked about his experience working across the aisle and suggested he could win over the half dozen or so Republicans needed to advance legislation. But that was provisioned on a Democratic majority, and on Wednesday, he was facing a situation where he could win the White House while Republicans still controlled the Senate. Mr. Biden and Mr. McConnell have a history of hammering out agreements, but the terms did not always meet the approval of fellow Democrats.

Rahm Emanuel, who as White House chief of staff to President Barack Obama clashed with Mr. McConnell in 2009 and 2010, predicted that the Republican leader would not be able to replicate his strategy of relentless obstruction given the severe issues confronting the nation during a pandemic. And he noted that Mr. McConnell would need to protect Republican Senate candidates running in 2022 in states like North Carolina, Ohio and Wisconsin.

“He can’t run a scorched-earth policy again,” Mr. Emanuel said. “He knows that map is skewed against him.”

Asked on Wednesday in Louisville, Ky., how he would work with Mr. Biden, Mr. McConnell was not ready to concede the election. “I’m not sure whether I will need to or not,” he told reporters.

But as he closed out his campaign on Monday, Mr. McConnell made clear to chanting supporters that he had zero tolerance for some of the changes Democrats had hoped to institute.

“When it comes to things like ending the filibuster, D.C. statehood, Puerto Rican statehood, packing the Supreme Court, it will not come up in Mitch McConnell’s Senate,” he vowed. “I’m at the top of my game and ready for another term to not only deliver for Kentucky, but set the agenda for the nation.”