A Thanksgiving Parade, Unfazed by Snow or Wind, Takes on a Pandemic 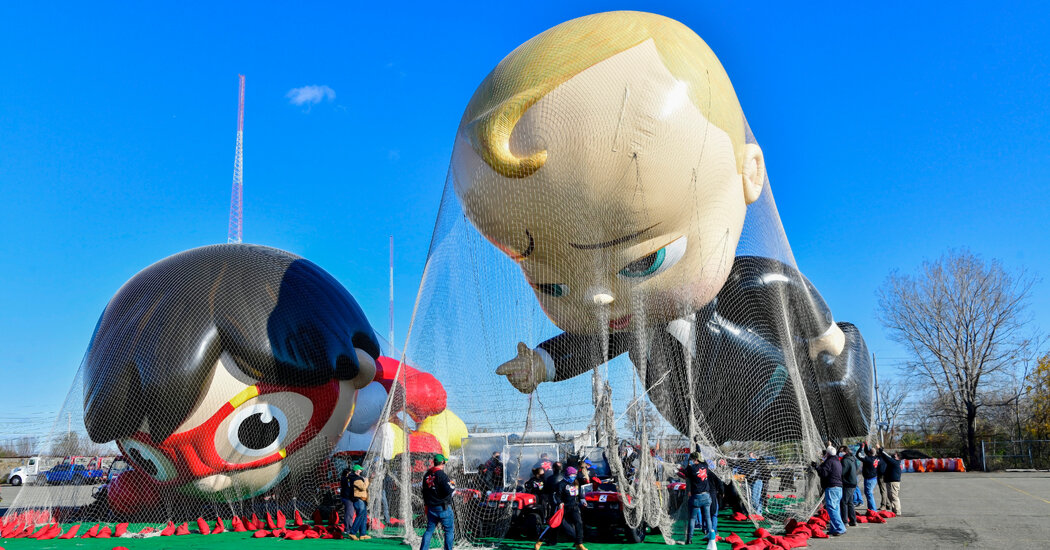 Not snow, not rain, not gusting winds or the Great Depression have caused the cancellation of the Macy’s Thanksgiving Day Parade in its 96-year history. On Thursday it seems poised to power through a pandemic.

The other parades of New York City have fallen one by one, as city and state officials determined it would be unsafe to proceed with the St. Patrick’s Day Parade, the Pride March and the Puerto Rican Day Parade because they draw such huge crowds. The West Indian American Day Parade on Labor Day was forced to go virtual for similar reasons.

But the Thanksgiving Day Parade is sailing forth, largely because the millions who typically attend have been told to stay home and the event has been scaled down to a television show, albeit one that many view as itself a ritual marker of the holiday.

So the parade route will be one block long, not two miles. Those high school bands from around the country will not be marching, and instead of some 2,000 balloon handlers to coordinate, there will only be about 130.

But anyone who thinks staging this year’s parade has been a layup, not a singular feat of logistical legerdemain, has been dipping too deeply into the holiday punch.

Starting in March, the parade planners at Macy’s and NBC, which airs the event, had to rip up the carefully calibrated script and come up with an entirely new blueprint, one that evolved as new questions surfaced day after day.

What are the physics of flying the balloons, typically handled by people, if one uses squat utility vehicles instead?

How, and when, to do coronavirus tests and temperature checks for the 960 people working on the parade?

How to arrange for socially distanced stage numbers that capture the magic of Broadway without endangering anyone’s health?

How to break it to the balloon handlers and the marching bands, some of whom view the parade as somewhere between a lifelong dream and a religious event, that they won’t be involved this year?

“What I knew about Thanksgiving Day a month ago is different from what I know now,” said Susan Tercero, who is the executive producer of the event for Macy’s. “How do you plan something in June that’s going to happen in November when you have no idea where the country is going to be at then?”

History has set a high bar for canceling the parade, which has gone off every year since 1924, except for three years during World War II.

“Maybe we were crazy to think this way all along, but I think we just tried to never go there,” said Doug Vaughan, executive vice president of special programs at NBC Entertainment.

Instead, the planners kept in communication with city and state officials and responded as evidence of a second wave in New York mounted, reducing the number of participants a second time from 25 percent of their typical work force to 12 percent. Instead of about 8,000 people working a packed parade route in a normal year, the efforts of 960 people are being spread over three days of filming.

At one point, the parade planners had imagined a shortened route that still allowed for some travel down Manhattan streets. But even that was determined to be too much of an invitation for crowds, and officials ultimately landed on a stub of parade route on 34th Street between Sixth and Seventh Avenues. The result, in effect, is a broadcast set based around Macy’s flagship department store, where much of the parade has been pretaped.

Macy’s is adamant that there will be nothing to see for spectators on Thursday and police officers have been assigned to disperse any crowds that might develop. Still, police officials have reduced the detail that usually works the parade by 80 percent, said Terence A. Monahan, the chief of department.

“It’s a lot less work for us, that’s for sure,” he said. “But I’d rather be challenged to protect hundreds of thousands of people out enjoying the parade than protecting a show that people watch on TV.”

Also disappointed are the high school and college marching bands that had been selected for the lineup. Usually, Wesley Whatley, the parade’s creative producer, flies across the country to surprise band members with the news that they had scored spots on the parade route.

This year, his tour ended before it started.

The parade planners toyed with the idea of sending out film crews to capture the marching bands on their home turf, but that idea was dropped because it would involve a lot of cross-country travel, and in many cases, the young band members would have been learning remotely, away from school for several months, and unable to practice in person.

Eventually, Mr. Whatley called the directors of bands set to perform this year with the news that they could not come in November, but that they were saving them spots for the 2021 parade. The bands set for 2021 would move to 2022.

Also staying home will be most of the balloon handlers. Typically, each giant balloon — from the 49-foot-tall Astronaut Snoopy to the 53-foot-tall Pikachu is guided by 80 to 100 uniformed handlers. Those numbers were untenable during a pandemic.

So the parade team hatched a plan to offset the weight of the balloon handlers with a formation of five utility vehicles (in a typical year, each giant balloon would have just one of these vehicles anchoring it in the center). The parade’s engineering team used the weight of the vehicle plus two “standard” 175-pound people — a total of 2,985 pounds — to calculate the proper formation of handlers underneath the balloons, said Kathleen Wright, the parade’s production director.

Each of the large balloons will have about 25 humans assigned to them, either walking or riding in the utility vehicles down the blocklong parade route.

One handler who made the cut was Kathy Kramer, a Macy’s employee who has been on the balloon team for 36 years. She is a balloon pilot, who walks backward about 30 yards in front of the balloon and directs the handlers using hand signals and a whistle.

But this year, Ms. Kramer will be wearing a mask and she discovered during practice runs that it was too difficult to operate a whistle, so Macy’s shifted to hand-held electric whistles.

The balloons are being inflated overnight on the broadcast set before they fly down 34th Street. Some will make the trip live on Thanksgiving Day. Others will have had pretaped flights.

“Even though it’s a short parade this year, my stomach will start to churn on Monday and it will continue to do so until we deflate,” Ms. Kramer said.

In another bow to a special year, Macy’s has organized it so that some groups whose parades were canceled will now have a place in the Thanksgiving event. So parade watchers on television can expect to see the New York Fire Department’s Emerald Society band with their bagpipes and bearskin hats and the Lesbian & Gay Big Apple Corps Marching Band, in their rainbow sashes, all pretaped.

The dancers, stilt walkers and steel pan players who would have lit up Eastern Parkway for Carnival are being taped on Wednesday. But they will start getting their makeup done on Tuesday night because the process can take hours, said Anne-Rhea Smith, vice president of the West Indian American Day Carnival Association. She said she hopes the makeup session will resemble the preparations and feel of a typical carnival eve in Brooklyn.

“Nothing replaces that feeling,” she said, “but we’re trying our best to get as close as we can.”

In replacing the absences of the parades of past months, this event will become something of an ode to New York, at one time the epicenter of the pandemic in the United States and a cultural beacon that went largely dark in recent months. So while visitors to Lincoln Center cannot see “George Balanchine’s The Nutcracker,” this year, viewers of the parade will be able to see Ashley Bouder, a New York City Ballet principal dancer, perform as the pink tutu-ed Sugarplum Fairy. Similarly, numbers from four Broadway shows, shuttered since March, were taped in Times Square in advance of Thanksgiving week and will be part of the parade.

And despite the cancellation of the “Christmas Spectacular” at Radio City Music Hall, 18 of the 80 Rockettes will appear in their wooden soldiers costume with custom-made masks. (That particular Rockettes number was chosen because the dancers have limited contact with one another, which means no kickline.)

Hovering over the hectic planning process has been the sense that New Yorkers, and Americans, need this spirited display of joy at a time when there is much to be sad about.

That mission was also evident in 1963, six days after the assassination of President John F. Kennedy, when amid nationwide mourning, Macy’s decided against canceling the parade.

The parade went on again in 2001, as New York struggled to recover from the 9/11 attacks. The poignancy of the moment was noted in some patriotic touches: a Lady Liberty float replaced Tom Turkey, for example, and the red and white candy canes in Santa’s sleigh wore ribbons of red, white and blue.

On Thursday, as this year’s parade ends, the planners say they will begin thinking almost immediately about next year’s parade. Will it be another pandemic version, the socially distant, mask wearing, joyous-but-scaled-down kind, or will it be something people can take their kids to?

“Hopefully,” Mr. Vaughan of NBC said, “the 95th anniversary of the parade will look very different from this year.”