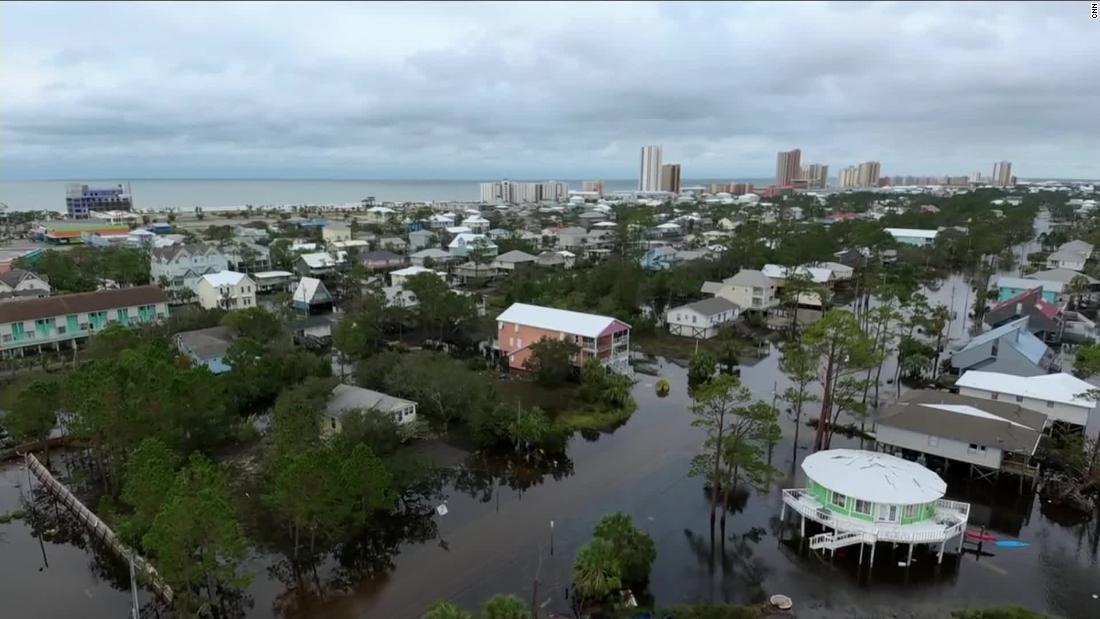 Sally’s remnants still threaten more flooding Thursday as they push into Georgia and the Carolinas.

In both states, including around Pensacola in Florida, downed trees and power lines have made roads dangerous, and authorities have set up curfews and used boats and high-water vehicles to help hundreds escape their flooded or flood-surrounded homes.

In Orange Beach, coastal neighborhoods remained covered by water hours after the storm.

“Everything on the ground floor is gone,” Matt Wilson told CNN affiliate WPMI Wednesday about his Orange Beach home, where he and his family rode out part of the deluge.

“Our house had windows blow out at 3 a.m. or 4 a.m. (Wednesday) and the whole house was shaking like a boat on the water,” he said. ” … We ended up leaving the house during the eye of the storm, and waded through about 5 feet of water to get to the neighbor’s house, arm in arm.”

Sally moved extremely slowly over these areas, dumping sheets of rain — in some places 2 feet or more — that caused extensive flooding for miles.

“My house is full of water. I’ve got 2 to 6 inches full of water in my house, everywhere,” Freeport, Florida, resident Terry Morgan told CNN affiliate WJHG.

In the Alabama resort town of Gulf Shores, Mike Vansickler told WPMI he rode out the storm in his condominium, only to kayak himself further inland later. The National Guard and rescue teams used high-water vehicles to traverse streets there, while others traveled by canoe or waded.

Water still was lapping up against homes Thursday in places like Gulf Shores and Pensacola, and more than 470,000 customers in the two states still were without power Thursday morning, utility tracker PowerOutage.us showed.
Florida resident Tammy Gibbs and her family are staying with a friend who has a generator, a day after police and National Guard troops used a kayak and a jet ski to help them from their home near Perdido Bay east of Pensacola, she told CNN affiliate WBMA.

“She looked out the window at the house, and she was like, ‘Gammy, the ocean’s in our yard,'” Gibbs told WBMA, recounting her 3-year-old daughter’s conversation with her grandmother.

Sally was the fourth hurricane to make landfall in the United States this year — the most to hit by the same date in 16 years. It came ashore 16 years to the day after Category 3 Hurricane Ivan struck roughly the same areas.

Sally threatens Georgia and the Carolinas

Sally had weakened into a tropical depression by Wednesday night, but it was dumping large amounts of rain in parts of Georgia and the Carolinas on Thursday, and could unleash serious flooding there.

Central Georgia could receive 6 to 12 inches of rain by storm’s end. Central and upstate South Carolina could get 3 to 10 inches, and parts of North Carolina and southeastern Virginia could receive 4 to 8 inches, the National Hurricane Center said.

Flash flooding and river flooding are likely in many of these areas, forecasters said.

More than 34,000 utility customers were without power in Georgia Thursday morning, according to PowerOutage.us.

“We have already seen significant flooding in portions of Alabama from this rain band. Please remember: Turn around, don’t drown,” the National Weather Service in Atlanta tweeted.

Curfew in Pensacola area for 3 nights

“We are still in an evaluation and lifesaving recovery mission, and we need to be able to do that job,” County Commissioner Robert Bender said. “We are still evaluating our roads and bridges to make sure that it is safe.”

Crews rescued 377 people near the state’s border with Alabama and feared many more could be in danger in coming days, said Jason Rogers, the county’s public safety director.

Florida Gov. Ron DeSantis said Wednesday the danger is far from over, warning “pretty much any body of water in northwest Florida” could see a rise in levels over the next few days because of Sally.

In Gulf Shores, near where the hurricane made landfall, Doris Stiers assessed the damage outside her beach home. She was stunned.

“Looks like a war zone,” she told CNN. “Lots of destruction, homes destroyed, roofs gone. I have not had any service, power or internet. Bad night.”

Wilson, the Orange Beach resident who rode out the storm at home, said it was terrifying.

“Our house had windows blow out … and the whole house was shaking like a boat on the water. It was scary man, it really was,” Wilson told WPMI. “Our dock is obviously gone. Everything on the ground floor is gone.”

Alabama officials warned that even if the storm has weakened, residents should not let their guard down.

“The storm may have exited our local area, but it’s important to remain vigilant since many areas are still affected by lingering flood waters,” the National Weather Service in Mobile tweeted.