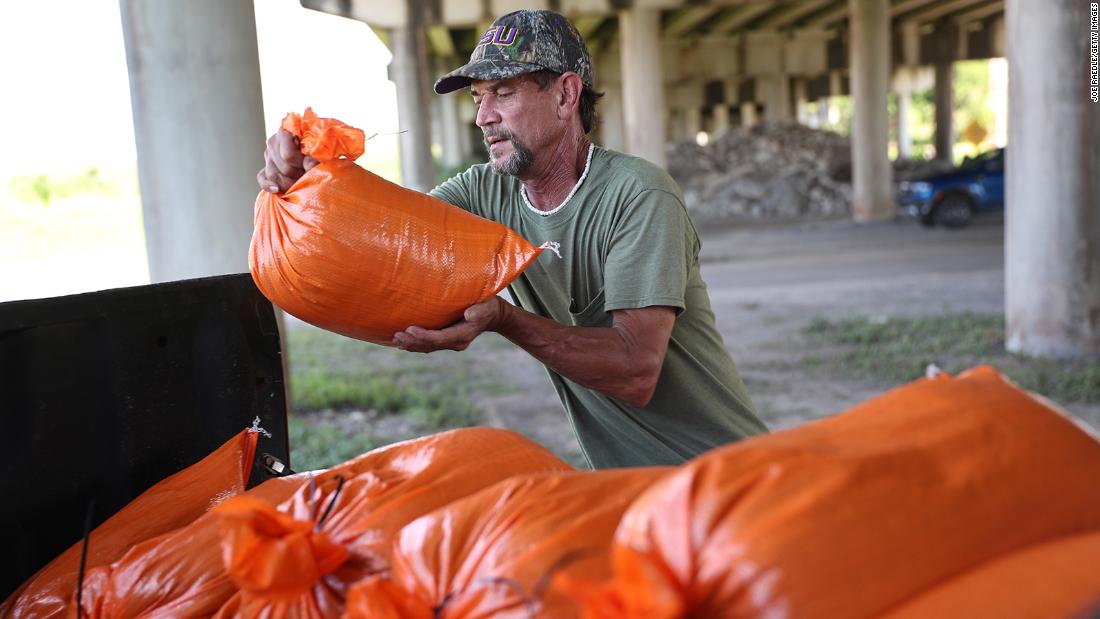 Laura had winds of 65 mph overnight as it impacted Western Cuba as a tropical storm, but it is expected to become a hurricane Tuesday as it moves west northwest at 20 mph.

Parts of Louisiana and Texas are on alert for the arrival of the storm that could reach the states as a Category 2 hurricane overnight Wednesday, according to the National Hurricane Center. But warm waters in the Gulf of Mexico mean Laura could strengthen even more if conditions are right, CNN meteorologist Rob Shackelford said.

As a Tropical Storm, Laura killed at least nine people in the Caribbean. When it makes landfall in the US, it could bring storm surge of 7 to 11 feet along portions of the coast, the NHC said.

The Gulf was predicted to be in danger of back to back powerful storms with Laura striking within miles and 48 hours after Marco.

Louisiana Gov. John Bel Edwards worried earlier in the week that “there may not be much of a window” to enact power restoration and rescue efforts between storms.

But Marco made landfall near the mouth of the Mississippi River Monday as a Tropical Storm, and later that night was downgraded once more to a Tropical Depression.

Overnight, Marco was traveling west along the Louisiana shoreline, but it will likely fizzle out over open waters as it heads toward Texas, said CNN meteorologist Michael Guy.

The tornadoes and storm surge Marco threatened to bring along with it as it moved along the Gulf Coast are no longer a source of concern, Guy said, however the storm could still be a rainmaker. Localized areas could see up to five inches of precipitation.

All eyes on Laura

With Marco no longer posing an impending threat, Edwards said Monday night all eyes are now on Laura.

His big concern is large amounts of rainfall and river flooding.

The threat of the storms have sparked evacuations in Texas. A mandatory evacuation order was issued for all residents of Jefferson County, Texas, Monday, according to the county’s Office of Emergency Management’s Facebook page. And Orange County, Texas, has recommended a voluntary evacuation for the entire county ahead of Tropical Storm Laura.

In Louisiana, residents have been preparing for the storms as well.

Long lines formed outside grocery stores in Louisiana as residents braced for both Marco and Laura.

Stacie Osborn said it took her 30 minutes just to get through the checkout line at a market in New Orleans.

“I stocked up on enough food for the week, extra water and gassed up my car just in case,” she said.

And New Orleans Mayor LaToya Cantrell said the site of the Hard Rock Hotel, which collapsed during construction in October last year, remains a public safety risk because of the building’s instability. Three people died and dozens were injured during the collapse. It took some 10 months to recover two of the bodies because of the structure’s instability.

9 people killed in the Caribbean

At least nine people have died in the Caribbean, including several in the Dominican Republic and Haiti, due to Laura.

The victims include a 7-year-old boy who died along with his mother after a wall collapsed in their home in the Dominican Republic. Another person died after a tree fell on a house.

Five people were killed in Haiti, including a 10-year-old girl, the country’s civil protection agency said.

CNN’s Holly Yan and Dave Alsup contributed to this report.