An Early Test for Biden: Managing a Divided Democratic Party 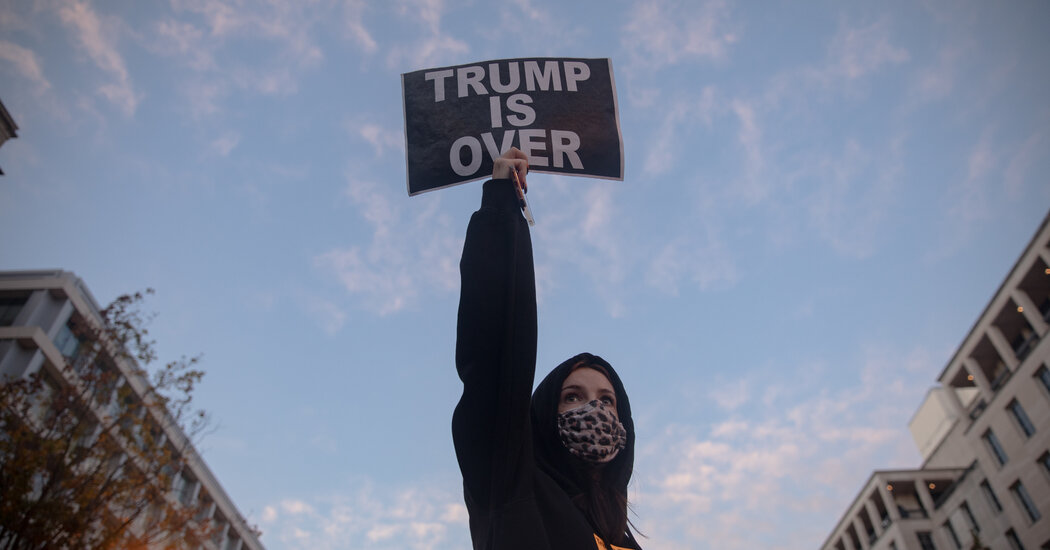 Ever since President Trump won the White House in 2016, a shocked Democratic Party had been united behind the mission of defeating him. Four years later, with the election of Joseph R. Biden Jr., the divides that have long simmered among Democrats are now beginning to burst into the open, as the president-elect confronts deep generational and ideological differences among congressional lawmakers, activists and the party’s grass-roots base.

The fault lines began to emerge within hours of Mr. Biden’s victory. Moderates argued that his success, particularly in industrial Midwestern states that Mr. Trump seized from the Democrats in 2016, was proof that a candidate who resisted progressive litmus tests was best positioned to win back voters who had abandoned the Democratic Party. Those tests included single-payer health care, aggressive measures to combat climate change and expanding the Supreme Court.

“The progressives said we need a base candidate,” said Rahm Emanuel, the former mayor of Chicago and White House chief of staff under President Barack Obama, referring to a nominee who appeals to the left wing of the party. “No we didn’t. We needed someone to get swing voters. If you campaign appropriately, you can make that a governing transformation.”

Moderate Democrats said they were hopeful the urgency of the problems confronting the nation would delay the inevitable reckoning the party faces between its ideological wings. Beyond that, they said that a disappointing showing by Democrats in congressional races — the party lost seats in the House and faces a struggle for even narrow control of the Senate — would give liberal Democrats less of a platform to push Mr. Biden to the left.

After a fiery call among members of the House Democratic caucus, in which some argued that progressives who have entertained ideas like defunding the police or “Medicare for all” had cost the party congressional seats, some Democratic leaders pushed further away from the left wing.

Representative Conor Lamb, a moderate from Pennsylvania who survived a difficult Republican challenge, said the results should be a wake-up call to the left.

“What we heard from a lot of our constituents was that they do not like the Democratic message when it comes to police in Western Pennsylvania, and when it comes to jobs and energy,” he said. “And that we need to do a lot of work to fix that.”

But after four years of pent-up frustration and energy, that may prove unlikely. By every early indication, Mr. Biden’s election has emboldened progressive energy, no matter the setbacks in the congressional races. There is an up-and-coming generation of elected Democratic officials who have been waiting in the wings, eager to take the lead in formulating a platform for the party.

After supporting Mr. Biden as a means of defeating Mr. Trump, younger and more progressive Democrats who have gained a foothold in Congress and among party activists are skeptical about his future administration. Senator Elizabeth Warren of Massachusetts, setting policy terms in a statement after Mr. Biden was declared victorious, said: “A Band-Aid approach won’t get the job done. We have a mandate for action on bold plans to meet these twin health and economic crises.”

Representative Alexandria Ocasio-Cortez of New York, a leading voice of the party’s left wing, said in a phone interview that the next few weeks would set the tone for how the incoming administration will be received by liberal activists.

“I think that’s what people are keeping an eye out for: Is this administration going to be actively hostile and try to put in appointments that are going to just squash progressives and organizing?” Ms. Ocasio-Cortez said. “I don’t envy the Biden team. It’s a very delicate balance. But I think it’s really important to strike a good one. Because it sends a very, very powerful message on the intention to govern.”

The fault lines crystallize the task ahead for Mr. Biden, who has long seen himself as a pragmatic consensus builder rather than a strict ideologue. In addition to the fractures within his party, Mr. Biden’s administration will also have to navigate a Republican Senate, unless Democrats wrest two seats in Georgia during closely watched runoff elections in January.

If the party doesn’t win those seats, an already divided Washington looks likely to endure.

Some moderate Democratic leaders urged the president-elect to head off any internal conflict by embracing policies both sides can agree on and reaching out to the left.

“The first thing I would do if I were Joe Biden is I’d propose a $15-an-hour minimum wage,” said Edward G. Rendell, the former governor of Pennsylvania and a former chairman of the Democratic National Committee. “That’s something that both sides agree on. That would be the first action on behalf of President Biden to show there are significant parts of the progressive agenda that need to be acted on.”

Given the two Senate runoffs taking place in Georgia — contests that will determine whether Mr. Biden will, like Mr. Obama, begin his first term with a unified Washington — Mr. Biden might be initially reluctant to embrace positions that could make it easier for Republicans in Georgia to paint Democrats as out-of-touch, radical socialists.

Mr. Biden has made clear he intends for his administration’s cabinet to be diverse in race, gender and sexual orientation — but a left wing that has become disenchanted with the inherent idea of representation as progress will be looking for concessions of power.

Grass-roots political groups on the left had a dual message for the president-elect: Congratulations — and here’s a list of demands. Several signaled that they expected Mr. Biden to defer to some demands of progressives, not only by selecting people from that wing of the party for key cabinet positions but also by excluding people with a Wall Street or lobbying background from the administration’s hiring process. However, Mr. Biden’s flexibility in making cabinet appointments sought by the left will be constrained if the Senate remains in Republican hands.

Jamaal Bowman, a progressive New York Democrat who will be sworn into the next Congress, took the view that Mr. Biden’s victory was not an affirmation of moderate ideology, but a testament to a diverse Democratic Party that had embraced the shared goal of defeating an unpopular president. He cited the work during the general election of progressive groups and candidates who opposed Mr. Biden during the Democratic primary, including young climate organizers like the Sunrise Movement — and said they should be rewarded.

“We have to move past the moderate-versus-liberal conversations and start speaking and moving together as a strong party,” Mr. Bowman said. “We have organizations like the Sunrise Movement and candidates like Jamaal Bowman who have gone out of our way to get Joe Biden elected.”

Ms. Ocasio-Cortez said she expected a long-term fight, particularly given the setbacks for Democrats in the congressional contests. She also cited cabinet appointments as a way to measure Mr. Biden’s ideological core.

She said some people, including Mr. Emanuel, should not play a role in the party’s future. The former mayor has been floated by some in Mr. Biden’s inner circle to lead a department like housing or transportation.

“Someone like Rahm Emanuel would be a pretty divisive pick,” she said, citing his record as mayor on racial justice and his opposition to teachers’ unions. “And it would signal, I think, a hostile approach to the grass-roots and the progressive wing of the party.”

It is unclear what kind of audience progressives will find with Mr. Biden and his administration. Throughout the year, his campaign sought to project unity through measures like a joint task force with supporters of Senator Bernie Sanders, which led a campaign to adopt some of the left wing’s policy proposals, including plans around college debt. But Mr. Biden stopped short of the biggest ideas, like eliminating the Electoral College or embracing statehood for Washington, D.C., and Puerto Rico.

Some leading Democratic Party moderates said they supported many of the ideological goals on the left but, reflecting what has long been a divide between the two wings, urged caution, particularly because of Democratic losses in other races.

“We all have to take a deep breath,” said Representative Debbie Dingell, a Democrat from Michigan, a state that Mr. Trump snatched from Democrats in 2016 but that Mr. Biden won back this year. “I know there are going to be people who are pushing for change. I’m one of those people who want Medicare for all.”

She argued that Democrats needed to be careful not to push away voters whom Mr. Trump won in 2016, or else risk another, similar candidate.

“I also know we can’t afford to have Donald Trump as president,” she said.

But Stanley Greenberg, a Democratic pollster who advised President Bill Clinton when he successfully pushed the party to the center in the 1990s, said Mr. Biden would be able to delay divisive party fights because of the enormity of the crises he faces.

“The nature of the pandemic and the economic and health crisis is so deep, he will inherit a mandate of urgency,” he said. “Unity within the party and unity within the country.”

But for some on the left, the pandemic and the resulting economic crisis were reasons to push the administration further — not to back off. They cited mistakes made as Mr. Obama began his administration in 2009, when many believed the party’s progressive wing was too deferential to the new president in a moment of economic crisis.

Nina Turner, a co-chair of Mr. Sanders’s 2020 presidential campaign, said she expected progressives to pressure Mr. Biden’s transition team and administration from the outset. When asked how open she thought Mr. Biden would be to the left, she said, “If the rhetoric that’s being used on the campaign trail is any indication, not very open.”

Still, she said, “things have an amazing way of changing once you’re in the office and you get that pressure.”