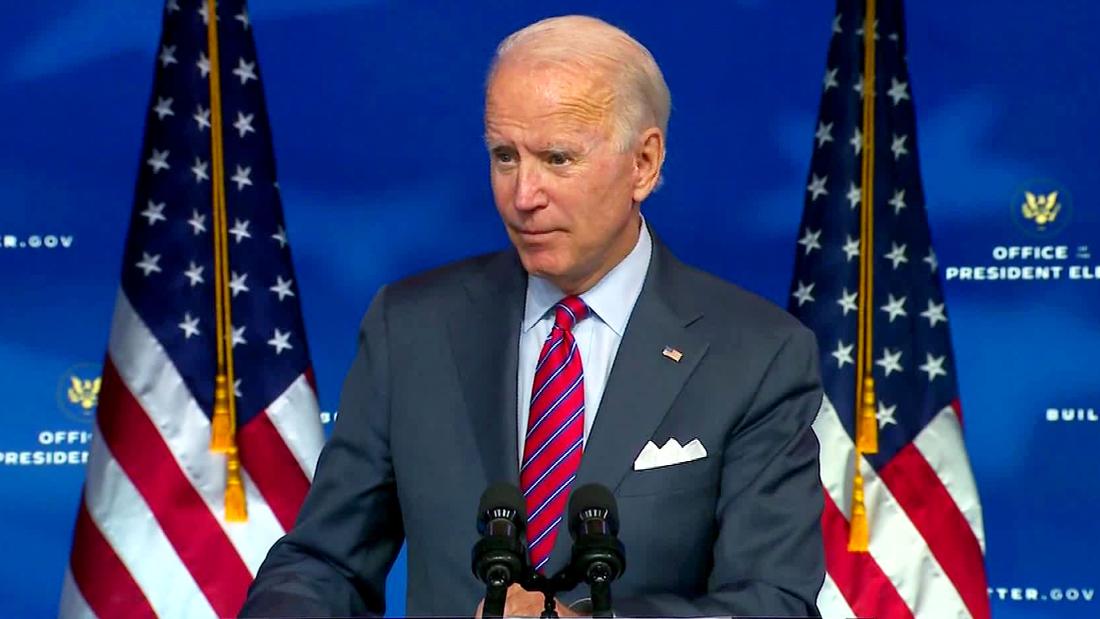 “You’re going to see significant diversity,” Biden told reporters at a press conference Friday after a week in which leaders of the NAACP and other civil rights groups signaled they are displeased that Biden hasn’t named more Black Americans to high-profile positions.

Meanwhile, the Congressional Hispanic Caucus ramped up the pressure by airing their frustrations about Biden team’s handling of discussions with New Mexico Gov. Michelle Lujan Grisham, who they want to see as his nominee for health and human services secretary, and put forward specific names they want for attorney general.

But Biden refused to be boxed in Friday when asked whether he would nominate a person of color to fill the posts of attorney general or secretary of defense, the remaining two of the four premier Cabinet positions — after he named a White man and a White woman to serve head the State Department and Treasury.

“I’m not going to tell you now exactly what I’m doing in any department, but I promise you, it’ll be the single most diverse cabinet, based on race, color, based on gender, that’s ever existed in the United States of America,” the President-elect said.

A day earlier he revealed during an interview with CNN’s Jake Tapper that he plans to meet with the board of the NAACP early next week, to make it clear he’s listening to these myriad concerns as he plays a complex game of chess.

Still, the process has pointed to two universal truths: it’s going to be hard to please everyone and, for Biden, trying to bridge the fractious divides of the Democratic Party may end up being a zero-sum game.

The pressures converging on Biden began to surface last month when he announced some members of his national security team, but notably held off on naming his defense secretary and CIA director.

Multiple people familiar with transition discussions said that the deliberations about some of the yet-to-be-announced positions are being shaped by discussions — and intense lobbying — on the question of racial diversity in the new administration.

Veteran Pentagon official Michèle Flournoy, for example, was once seen as a lock for defense secretary, but her prospects are now in limbo, in part because of the concerns over diversity.

“They’re absolutely not going to have the top four Cabinet positions be white,” one person familiar with transition discussions said — a reference to the four key Cabinet positions of secretary of state, treasury secretary, defense secretary and attorney general.

There was the perception of a domino effect of sorts after Biden named Tony Blinken as his secretary of state, sources said. Before Election Day, some Democrats speculated that Susan Rice, Obama’s former national security adviser, who is Black, could get that role, but she would have faced steep headwinds during the Senate confirmation process if that body remains under Republican control.

When the job ultimately went to Blinken — followed by the Treasury role being given to Janet Yellen, the former chair of the Federal Reserve — both private and public pressure increased for the Biden team to ensure that there are non-white individuals named to the remaining top roles like defense secretary, attorney general and health and human services secretary.

In another example, Biden is interested in naming Alabama Sen. Doug Jones, who lost his seat in November, as a contender to be his attorney general, but that’s now also complicated by the fact that both Blinken and Yellen are White.

Even Biden’s historic selection of Harris, who will be the first Black and first female vice president, has added a wrinkle to the process. California Gov. Gavin Newsom must name her replacement and some of the top figures under consideration, California’s Attorney General Xavier Becerra and Rep. Karen Bass, are also in contention for Biden Cabinet posts.

CNN reported Friday that Becerra is now emerging as a “contender of interest” to serve as Biden’s HHS secretary, according to two people familiar with the matter.

After a heated election, key groups want to see their voices reflected

As he selects his team, Biden is facing the legacy of years of internecine battles within the Democratic Party, most notably the rift between progressives and centrists that helped Donald Trump win in 2016. Biden clinched the presidency in November in large part because the diverse coalitions within the Democratic Party united behind him. Now each of them wants to see their due.

Black voters, and particularly Black women, showed their political power by lifting Biden to victory in the South Carolina primary and later in states like Georgia, building on years of work organizing, invigorating and mobilizing like-minded voters to cast ballots.

Latinos helped the former vice president win in states like Arizona and Nevada — but Trump’s surprising strength within that demographic group, according to exit polls, demonstrated that Biden has a great deal of work to do if he wants to show he can represent their interests in his administration, and nominating prominent Latinos and Latinas to key positions will be one part of that.

Meanwhile, progressives, who set aside their ideological differences with Biden to furiously organize and turn out big numbers of young and infrequent voters, are now demanding that their voices be reflected in his administration.

They are exerting their influence as Biden’s pick takes shape. When asked about the possibility that former Chicago Mayor Rahm Emanuel could run the Transportation Department, Rep. Alexandria Ocasio-Cortez of New York told CNN: “That’s a hard no.”

The progressive star of the 2018 freshman class said she understands why the Biden team has been cautious in some of their picks so far — because GOP control of the Senate makes the confirmation process more difficult — but she urged the Biden team to adopt a more aggressive strategy if Democrats sweep the Georgia Senate runoff.

The bar to meet both the ideological and diversity goals is high. And Biden’s concerns about plucking too many Democratic members from the House — now that his party has a more narrow majority — have complicated the conundrum as he looks to the huge governing hurdles ahead.

House majority whip and Democratic South Carolina Rep. James Clyburn, who was critical to Biden’s comeback on the shoulders of black voters during the primaries, told CNN Wednesday night he “can think of at least 10 Black folks that qualify for every single” Cabinet post.

Earlier this week, leaders from seven Black-led civil rights groups said they had asked for a meeting with Biden’s team to discuss the need for more Black nominees to his Cabinet. The groups also want to make sure the new administration is focused on ensuring appropriate representation on key minority and civil rights issues after a year when Americans took to the streets to protest systematic racism and police brutality directed toward Black Americans after the death of George Floyd.

During their tense meeting with Biden transition officials this week, the Congressional Hispanic Caucus pushed specific names for top posts. In addition to asking Biden to name Lujan Grisham as HHS secretary, they said they want to see Becerra or Democratic National Committee Chair Tom Perez as attorney general.
So far Biden has named four people of color to his Cabinet. Linda Thomas-Greenfield, a longtime diplomat who is Black, is Biden’s nominee to be UN ambassador. Biden plans to nominate Alejandro Mayorkas, a Cuban American, to be secretary of Homeland Security, making him the first Latino in that position if confirmed by the Senate. The President-elect has also nominated Neera Tanden, who is South Asian, to head the Office of Management and Budget, and Cecilia Rouse to chair the Council of Economic Advisers, which he plans to elevate to Cabinet level.
During Biden and Harris’ first joint interview this week with CNN, Harris could not name the leading progressive voice in the Cabinet thus far, but she hinted at the picks to come.

“We’re not done yet, Jake,” the vice president-elect said. “We’re not even halfway there. So, I think that we should have this conversation when we’re done.”