Analysis: Trump is getting increasingly desperate, sparking new fears for his health 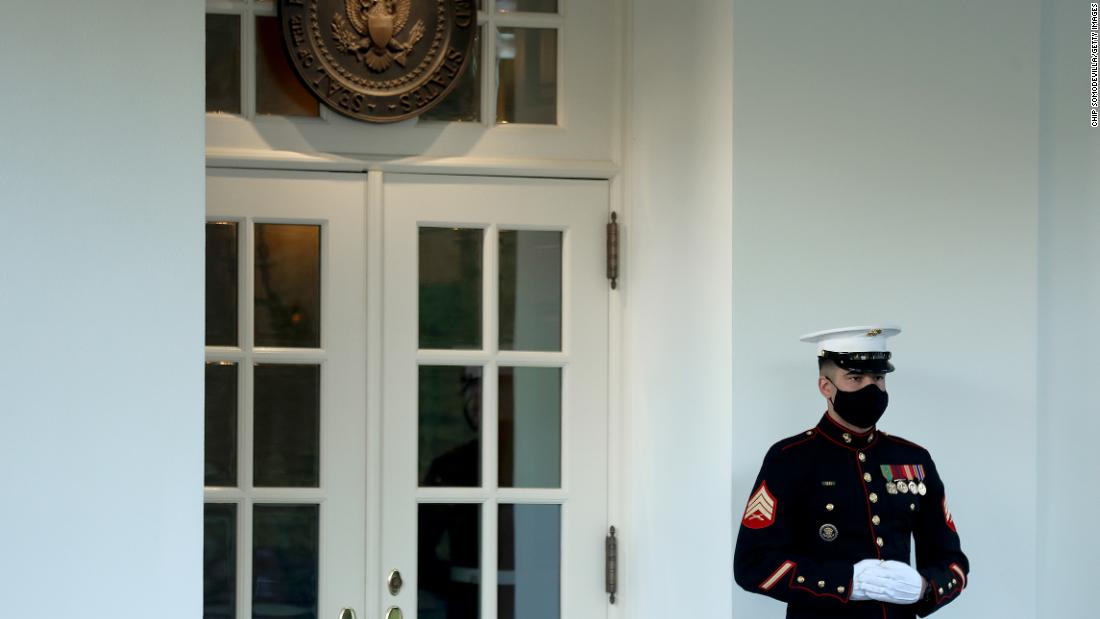 The President’s erratic conduct only emphasized an alarming leadership vacuum in a White House hollowed out by sickness as the pandemic takes an ominous turn amid fresh signs that a fragile economic rebound is slowing.

Trump’s official physician, Navy Cmdr. Dr. Sean Conley, declared that the President would be fit to return to public engagements on Saturday after completing his treatment. But questions remain over when Trump got sick, who he might have infected and if he is still contagious. And twice in an interview with Sean Hannity on Fox News on Thursday night, the President declined to say whether he has tested negative even as he said he might try to hold a rally in Florida as soon as Saturday night. While he spoke with Hannity, Trump had to pause his sentences, audibly clear his throat and cough at least twice.

During an appearance on the Rush Limbaugh radio show Friday, Trump claimed that the monoclonal antibody treatment he received from Regeneron is “more than a therapeutic, a cure.”

Trump plans to do another interview with Fox News — this time on camera with Dr. Marc Siegel, a medical analyst for the channel — that will air Friday night. It will be his first on-camera interview since contracting coronavirus.

A day of dizzying events had some of Trump’s critics suggesting that his health may be influencing his political choices.

“He is not well. We would not want any other person on the planet to do the things he’s doing this soon after knowing they’re infected,” Rick Bright, the ousted director of the government office involved in developing a coronavirus vaccine, told CNN’s Jake Tapper Thursday on “The Lead.”

Bright, the former director of the Biomedical Advanced Research & Development Authority, said that normally, someone who had undergone Covid-19 experimental therapies would be still be in a hospital bed.

“It’s very dangerous. He’s in charge of a lot of things, makes a lot of important decisions for our country and the world, actually,” said Bright, who spoke out publicly after resigning from the National Institutes of Health this week. “If he’s not in the right sound mind to make decisions rationally, then he could be very reckless for the country and the world.”

House Speaker Nancy Pelosi, meanwhile, questioned Thursday whether the President is in an “altered state” during an interview with Bloomberg TV, alluding to his sudden decision to halt stimulus negotiations. She noted that doctors have said that the steroid medication Trump was taking can affect a patient’s judgment.

“When the President did his strange tweet that said, ‘We’re walking away from the negotiations,’ it was, like, ‘What?'” Pelosi said during her weekly news conference. “We’ve all been working very hard to find our common ground.”

She’s pushing a new bill, which stands little chance of becoming law, to give Congress a clearer role in determining whether the President must be forced out of office because he’s incapable of doing his job. During a news conference about the legislation on Friday, Pelosi refused to say whether the 25th Amendment of the Constitution should be invoked in Trump’s case.

“That’s not for us to decide,” Pelosi said Friday. “This is not about President Trump. He will face the judgment of the voters, but he shows the need for us to create a process for future presidents.”

Conley’s statement on Trump’s health was especially convenient since the President spent the day Thursday locked in a test of wills with Biden’s campaign and the Commission on Presidential Debates over next Thursday’s planned second head-to-head clash. The timing will only add to concerns that Conley is being browbeaten by a President who is driven exclusively by his own political fate.

Trump first said he refused to show up to a virtual showdown, which was planned due to fears he was still infectious. Then the Trump camp demanded the last two debates each be delayed a week. Then, following Conley’s evening bulletin, Trump’s team insisted the debate could take as place as planned next week in Miami despite fears over whether the President is still contagious.

The President’s latest gambit reflects the fact that he is now at risk of losing one of the last chances to turn his campaign around — purely because he ignored social distancing measures and got sick. And he offered Biden, who would be happy to avoid risks in the closing days, an opening to accuse him of backing out.

Trump also made a complete reversal on Thursday after blowing up talks on an economic rescue package with House Democrats earlier in the week in a fresh sign of his increasingly head-spinning behavior since leaving Walter Reed National Military Medical Center.

The President is trying to turn the campaign away from his mismanagement of the pandemic by making exaggerated promises about the coming availability of an antibody treatment made by Regeneron that he is touting as a “cure” — even though it still lacks Food and Drug Administration approval. And his post-hospital warnings that Americans must not let the disease “dominate” them are complicating public health officials’ efforts to promote public safety measures like wearing masks and avoiding crowded areas.

On the same day that federal and state officials announced charges in an alleged domestic terror plot to kidnap Michigan Gov. Gretchen Whitmer, Trump accused the Democrat of “complaining” and again attacked her over her handling of the pandemic, accusing her of having “locked down” her state. Trump has consistently called for states to reopen, disregarding concerning case numbers across the country.

Earlier this week, Dr. Anthony Fauci, the nation’s top infectious disease specialist, warned that the country could see as many as 400,000 deaths from coronavirus by this winter.

“The models tell us that if we do not do the kinds of things that we’re talking about in the cold of the fall and the winter, we could have from 300,000 to 400,000 deaths,” Fauci said during a discussion with American University students Tuesday. “That would be just so tragic, if that happens.”

On Thursday, Fauci tried to clear up Trump’s falsehood on social media this week that the flu is more lethal than Covid-19.

With no medical expertise, the President is insisting he’s no longer contagious. The White House is also unconvincingly arguing that privacy concerns prevent them from sharing details of the timing of the President’s last negative Covid-19 test.

That information is important to assess whether the President recklessly went on with public events — including last week’s first presidential debate — while possibly infected. The date of the test could establish whether the White House was telling the truth when it says Trump was regularly tested — an important consideration as the presidential complex became a raging coronavirus hotspot. Knowing the date of the test is also key to evaluating the President’s claims to no longer be contagious as he agitates to get back on to the campaign trail and resume the packed rallies that risk the health of supporters and anyone they may later encounter.

Trump is also firing off irate political attacks as national polls show Biden up by double digits with voting in many states already underway.
In recent days, including in a manic Fox Business interview Thursday, Trump has wondered aloud why his foes –namely Hillary Clinton, Biden and former President Barack Obama — are not in jail. The President incredibly raised the possibility that the relatives of fallen US service members infected him at the White House, absolving his team of responsibility for their negligent measures to keep staff and visitors safe from the virus. A President who benefited from 24-hour care from top military doctors and experimental treatments not available to other Americans said on Fox Business, “What happens is, you get better … you know, you don’t really need drugs.”

Trump on Thursday also used shocking racist, sexist and McCarthyite smears to claim Democratic vice presidential nominee Kamala Harris behaved like a “monster” and a communist in her debate with Vice President Mike Pence on Wednesday.

Trump’s wild behavior is coinciding with signs that the long-feared fall spike in the pandemic is gathering speed.

Coronavirus cases are rising in 23 states, based on the average of new cases over the past seven days. The number of new cases hit nearly 50,000 alone on Thursday with another 850 deaths giving the lie to the President’s claim that people who fall ill with the pathogen simply get over it.

Yet there is no sign of a coordinated government health offensive to prepare Americans for a grim winter before vaccines become widely available.

This story has been updated with additional information.