Analysis: Trump’s not bothering to hide his political interference in vaccine push 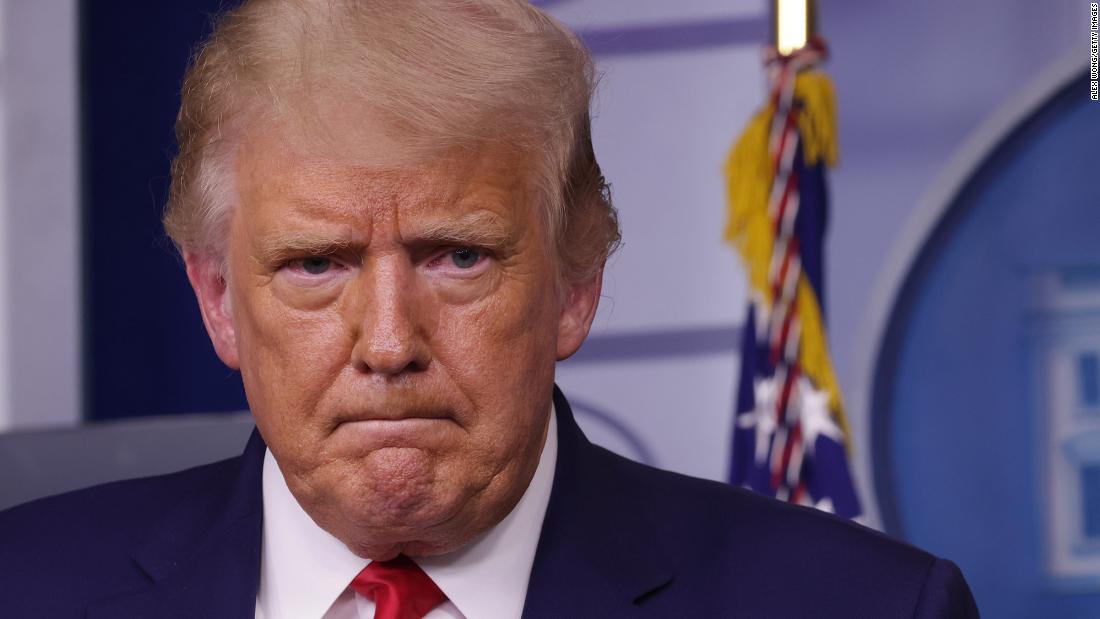 In a breathtaking spell of propagandizing, a President who has no medical expertise and has incessantly downplayed the emergency, bulldozed into the White House Briefing Room to kneecap one of the nation’s top health officials, Dr. Robert Redfield. The head of the Centers for Disease Control and Prevention had told lawmakers it could be fall 2021 before there are sufficient vaccine stocks to allow normal life to resume. He also said masks work.

“I think he got the message maybe confused,” the President said of the vaccine comments and added that Redfield “didn’t understand the question” on masks — even though the doctor’s answers had been clearly considered and carefully worded.

The President’s undercutting of Redfield came in a week in which he has repeatedly rejected the best advice of health authorities, including by holding an indoor campaign rally. He’s also challenged the science of global warming as historic fires rage in Western states. But he’s not the only top government official chafing at pandemic-induced restrictions that are designed to keep people safe from a highly infectious pathogen.
In an extraordinary statement on Wednesday, Attorney General William Barr lashed out at state governors using executive powers to impose restrictions that keep businesses closed in an effort to save lives and slow the spread of the virus.

“You know, putting a national lockdown, stay at home orders, is like house arrest. Other than slavery, which was a different kind of restraint, this is the greatest intrusion on civil liberties in American history,” Barr said during an appearance hosted by Hillsdale College, a private, conservative school in Michigan.

Trump is trying to create an impression of a return to normality before Election Day — one reason he pushed so hard for the return of Big Ten college football, a conference with teams in Midwestern swing states that announced Wednesday it will kick off its season in late October. Announcing a vaccine — whether one has completed clinical trials or not — appears to be a key part of the President’s strategy.

And his pressure on Redfield left no doubt that his short-term electoral considerations are far more important to him than a credible inoculation that Americans trust.

The President’s power play also left the position of the CDC chief untenable, even though his statements were essentially accurate.

After a telephone call from the President and Trump’s public rebuke, a CDC official told CNN that Redfield now realized that he misunderstood the questions about the vaccines.

His climbdown left his credibility shattered and means that any future statements he makes will be viewed through the prism of Trump’s bullying interference based on incessant efforts to undermine science.

Dr. Jonathan Reiner, a professor of Medicine at George Washington University, said the President’s performance on Wednesday was “stunning.”

“What Dr. Redfield said today made complete sense. It was common sense. What he said was it’s going to take a very long time to vaccinate the US,” Reiner told CNN’s Erin Burnett.

More broadly, Trump’s behavior showed how a President who disdains details and has never leveled with Americans about the virus, has been such a failure in mitigating the worst health crisis in 100 years.

By repeatedly talking about a vaccine as if it was already available, and not subject to rigorous clinical trials, Trump also cast doubt on the process of scientific evaluation that will be required before it is approved by regulators.

His comments are unlikely to build trust in a vaccine that was already being greeted with skepticism among many Americans in polls. A lack of trust in the program is the nightmare scenario since a vaccine is the best hope of eventually ending the pandemic and restoring vibrance to American life.

There’s the real country, where it will take many months for all Americans to get vaccinated once one is approved and manufactured. This country lost 1,200 citizens on Tuesday alone, will shortly mourn its 200,000th victim and has rising cases from a base that’s far higher than other rich nations.

This country is run by a President who told reporter and author Bob Woodward in February that the coronavirus was “deadly” but kept the true scale of the threat from Americans in a way that likely cost tens of thousands of lives. Other costs of that decision are astronomical. Some 30 million Americans lost jobs in a consequent economic crisis, millions of young people are still stuck doing school and college on Zoom, and the travel industry has collapsed.

Then there’s Trump land, constructed on a framework of lies and misinformation designed to trick voters in November from dwelling on his poor performance. It’s a place where masks recommended by people like Redfield don’t really work.

Where Trump’s assurances of mass vaccinations are just weeks away for millions in a nation “rounding the corner” and where everyone’s getting rich on stocks to make up for lost jobs in the crashed economy. Cramming thousands into an indoor presidential campaign rally would, in this unreal scenario, not be dangerous and the return of Big Ten football would be another sign of normality restored by a “tremendous” government effort that had saved millions of lives.

Redfield angered Trump during congressional testimony in which he was optimistic that a vaccine would soon be approved and manufactured. But that it would first need to be prioritized for first responders and those who are most at risk. Asked when there would be sufficient vaccine for the general public to get back to normal, he had a long, and somewhat dismaying timeline.

That timeline is no use to Trump since he must face voters in less than seven weeks. So he wasted little time in putting out an alternative story.

“We think we can start sometime in October,” Trump said.

“So as soon as it is announced, we’ll be able to start. That will be from mid-October on … We will be all set,” he said, promising Americans a vaccine in “at most a couple of months.”

The President added with no evidence or credibility that Covid-19 infections will be “very low” by the time Americans vote on November 3 and warned that states fearing a resurgence were staying closed just to hurt him politically.

The President, at a Tuesday night ABC News Town Hall, had made a fresh effort to discredit the wearing of masks, which are proven to block the spread of Covid-19 and are even more vital in the absence of a vaccine.

Redfield said at the Wednesday hearing, “I might even go so far as to say that this face mask is more guaranteed to protect me against Covid than when I take a Covid vaccine, because the immunogenicity may be 70%. And if I don’t get an immune response, the vaccine is not going to protect me. This face mask will.”

Trump later replied: “As far as the masks are concerned, I hope that the vaccine is going to be a lot more beneficial than the masks.”

While he said that Redfield may have “misunderstood” the question, the President’s comments suggest he was not clear on the science or on the effectiveness of vaccines and how masks work.