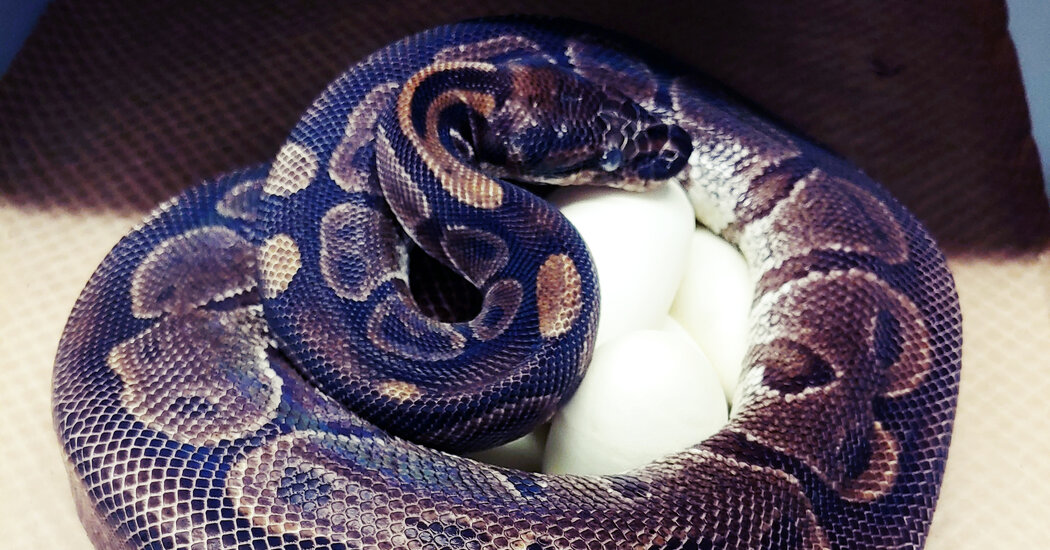 It’s been about two months since zookeepers at the St. Louis Zoo found a ball python believed to be about 62 years old coiled around a clutch of seven eggs she had laid. But the surprise has not worn off.

Not only had the snake not had contact with a male python for at least 15 years; it also had already outlived its life expectancy by more than two decades.

It’s rare but not impossible for ball pythons, one of the smallest python species, to reproduce asexually. But Mark Wanner, zoological manager of herpetology at the St. Louis Zoo, said that snakes typically live only about 30 or 40 years. It’s “kind of crazy” the python made it past 60, he said, let alone laid eggs.

“It’s not normal to see a snake live to that age,” he said. The oldest snake ever documented in a zoo was a 47-year-old ball python at the Philadelphia Zoo, Mr. Wanner said, making the St. Louis Zoo’s python now the oldest snake ever recorded. “That makes it even more incredible that she laid a clutch of eggs.”

Two of the eggs, which she laid on July 23, are being used for genetic sampling, which will help determine whether the python reproduced sexually or asexually. Snakes are also known to store sperm from an earlier encounter for delayed fertilization, though Mr. Wanner said that was unlikely in this case, as the longest snake sperm storage documented was seven years.

Of the remaining eggs, three are in an incubator at the zoo’s herpetarium, which houses its snakes, lizards, frogs and other amphibians. The two others did not survive.

Dr. Jonathan Lasos, a professor of evolutionary biology at Washington University in St. Louis who specializes in reptiles, said scientists had known for a while that there were some species of snakes and lizards in which no males exist and females reproduce asexually.

“What we didn’t realize until relatively recently is that there are some species who normally are sexual — that is, require a male and a female to reproduce — that can occasionally reproduce without any sperm,” Dr. Lasos said. Kimodo dragons, for instance, have been known to lay eggs asexually, a process called facultative parthenogenesis.

The ball python in St. Louis, which is between four and four and a half feet long and does not have a name, arrived at the zoo in 1961 through a private owner. It was estimated to be about 3 years old at the time. The zoo also has a male ball python that is about 31 years old. They are kept side by side in the zoo’s herpetarium, out of public view, but never come into contact.

The female ball python is believed to have laid eggs asexually in 2009, Mr. Wanner said. But they didn’t hatch, and no genetic testing was done to confirm this. Before that, she laid a clutch of eggs in 1990. It’s possible she may have come into contact with a male python then, as the snakes at the time were not separated from each other when the keepers cleaned their cages.

The eggs are about halfway through the incubation period and, if they survive, are expected to hatch in the next few weeks. But Mr. Wanner said they were not counting the snakes before they hatched, so to speak.

“We’re not banking on the fact that these eggs will hatch,” Mr. Wanner said, but “we’re hoping.”