As Trump’s condition makes headlines, America’s pandemic is getting worse 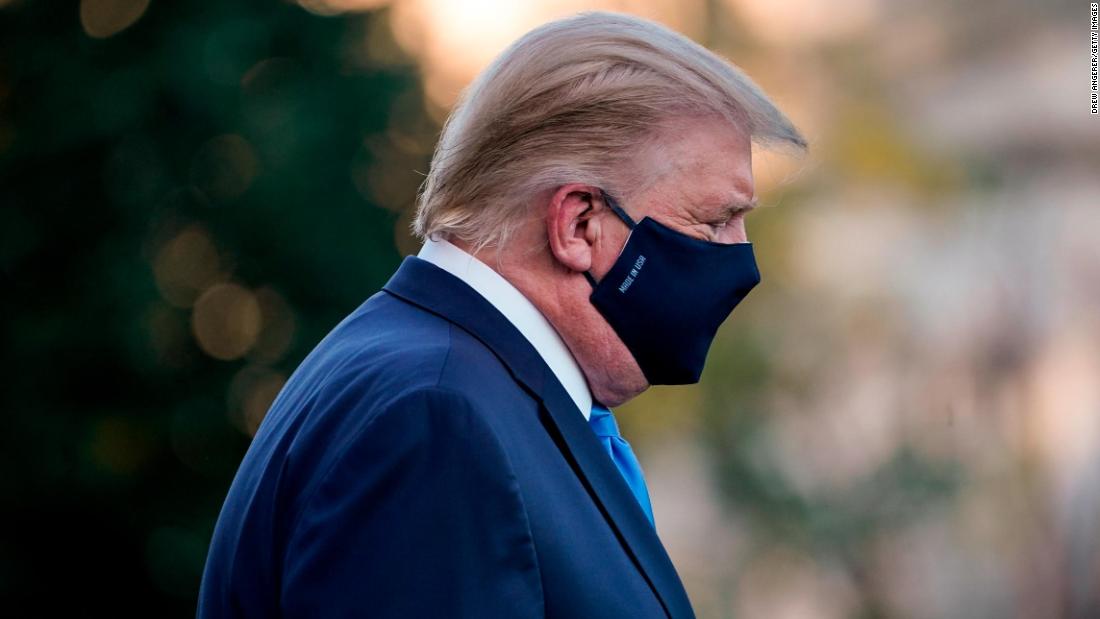 On Friday, when Trump went into the hospital, the United States recorded more than 54,000 new cases of the virus and 906 deaths. On Saturday, close to 50,000 new cases were reported along with 687 deaths. And on Sunday, there were 36,600 cases and 410 deaths according to Johns Hopkins figures collected by CNN. Tallies at the weekend are generally lower due to the difficulty of reporting.

Such numbers utterly contradict the message that Trump was giving hours before he was diagnosed with the disease himself, that the US was “turning the corner” and that “the end of the pandemic is in sight.”

The newly diagnosed patients will not have the state-of-the-art facilities, experimental treatments and dedicated hospital suites that are afforded to the President of the United States. Many patients in the pandemic have died alone in crowded hospitals cut off from loved ones.

The government’s top infectious disease specialist Dr. Anthony Fauci, who has been sidelined by the President said that the current baseline average of around 40,000 new cases a day heading into the fall and winter when people spent more time indoors was a danger sign.

“That’s no place to be when you are trying to get your arms around an epidemic,” Fauci said on CNN’s “New Day” on Monday.

Trump’s photo-op Sunday in front of supporters gathered with flags and banners outside Walter Reed National Military Medical Center risked exposing Secret Service agents riding in his armored SUV and amounted to a familiar flouting of government recommendations to stop the spread of the virus which has infected 7 million Americans. It was the latest flagrant sign of politics superseding Trump’s duties as a steward of the national well-being — with Election Day only 29 days away and voting in many states already underway.
It came amid lingering confusion about the President’s true state of health after a weekend in which the White House undertook strenuous efforts to minimize the seriousness of his case. But details about the cocktail of therapies that he is taking suggest that he is experiencing complications from the disease, even as his doctors said it was possible he could return to the White House Monday.

The showman President’s motorcade photo-op followed a misleading and politicized White House performance that displayed all the failures that have made the US anti-Covid effort one of the worst in the world.

White House physician, Navy Cmdr. Dr. Sean Conley, admitted on Sunday to not telling the full truth about Trump’s condition the day before — including about two drops in his oxygen levels — to avoid overshadowing the “upbeat” official line on the President’s health.

Trump and his aides worked hard to show he was strong and getting better before he faces off with Democratic nominee Joe Biden, whose campaign said he again tested negative on Sunday. But the contradictions and misrepresentations from his medical team means that Americans can have no confidence that the White House is giving a complete picture of what’s going on. Conflicting messages and half-truths underscored the administration’s inability to properly manage the machinery of the state and to understand the importance of sending clear information about the President’s health and the continuity of power to Americans and potential adversaries abroad.

The extraordinary attention that accompanies a presidential illness — in this case multiplied because the commander-in-chief is sick from a disease he has ignored, downplayed and said will soon go away — has obscured the alarming trajectory of the pandemic in recent days.

Including Friday, when Trump was dramatically flown to the hospital on Marine One, the US has recorded another 121,000 cases of Covid-19 and another 1,800 deaths. None of those new patients will get the dedicated round-the-clock medical care, experimental treatments, hospital suites and joy rides that are available to the President amid a national emergency in which many have died alone and patients are isolated from loved ones in crowded hospitals.

Trump says he ‘gets it’

In a video on Sunday, the President said that he had learned a lot of interesting things about Covid-19 that he planned to share with the country. It was not clear if he was finally appreciating the danger of the virus following his own infection. For months, the President has been briefed by the some of the best epidemiological experts in the world but did not treat the pandemic with the necessary seriousness. His video, posted on Twitter, did not include any admonition to Americans to take the disease more seriously after months of his flouting government health warnings and mocking those who observe them — including Biden.

“I learned it by really going to school. This is the real school. This isn’t the let’s read the book school and I get it. And I understand it,” Trump said.

The President’s subsequent jaunt outside the hospital in Bethesda, Maryland, clearly showed his education in Covid-19 does not include new respect for social distancing.

Such precautions were also ignored at a mostly mask-free event at the White House nine days ago at which Trump nominated Judge Amy Coney Barrett for the Supreme Court. At least eight people who attended the event, including the President, have been infected with Covid-19. Trump also ignored precautions at a fundraising event in New Jersey Thursday, where he went despite knowing his close aide Hope Hicks had been diagnosed with Covid-19.

His conduct raises the question of whether he endangered others while knowing he had been in close contact with someone who had tested positive for the virus. White House press secretary Kayleigh McEnany said Sunday that the President learned about his positive test when he returned from the trip. She did not say when he took the test. And given the obfuscation by the White House over the weekend, the truthfulness of any official statements at this point is in serious doubt.

Several Secret Service officers in the vehicle with Trump Sunday, who were wearing surgical masks and face shields, must presumably now quarantine after being in close contact with a patient with Covid-19, and risk becoming the latest casualties of Trump’s political ambitions.

“Why leave? What is the purpose of this?” asked Dr. James Phillips, head of disaster medicine at George Washington University and an attending physician at Walter Reed.

“Certainly looking at the risks of transmission of Covid-19, what we know is being in enclosed spaces is dangerous,” Phillips said on “The Situation Room” on CNN. “Masks or no masks. Being inside a vehicle that is hermetically sealed circulates virus inside and potentially puts people at risk.”

The White House insisted that the car ride was cleared by the President’s medical team. But there is no medical protocol that suggests it is advisable for a patient with a serious, contagious illness to leave a hospital until they have recovered or are no longer contagious.

Trump’s desire to show that he is fit, compulsion to bask in the adoration of his supporters and desire to dictate news coverage is typical. But his latest behavior also may hint at how he feels about the political impact of his confinement a month before an election in which he is trailing Biden and that threatens to turn on his mismanagement of the pandemic. Trump, who has spent the last two presidential campaigns attacking the health of his rivals, Hillary Clinton and Biden, cannot afford to look weak at this critical moment.

With time running out to turn things around, the President was jolted by new polling data over the weekend. A NBC/Wall Street Journal survey taken following Trump’s boorish performance at last week’s first presidential debate showed Biden leading 53% to 39% among registered voters nationally. An ABC News/Ipsos poll, conducted after news about the President’s coronavirus diagnosis, found that 72% of voters believe the President didn’t take the threat of contracting coronavirus sufficiently seriously. A CBS News poll, meanwhile, found Biden with a 7-point lead among likely voters in the key swing state of Pennsylvania and even with Trump in Ohio — another Midwestern battleground that went to the President in 2016. These surveys were largely completed by the time the President’s coronavirus diagnosis became known.
View Trump and Biden head-to-head polling

It remains unclear how the President’s sickness changes the final weeks of the campaign. He is unable to fly around the country and fire up his loyal base voters. The fate of the last two presidential debates — following the upcoming vice presidential clash on Wednesday between Mike Pence and California Sen. Kamala Harris — remains in doubt. And Trump’s infection now makes it almost impossible for the President to deflect from the one issue that reflects the presidency in its worst light: the pandemic.

Earlier on Sunday, Trump’s doctors revealed that the President had suffered several alarming drops in oxygen levels. Conley again delivered a briefing that raised more questions than it answered about Trump’s condition. He said that he didn’t mention drops in Trump’s oxygen levels Saturday because he didn’t want “to give any information that might steer the course of illness in another direction.”

He acknowledged that his evasive answers “came off that we were trying to hide something” but said that “wasn’t necessarily true,” adding that the President is “doing really well” and is responding to treatment.

The episodes prompted doctors to start treating Trump with the steroid drug dexamethasone, which has been shown to help patients with Covid-19. It is typically given to patients on supplemental oxygen or ventilation.

Conley also hinted at more unrevealed details when he refused to say what was revealed by X-rays or CT scans of Trump’s lungs.

“There’s some expected findings, but nothing of any major clinical concern,” he said.

All patients have expectations of privacy. But Trump shoulders a public trust given his position. It is not just crucial for voters to have some understanding of his condition. The health of the President is a crucial national security issue and commanders-in-chief have a higher duty to disclosure than regular citizens.

The approach taken by the President’s doctors suggests to many experts that the White House has been downplaying the seriousness of his condition as he fights a disease in which a patient can quickly deteriorate during the course of the infection over a period of days.

“His physicians are treating him very aggressively. And based on what we know so far, the President is ill,” said Dr. Patrice Harris, a past president of the American Medical Association, told CNN’s Wolf Blitzer.

“We know that during the course of the illness, a patient can feel just fine and suddenly take a turn for the worse. So really for the President’s own health and safety, this visit outside of the hospital was quite risky today.”