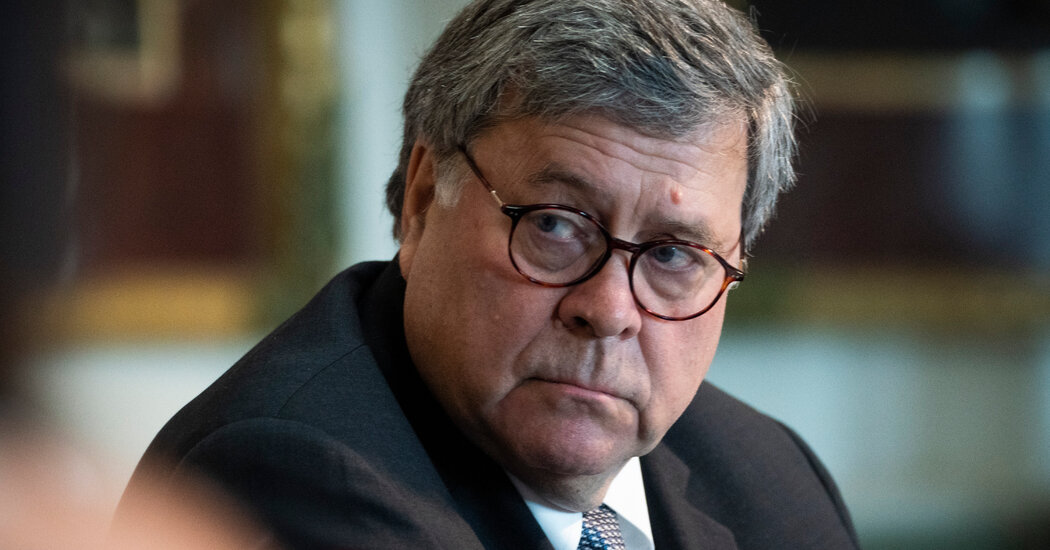 WASHINGTON — Attorney General William P. Barr issued two memos on Tuesday restricting the F.B.I.’s ability to surveil political candidates and their aides, a response to the bureau’s flawed monitoring of a former Trump campaign adviser that President Trump has long falsely promoted as evidence of a plot to spy on his campaign.

Mr. Barr said that the Justice Department and the F.B.I. must consider warning elected officials, political candidates or any of their staff members or advisers that they may be the targets of foreign governments before asking the Foreign Intelligence Surveillance Court for a warrant to secretly monitor their communications, according to a memo that he distributed to top law enforcement officials.

If no warning is given, the director of the F.B.I. must explain why in writing.

In the second memo, Mr. Barr created a new office at the F.B.I. called the Office of Internal Auditing that will be tasked with auditing the bureau’s national security investigations.

The new restrictions come in addition to limits that Mr. Barr placed earlier this year on the F.B.I.’s ability to open politically sensitive investigations that could affect the election in November. He directed the bureau to obtain written approval from the attorney general to open any investigation into a presidential or vice-presidential candidate — or their senior campaign aides or advisers — and to notify Justice Department officials before investigating Senate or House candidates or their campaigns.

Mr. Barr is the first attorney general to require that the F.B.I. consult with the Justice Department before opening potentially politically charged investigations.

The new memos directly address criticism from Mr. Trump and his supporters that former F.B.I. director James B. Comey improperly allowed the Russia investigation to go forward, and that the bureau’s work received too little oversight or scrutiny. Mr. Barr himself has said that the F.B.I. went too far in surveilling the Trump campaign, and that he believed that its investigation into the campaign’s ties to Russia was not properly predicated.

Mr. Trump’s complaints have conflated the broader Russia investigation with a narrow part of it, the wiretapping of a former adviser, Carter Page. A report by the Justice Department’s independent inspector general has debunked the notion of an anti-Trump plot among law enforcement officials, finding that the F.B.I. had sufficient reason to open the investigation and that officials acted without political bias.

But the report, issued last year by the inspector general, Michael E. Horowitz, also found that the surveillance of Mr. Page was marked by serious errors. Mr. Horowitz found that an F.B.I. lawyer, Kevin Clinesmith, added false information to an email as the bureau prepared to ask a court for renewed permission to monitor Mr. Page’s communications. Mr. Clinesmith pleaded guilty last month to falsifying the document.

In response to the report, the F.B.I. director, Christopher A. Wray, ordered 40 “corrective actions,” including many to the application process for so-called FISA warrants. The inspector general’s report, he said in a statement on Tuesday, “describes conduct that was unacceptable.”

“The additional reforms announced today, which we worked on closely with the attorney general’s office, will build on the F.B.I.’s efforts to bolster its compliance program,” Mr. Wray said.

The F.B.I. is looking for an outside consultant to help it improve its existing auditing process. The new office will routinely audit the F.B.I.’s national security work to help ensure that its applications for wiretaps are accurate and complete, that the bureau is following the new policies and that its overhaul efforts are working.

A recent inspector general review found that most FISA applications are accurate.

Mr. Trump’s allies have also said that the F.B.I. should have given the Trump campaign a so-called defensive briefing, sharing that Russia was trying to infiltrate its ranks and influence people close to the candidate — a perceived oversight that Mr. Barr’s memos also addressed.