Barr to Testify on Protest Response, Mueller Inquiry and Other Issues 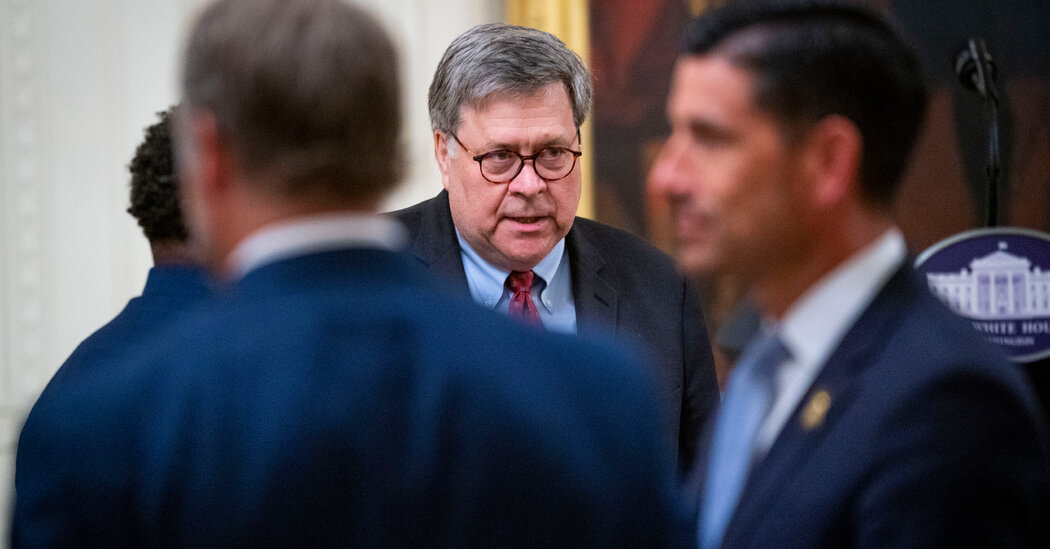 WASHINGTON — Attorney General William P. Barr will travel to Capitol Hill on Tuesday for his first congressional testimony in more than a year, and lawmakers are prepared to press for explanations on the federal response to nationwide protests of police killings of Black Americans and the handling of criminal cases involving President Trump’s allies.

The hearing before the House Judiciary Committee is certain to be tense and likely one of the final congressional oversight showdowns of Mr. Trump’s first term. Mr. Barr plans to come out swinging. In a prepared opening statement released Monday night, he aggressively defended the federal response to the protests and accused Democrats of demonizing him because he believed the Trump-Russia investigation was misguided.

The socially distant hearing begins at 10 a.m. Here’s what to expect.

Lawmakers will focus on the protests — to different ends.

Democrats are prepared to accuse Mr. Barr, the nation’s top law enforcement officer, of making overtly political decisions to help Mr. Trump. But their most pressing examples will be the federal response to nationwide protests after the killing of George Floyd in May while he was in police custody in Minneapolis.

The attorney general appears to have played a primary role in using federal agents to violently clear protesters from Lafayette Square near the White House last month before a photo opportunity for Mr. Trump in front of a church. Though the White House initially said Mr. Barr had ordered the clearance, he later said he had not given a “tactical” order. Either way, Democrats were livid over his presence and have come to see Mr. Barr as a key impediment to overhauls of policing that enjoy broad public support.

More recently, he has become a face of the Trump administration’s pledge to surge federal agents into Democratic-led cities like Portland, Ore.; Chicago; and Kansas City, Mo., where, the White House says, protests have descended into violence, including against federal buildings. The federal intervention — the details of which remain hazy — is quickly becoming another flash point in the monthslong cultural reckoning over systemic racism, and it appears to be a key campaign strategy by Mr. Trump who is trying to stoke a sense that Democrats are leading the country into chaos.

Republicans plan to use much of their allotted time to buck up Mr. Barr, whom they see as holding the line against protesters they accuse of targeting the police and federal property while using Mr. Floyd’s name as cover.

But the attorney general seems unlikely to need much help. In his prepared remarks, he warned that “violent rioters and anarchists have hijacked legitimate protests to wreak senseless havoc and destruction” in places like Portland, Ore.

“We should all be able to agree that there is no place in this country for armed mobs that seek to establish autonomous zones beyond government control, or tear down statues and monuments that law-abiding communities chose to erect, or to destroy the property and livelihoods of innocent business owners,” he planned to say.

His comments were the latest attempt by federal officials to draw more attention to vandals’ nightly bids to damage federal buildings in Portland, accusing local police of doing little to stop them. City officials have accused federal agents of being heavy-handed and said their presence reinvigorated tensions that had been subsiding.

Mr. Barr was also prepared to testify that the aftermath of Mr. Floyd’s death had led to “demonizing police” and accusations of systemic racism in law enforcement. That view is an “oversimplification,” he will say, of a more complex mix of problems that prompt mistrust in the police by people of color.

House Democrats have sought to press Mr. Barr on his handling of the Russia report by the special counsel, Robert S. Mueller III, for more than a year. They will finally have their chance.

A federal judge has said that in summarizing the report himself weeks before releasing it, Mr. Barr put forward a “distorted” and “misleading” account that torqued public understanding of it in a way that favored Mr. Trump. Democrats felt at the time that those distortions brazenly helped protect Mr. Trump politically from possible impeachment — an accusation Mr. Barr denies.

Since then, the attorney general has directed a criminal prosecutor to scrutinize the F.B.I. inquiry into the Trump campaign’s ties to Russia and stepped in to reverse key prosecutorial decisions stemming from the investigation.

Specifically, Democrats will ask about his intervention to recommend a shorter prison sentence for Mr. Trump’s longtime friend Roger J. Stone Jr. on seven felony crimes — a sentence Mr. Trump has since commuted — and to drop charges against the former national security adviser Michael T. Flynn even though he had pleaded guilty.

The Judiciary Committee heard testimony from a prosecutor on the Stone case last month accusing department leaders of changing a sentencing recommendation for Mr. Stone for “political reasons.” A second whistle-blower at that session also accused Mr. Barr of ordering antitrust investigations to harass marijuana sellers in states that have legalized the substance and to scrutinize California’s emissions deal with automakers after Mr. Trump attacked it.

Mr. Barr is prepared to testify that he acted “without partisan considerations” and that Democrats’ hatred of Mr. Trump has blinded them to abuses by law enforcement and intelligence officials. (He did not address the cases specifically in his prepared opening statement.)

“Ever since I made it clear that I was going to do everything I could to get to the bottom of the grave abuses involved in the bogus ‘Russiagate’ scandal, many of the Democrats on this committee have attempted to discredit me by conjuring up a narrative that I am simply the president’s factotum who disposes of criminal cases according to his instructions,” Mr. Barr planned to say.

He has long been a critic of law enforcement and intelligence officials’ attempts to understand Russia’s efforts to tilt the 2016 election in Mr. Trump’s favor and whether any Trump associates conspired.

Mr. Mueller’s report said that Russia favored Mr. Trump and that his campaign welcomed the interference and expected to benefit from it, but that investigators found insufficient evidence to bring criminal conspiracy charges.

Mr. Barr will also say that Mr. Trump has never tried to “interfere” in his decisions, giving him “complete freedom” to do what he thinks is right.

Republicans want details on the investigation examining the Russia inquiry.

Republicans have cheered on Mr. Barr as he took steps to discredit the Russia investigation. On Tuesday, they will be fishing for more clues about where he is going.

Mr. Barr appointed a criminal prosecutor, John H. Durham, to lead the scrutiny and has repeatedly hinted at possible indictments and could provide new details. He has suggested that he does not believe longstanding department policy against taking actions that could affect elections should apply to Mr. Durham’s work this fall and that he worries federal agents unfairly and dangerously targeted Mr. Trump and his campaign.

In the meantime, Republican lawmakers are likely to ask for Mr. Barr’s thoughts on a raft of recently declassified case files that they argue show F.B.I. agents were relying on shoddy foreign information to undertake key investigative actions into Mr. Trump’s associates.

Mr. Mueller’s investigators determined that Mr. Trump’s campaign welcomed Moscow’s help in 2016 but found insufficient evidence to charge any campaign officials or Trump associates with conspiring with the interference by a hostile foreign power.

Mr. Barr may also be questioned about his warning of widespread voter fraud.

With states preparing for record numbers of voters to cast ballots this fall by mail because of the coronavirus pandemic, Mr. Barr has provided key backup to Mr. Trump’s claims of rampant fraud. Democrats fear their comments are intended to or will at least have the effect of suppressing voter turnout or limiting access to the ballot box.

In an interview with Fox News last month, Mr. Barr said widespread vote by mail “opens the floodgates to fraud,” including by a foreign power.

“Right now, a foreign country could print up tens of thousands of counterfeit ballots, and be very hard for us to detect which was the right and which was the wrong ballot,” Mr. Barr said. He made similar comments to The New York Times.

“In terms of foreign influence, there are a number of foreign countries that could easily make counterfeit ballots, put names on them, send them in,” he said.

Like Mr. Trump, the attorney general has not presented evidence to back up his claims, but has mostly spoken in hypotheticals about the insecurity of mailboxes.

Experts say that tampering with ballots is nearly impossible because of how they are printed and tracked. Many states have been conducting elections by mail for years without any major security problems or widespread fraud.