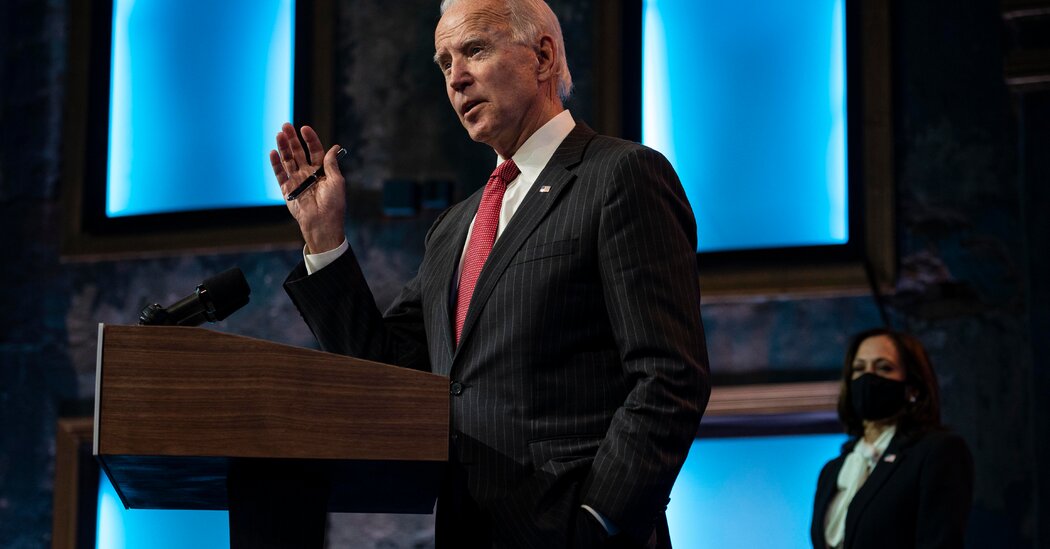 WASHINGTON — In his sharpest condemnation yet of President Trump’s efforts to undermine the legitimacy of the 2020 election, President-elect Joseph R. Biden Jr. said on Thursday that Mr. Trump’s refusal to authorize an orderly transition ensured that he would be remembered as “one of the most irresponsible presidents in American history.”

“It’s hard to fathom how this man thinks,” Mr. Biden said in response to a question about the president’s extraordinary interventions in Michigan’s election certification process. “I’m confident he knows he hasn’t won, and is not going to win, and we’re going to be sworn in on Jan. 20.”

But Mr. Biden warned that as a result of Mr. Trump’s actions, “incredibly damaging messages are being sent to the rest of the world about how democracy functions.”

“It sends a horrible message about who we are as a country,” he added.

Mr. Biden spoke in Wilmington, Del., shortly after a virtual meeting earlier in the day with five Democratic and five Republican governors. Citing what he called the “tragic milestone” of more than 250,000 deaths from Covid-19, Mr. Biden vowed quick action after he takes office but promised not to impose a national shutdown. And he lashed out at the president for blocking “access to all the information we need” about vaccinations and other virus data.

Asked directly about Mr. Trump’s motives in contesting the election and standing in the way of a smooth transfer of power, Mr. Biden appeared to struggle to contain his frustration. In a striking contrast to four years of a verbally unrestrained occupant in the Oval Office, Mr. Biden paused, took a deep breath and said, “Let me choose my words.”

The words he finally settled on: “Totally irresponsible.”

In his prepared remarks, Mr. Biden remained focused on the urgent need to beat back the virus, part of a strategy in which the president-elect has tried to present a calm, but firm, alternative to Mr. Trump’s, focused on fighting the pandemic in contrast to the president’s erratic and unpredictable behavior.

Less than an hour later, Ron Klain, who Mr. Biden announced last week would be his White House chief of staff, made the comparison explicit.

“While the president of the United States, in the middle of a crisis, was busy calling local election officials trying to get them to subvert the election in Michigan, Joe Biden did a call with frontline health care workers to hear their stories,” Mr. Klain said in an interview on CNN.

He was referring to a thank-you that Mr. Trump sent to a Republican on the canvassing board of Wayne County, Mich., who initially refused to certify election results showing a Biden victory in the heavily Democratic area as well as to an invitation to the White House that the president extended to state lawmakers in an apparent effort to persuade them to defy the will of their state’s voters and choose electors who would back Mr. Trump.

Mr. Klain said Americans had “long learned to expect the worst” from Mr. Trump, and he accused the president of exceeding that expectation, saying that “the president is thrashing around with these P.R. stunts, these ridiculous allegations that are baseless.”

In his own remarks, however, Mr. Biden was cautious about what additional concrete steps, if any, he might take to begin a transition against Mr. Trump’s will. He did not rule out the possibility of legal action that might require the head of the General Services Administration, Emily W. Murphy, to sign paperwork authorizing a transition process — one that would provide Mr. Biden’s team with access to federal resources, data and personnel.

But he played down the idea, saying that lawsuits would “take a lot of time.”

“At the moment,” he said, “the strategy’s not changing.”

Mr. Biden suggested that his better option was to persuade Republicans to acknowledge his victory and Mr. Trump to accept the inevitable and concede his defeat.

“My judgment is that we’ll get further along by actually working with our Republican colleagues now,” Mr. Biden said.

As he has several times in recent days, Mr. Biden warned that the delayed transition process makes it harder for him to plan an effective response to the coronavirus after his inauguration on Jan. 20 and could slow the nationwide distribution of vaccines.

“We can’t wait,” he said, calling the coming vaccine distribution “one of the greatest operational challenges we will have faced as a nation.”

“There is no excuse not to share the data and let us begin to plan,” Mr. Biden said.

Asked by a reporter who he would nominate to be his Treasury secretary, Mr. Biden said, “You’ll soon hear my choice for Treasury.” He added that the announcement would come “either just before or just after Thanksgiving.”

Earlier, Mr. Biden and Vice President-elect Kamala Harris, who joined him in Wilmington, met virtually with the governors from both parties. The group included John Carney of Delaware, Andrew M. Cuomo of New York, Michelle Lujan Grisham of New Mexico, Jared Polis of Colorado and Gretchen Whitmer of Michigan, all Democrats, as well as Charlie Baker of Massachusetts, Gary R. Herbert of Utah, Larry Hogan of Maryland, Asa Hutchinson of Arkansas and Kay Ivey of Alabama, all Republicans.

“You need help,” Mr. Biden told the governors as reporters were briefly allowed to listen. “I want you to know I will be your partner in the White House.”

Stopping the pandemic, Mr. Biden said later in his remarks, will require cooperation with governors and local officials.

But he said the rapid spread of the virus across the country would require coordinated action, including a nationwide agreement to mandate that people wear masks and a decision by the federal government to help localities pay for the significant costs of confronting the disease, something that has so far left the Congress deeply divided and unable to cooperate.

Appearing on CNN later in the day, Mr. Hogan urged Congress to pass a stimulus bill before a new session convenes in January, and he echoed Mr. Biden’s frustration with the transition delay.

“We do have concerns that they haven’t been involved with the transition, they’re not getting up to speed,” said Mr. Hogan, a prominent Republican critic of Mr. Trump.

“We can’t afford to be delaying,” he added.

Mr. Hogan said he believed some of the Republicans endorsing or declining to rebut Mr. Trump’s election conspiracy theories were “afraid of the president.”

Even as Mr. Biden spoke, Vice President Mike Pence defended the Trump administration’s response to the coronavirus during the first appearance in months from the White House’s coronavirus task force.

“America has never been more prepared to combat this virus than we are today,” Mr. Pence said, adding that the president directed him to hold the briefing.

“President Trump wanted me to make it clear that our task force, this administration and our president does not support another lockdown,” the vice president said.

At the same briefing, Dr. Anthony S. Fauci, the government’s top infectious disease expert, in his first public appearance at the White House in months, sought to reassure a nervous public about the safety of two promising coronavirus vaccine candidates, insisting that neither scientific integrity nor safety was compromised.

“We need to put to rest any concept that this was rushed in an inappropriate way,” Dr. Fauci said. “This is really solid.”

Mr. Biden said he was encouraged by his discussion with the governors and pledged to work with them as soon as he takes office to make sure the country is unified in fighting the virus.

“There was a real desire for a real partnership with the federal government,” Mr. Biden said. “The governors made clear that beating Covid-19 is going to require all of us working together, as one country.”