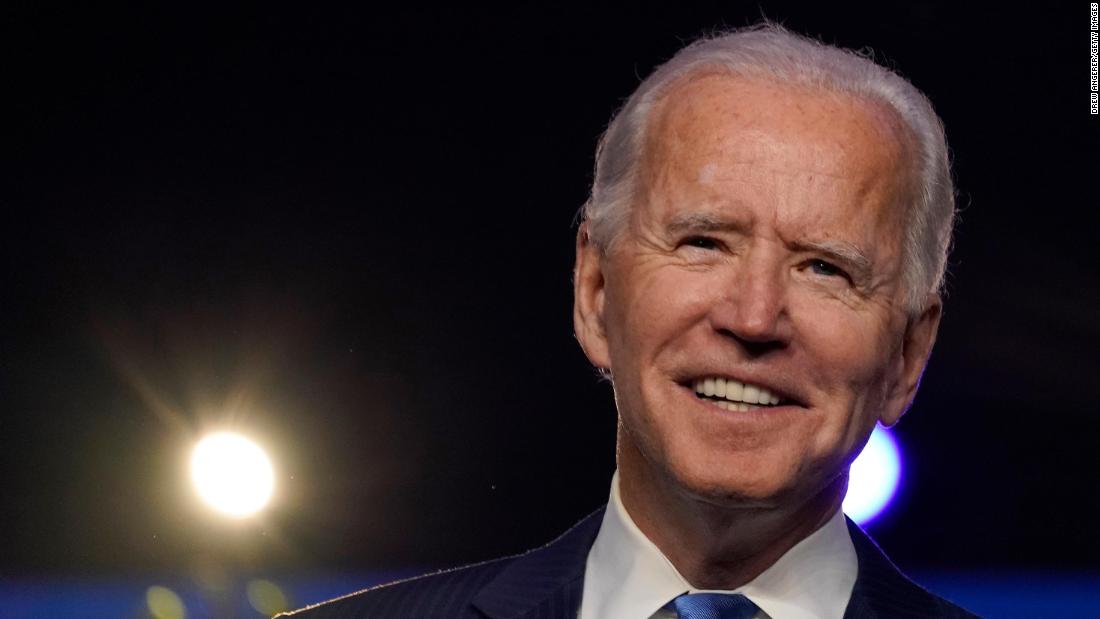 “In the face of unprecedented obstacles, a record number of Americans voted. Proving once again, that democracy beats deep in the heart of America,” Biden said. “With the campaign over, it’s time to put the anger and the harsh rhetoric behind us and come together as a nation.”

“We are the United States of America. And there’s nothing we can’t do, if we do it together.”

Biden, who turns 78 at the end of this month, will become the oldest president when he is inaugurated in January in the midst of the worst public health emergency in 100 years, the deepest economic slump since the 1930s and a national reckoning on racism and police brutality that is still unresolved.

Supporters poured into the streets across the country in a moment of catharsis to celebrate the President-elect’s victory, that also means that California Sen. Kamala Harris, his running mate, will make history as the first woman, the first Black person and the first person of Southeast Asian descent to become vice president.

His election will end Trump’s tumultuous hold on Washington and condemn the Republican, who has had a lifelong obsession with winning, to the ranks of chief executives who lost after a single term.

In a cinematic twist, it was Biden’s boyhood state of Pennsylvania that put him over the 270 electoral vote threshold and delivered the White House. Trump had held a wide lead over Biden on the night of the election, but as election officials counted hundreds of thousands of mail-in ballots, the race shifted dramatically in Biden’s favor, infuriating Trump and his allies, who knew the President’s path to the White House was over without the commonwealth.

That the Keystone State was the last hurdle in Biden’s path to the White House was a fitting end to a hard-fought race given that the former vice president has long cultivated his image as “middle-class Joe” from Scranton. In a visit that now seems almost prophetic, he had made a final trip to his childhood home in the city on Election Day after spending much of the campaign promising to prioritize the livelihoods of the many working-class voters whom Hillary Clinton lost to Trump in her 2016 bid.

On one of the living room walls in the house where he grew up, he wrote: “From this House to the White House with the Grace of God,” signing his name and the date,”11.3.2020.”

In the final days of the race, Biden’s team redoubled their efforts to rebuild the Democrats’ “blue wall” — and that gambit paid off with Biden winning Pennsylvania, Michigan and Wisconsin, according to CNN projections, while holding Minnesota, which the President made a priority in his reelection push.

As he watched his hopes of reelection being strangled with each tranche of votes in Pennsylvania, Trump lashed out on Twitter during the tense vote count, attempting to undermine democratic institutions with demands like “STOP THE COUNT.”

The President falsely claimed the election was being stolen from him as many mail-in ballots, which were often counted after Election Day votes, landed in the column of his opponent.

Facing a deeply polarized country, Biden had tried to project comity and patience, and his desire to unite America.

“There will not be blue states and red states when we win. Just the United States of America,” Biden said Wednesday afternoon. “We are not enemies. What brings us together as Americans is so much stronger than anything that can tear us apart.”

Biden again asked for patience from his supporters on Thursday afternoon. “Stay calm. The process is working,” he said in Wilmington, Delaware. “Each ballot must be counted. … Democracy is sometimes messy. It sometimes requires a little patience, as well. But that patience has been rewarded now for more than 240 years with a system of governance that is the envy of the world.”

Part of Trump’s frustration stemmed from the fact that his campaign’s finely tuned ground game did in fact succeed in turning out many more of the so-called “hidden Trump voters” than expected, making the race a much tighter contest than pre-election polls suggested.

Ultimately, Biden carved out his route to 270 Electoral College votes by holding most of the states that Clinton won and adding Pennsylvania, Michigan and Wisconsin to his column. Ballots are still being counted in the key states of Nevada and Arizona.

Trump continued to cast aspersions on the electoral process — wrongly suggesting that there was something nefarious about the fact that the vote count in key states continued well after Tuesday night, as is customary in US elections. Meanwhile, his team mounted a series of lawsuits in several states, including Pennsylvania, looking to stop vote counting in some areas while challenging how closely observers can monitor officials counting the votes in others. The Trump campaign also said it would demand a recount in Wisconsin, where Biden led Trump by some 20,000 votes, even though historically a margin of that magnitude is unlikely to be reversed.

The victory of Joseph Robinette Biden Jr., who forged a 50-year career as senator and vice president from his Delaware homestead, is a full circle moment that comes more than 30 years after his first presidential campaign.

Biden’s life of tragedy — he buried his first wife and his first daughter, and his adult son Beau, who died in 2015, survived two brain aneurysms and stayed in politics after two failed White House campaigns — shaped his image as a man of resilience and decency. Those qualities made him America’s choice as a president who could shoulder the grief of a nation traumatized by the loss of more than 234,000 citizens to Covid-19, with millions unemployed in an environment of intense economic uncertainty.

Biden’s victory means that Trump’s rage-filled presidency — powered by his nationalism, toxic racial appeals, incessant lying and assault on democratic institutions — may come to be seen as a historical aberration rather than a new normal.

But Biden faces a huge task in uniting the country and addressing America’s disillusionment with establishment figures like him, which led to the current President’s political rise as an outsider who was elected on a wave of populism in 2016.

Biden is pledging to restore America’s “soul,” which he says was compromised by Trump’s divisive approach, and to purge the President’s “America First” foreign policy and rebuild Washington’s traditional position of global leadership.

But Democrats dreaming of a “New Deal” style era of reform on health care, the economy, climate change, race and possibly even expanding the Supreme Court will see their ambitions tempered by their lack of gains in the balance of power in Congress and the need for the Biden administration to halt a pandemic that is getting worse. Health experts at the University of Washington’s Institute for Health Metrics and Evaluation project say the virus could claim nearly 400,000 Americans lives by the time Biden is sworn in.

A future dominated by a pandemic and uncertainty

A country weary of nearly a year of lockdowns, separation from family and friends, and economic deprivation will need to be mobilized to adopt aggressive new steps to conquer a pandemic that Biden argued the Trump administration essentially gave up fighting.

The much-anticipated arrival of a vaccine that experts hope would be widely available in 2021 is a potential ray of hope, though it will be many months before life is back to normal. That means that Biden’s first year — the time when a new President’s power is maximized — will be dominated by the coronavirus.

And it remains uncertain whether Biden’s pragmatic instincts, his lonely belief that a new era of cooperation is possible with Republicans, and his desire to preserve a winning coalition that included moderates and Never Trumpers could lead to early clashes with Democratic progressives.

Biden’s task is complicated by inheriting a political climate intensely polarized by Trump’s presidency. After months of predictions by the President that the election will be “rigged,” Trump’s supporters see the Democrat’s victory as illegitimate, confounding his hopes of forging national unity.

A battle for the future ideological direction of the Republican Party between the President’s partisans and more traditional conservatives in the post-Trump era could sow further discord in Washington. And the chances that Trump will simply fade into history seem minimal given the real estate mogul’s history of controlling the news cycle as he weaponizes his Twitter feed to settle political grievances.

Biden’s international aspirations also face challenges. The world has moved on during four years of American distraction. China has accelerated its power plays in Asia and around the world, and a new Cold War looms. US allies wonder whether America can be trusted anymore and how long the internationalist restoration in Washington will last. Confrontations with North Korea, Iran and Russia are even more acute than when President Barack Obama left office.