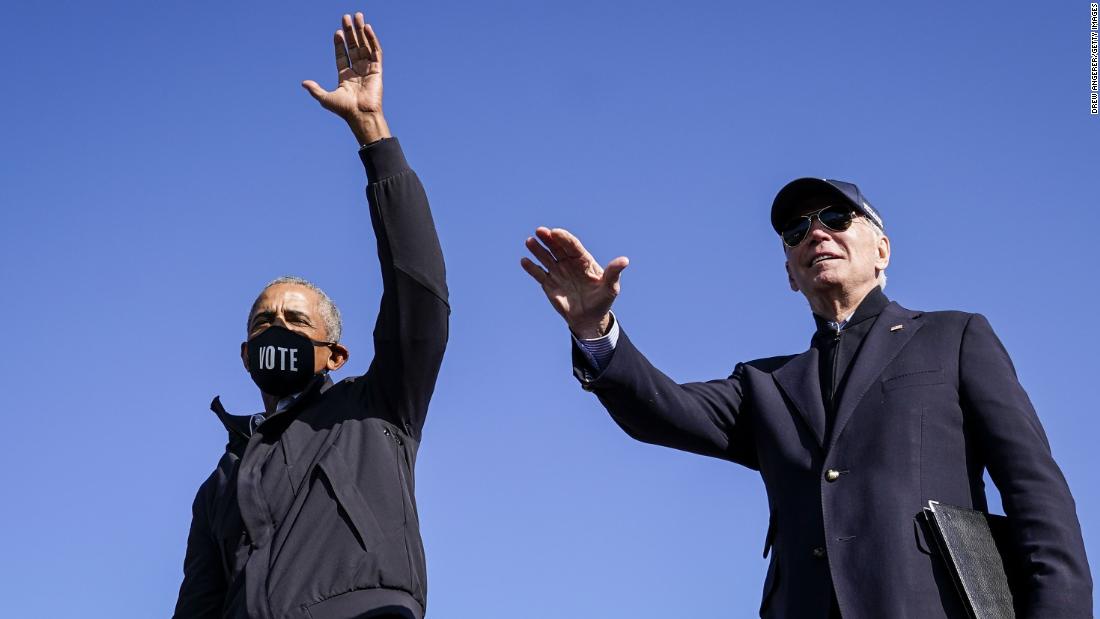 The Democratic presidential nominee is spending Sunday campaigning in Philadelphia. He’ll speak early in the afternoon at a “Souls to the Polls” event aimed at getting Black church attendees to vote, and then hold a drive-in rally in the evening.

It comes after he spent Saturday in Michigan campaigning with former President Barack Obama, and Friday in Wisconsin, Minnesota and Iowa — visiting a region that Hillary Clinton’s campaign was accused of ignoring, only to watch several states once considered reliably Democratic slip away in Election Night stunners four year ago.

Biden’s decision to focus his final days of campaigning on northern battlegrounds showed that — while polls show him with narrow leads in other battleground states across the Sun Belt — his campaign believes winning back enough White, working-class voters to rebuild the “blue wall” of Michigan, Pennsylvania and Wisconsin represents his clearest path to 270 electoral votes.

CNN polls released Saturday showed Biden with a 52% to 44% lead in Wisconsin, one of the nation’s leading hot spots in the coronavirus pandemic as cases spike there, and a 53% to 41% advantage in Michigan.
Build your own road to 270 electoral votes with CNN’s interactive map

Now, Biden is fully shifting his focus to what polls have shown might be the most competitive of those states, and the tipping point that pushes one candidate to victory: Pennsylvania’s 20 electoral votes.

Beyond the state’s competitiveness, it also represents for the campaigns the best chance to shift votes late. Other swing states — particularly in the Sun Belt — cast huge shares of their ballots early and by mail. In Pennsylvania, the majority of votes are expected to be cast on Election Day itself.

“We win Pennsylvania, we win it all — you know that, right?” Trump said Saturday night in Butler.

He complained about states counting mail-in ballots after Election Day, and falsely claimed that the United States is “rounding the turn” against the coronavirus pandemic.

He praised his administration’s response to the pandemic, claiming a vaccine would “end the pandemic once and for all,” and that the country is “now just weeks away from the mass distributing of a safe vaccine.” Throughout the summer, he often predicted a vaccine would be available by Election Day.

A day earlier, Trump had made the baseless claim that American doctors are profiting from coronavirus deaths. Obama and Biden lambasted Trump’s handling of the pandemic on the campaign trail Saturday.

“He’s jealous of Covid’s media coverage and now he’s accusing doctors of profiting off this pandemic — think about that,” Obama said. “He cannot fathom, he does not understand the notion that somebody would risk their life to save others without trying to make a buck.”

Trump has also made a big bet on fracking for natural gas, which is a major economic driver in Western Pennsylvania but is opposed by many concerned with climate change. He is alleging that Biden would ban fracking; Biden had previously indicated he was open to it, but has more recently said he would not ban fracking. On Saturday, Trump issued a memo instructing his administration to “assess the potential consequences of fracking bans.”

“Biden’s plan to Abolish American Energy is an economic DEATH SENTENCE for Pennsylvania. A vote for Biden is a vote to BAN FRACKING & send PA into a nightmare of poverty & depression. Gas prices would explode & family incomes would plummet—I will always defend & promote PA energy!” Trump tweeted Sunday.

Rebuilding that “blue wall” isn’t Biden’s only path to 270 electoral votes. His campaign has also targeted a number of Sun Belt states that are must-wins for Trump: Florida and North Carolina are crucial battlegrounds, and Biden’s campaign is bullish on Georgia — where a diversifying electorate and a suburban swing in Democrats’ favor has reshaped the political landscape of what was once a reliably Republican state.

Biden’s campaign has also focused on Arizona, a state that — like Georgia and North Carolina — is also key to determining which party controls the Senate. And amid an unprecedented surge in early votes in Texas that has already resulted in more votes being cast there than in the 2016 election, Biden’s running mate, California Sen. Kamala Harris, spent Friday campaigning there.

Those states, though, aren’t must-wins: Biden’s big bet has always been that he could rebuild the blue wall. And if he falls short everywhere else, those blue wall states could still leave him a path to victory — as long as he holds onto two additional Democratic-leaning states where Trump has campaigned, Minnesota and Nevada.

He has deep connections to the region: Biden was born in Scranton, Pennsylvania, and for decades has lived just southwest of Philadelphia. The Obama administration’s 2009 bailout of the automotive industry was vital to the economies of Michigan and other Rust Belt states.

Biden’s ability to recapture Michigan, Pennsylvania and Wisconsin after Trump’s wins in those states in 2016 has always been at the core of his candidacy.

Those states, as well as Minnesota, a Democratic state that Trump has also targeted, have drifted in Republicans’ favor in recent elections as the GOP’s margins of victory have grown among rural and White voters. But Biden represents his party’s best chance to stop that trend. The coalition of voters he has sought to assemble to build a path to victory relies more on strong performances with White voters, independents and older voters than Obama and Clinton have in previous elections. He also stands to benefit from the suburban shift toward Democrats during Trump’s presidency.

Still, Biden’s campaign has shown that — while the former vice president’s focus is the “blue wall” — it is also competing hard in the Sun Belt. Harris campaigned in Texas on Friday and spent Saturday in Florida. She’ll be in Georgia and North Carolina on Sunday. Obama is being dispatched to Georgia and Florida on Monday, the final day of campaigning.