Biden Knows Washington Has Changed. He’s Less Sure He Has To. 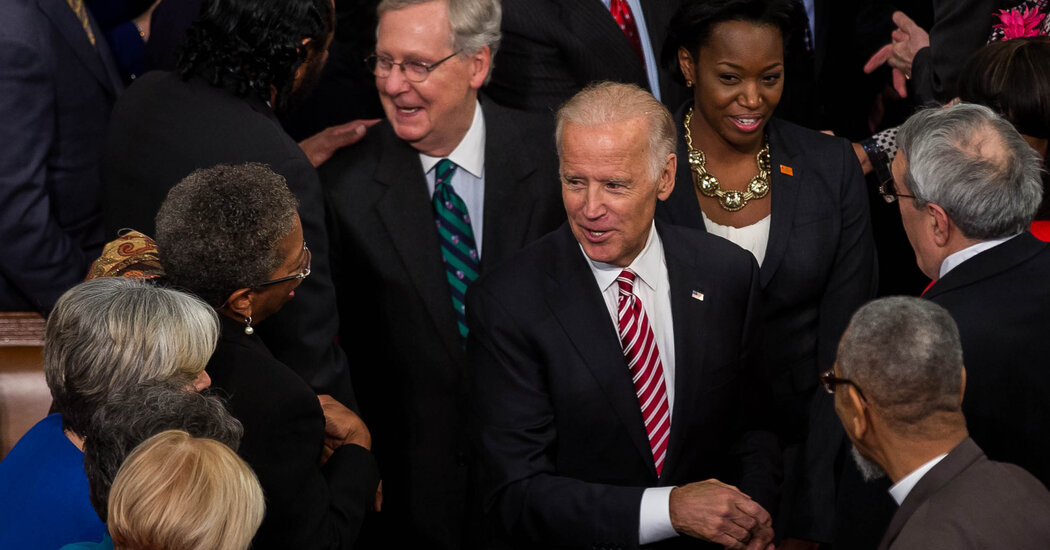 Joseph R. Biden Jr., distinguished backslapper and inveterate deal-seeker, has spent most of his last 50 years in the middle of things.

As a presidential candidate, he urged moderation, suggesting that the country was not as progressive as some Democratic rivals insisted.

As vice president, he was the White House emissary dispatched to negotiate with unbending Republicans in Congress, at times with too little success and too willing capitulation in the eyes of liberals.

And across his decades in the Senate, Mr. Biden tended to find his way to the center of the fray — civil rights debates, judicial hearings, the crime bill, the Iraq war — priding himself on a reputation as the lawmaker most likely to befriend Ted Kennedy and Strom Thurmond in the same lifetime.

“For the man who will see, time heals,” Mr. Biden said in a generous 2003 eulogy for Mr. Thurmond, the avowed South Carolina segregationist whom he saluted for moving to “the good side” eventually. “Time changes.”

Now, as Mr. Biden prepares to assume the presidency in a divided Washington, he will confront the ultimate test of how much times have changed, and how much he has. While Democrats have retained hope that two runoff elections in Georgia might deliver them narrow control of the Senate after all, Biden allies are bracing for the prospect that Republicans will rule the chamber.

Even an optimistic scenario for him — a 50-50 Senate with Kamala Harris supplying tiebreaking votes as vice president — would place a Biden administration at the mercy of the most centrist Democrats, like Senator Joe Manchin III of West Virginia.

As a matter of policymaking, this is plainly a significant disappointment for the Biden team, instantly complicating the legislative path for priorities like health care and climate action and raising the chances that even cabinet confirmations will require serious Republican cooperation.

At the same time, it would be difficult to conjure a more consequential proving ground for the arguments Mr. Biden has made throughout his career: that compromise is good, that modest progress is still progress and that he is the man to help make it happen.

“The vast majority of the 150 million Americans who voted — they want to get the vitriol out of our politics,” Mr. Biden said in a speech Friday night. “We’re certainly not going to agree on a lot of issues, but at least we can agree to be civil with one another. We have to put the anger and the demonization behind us.”

Friends say the election results seem likely to reinforce Mr. Biden’s belief in his own style, if only because he sees no other course available. He recognizes that the world has changed, they suggest; he is just less convinced that his worldview should.

The realities of a Republican-led Senate might even lend Mr. Biden some cover with the left, delaying or at least dulling thorny intraparty tussles over contentious progressive proposals like Supreme Court expansion.

“He won’t be so captive to a certain element in his own party,” said Chuck Hagel, who worked with Mr. Biden as Barack Obama’s defense secretary and as a Republican senator from Nebraska. “In a way I think that strengthens his hand for his style of governing and how he approaches governing. There’s no other option. He’s got to reach out and work with both parties.”

Some younger Democrats have accused Mr. Biden of clinging to a bygone — and, they say, forever-gone — vision of collaborative government.

This was a week, after all, during which some Republican lawmakers indulged or even wholly embraced President Trump’s baseless, dangerous claims of wide-scale election fraud.

“Joe Biden will have defeated Donald Trump by millions of votes in a resounding victory,” said Waleed Shahid, a spokesman for Justice Democrats, a group that helped elect Representative Alexandria Ocasio-Cortez and other progressives to Congress. “And meanwhile, the Republican Party’s leadership is on television delegitimizing the next four years.”

Mr. Shahid urged Mr. Biden not to treat Republicans as good-faith governing partners. “We are just in a very different time now,” he said.

But Mr. Biden has long held himself out as a figure with uncommon powers of persuasion, one determined to see the good in people and unencumbered by rigid ideology.

The trouble for Mr. Biden now is that Republican motives and incentives will almost certainly run counter to his much of the time. When Mitch McConnell, the Republican majority leader, last faced a Democratic White House — the one in which Mr. Biden served — he said explicitly that his goal was to make Mr. Obama a one-term president.

While Mr. Biden maintained a far more cordial relationship with Mr. McConnell in those years and has said he would work with the Republican “where we can agree,” he often strained in his 2020 bid to land on a compelling explanation for why a Biden administration would succeed in fostering bipartisanship where an Obama administration could not.

His point often seemed to be that he had to try anyway. “We don’t talk to each other anymore,” Mr. Biden lamented last year, earning a scolding from some Democrats after warmly invoking the “civility” that defined his relationships with segregationist peers early in his Senate life.

But then, this has always been the question for Mr. Biden in this campaign: Is he a man for this Washington moment or an old one? Is he too fixated on the latter to understand the former?

The voters, at least, saw fit to find out.

In interviews, former colleagues seemed split on Mr. Biden’s capacity to transcend today’s pervasive partisanship, with some doubtful that the Republican posture would change much even with Mr. Trump out of office.

“I don’t think it’s transferable,” former Senator Bob Kerrey, a Nebraska Democrat who served with Mr. Biden through the 1990s, said of the chamber’s productive tenor in that age. “He was there for eight years under Obama. He knows that the Republicans can be very, very obstructionist if they want to be.”

Still, Mr. Kerrey added, maybe it was useful to be “a little naïve” and make bipartisan overtures regardless, in part to “get public opinion on his side for his big initiatives.”

Carol Moseley Braun, a former Democratic senator from Illinois, said that much of Mr. Biden’s expertise in Washington power and procedure remained relevant.

“He knows the levers of government better than anybody,” she said. She recalled his help in gaming out Senate dynamics in 1993, when she was a freshman senator seeking to block a request to grant the United Daughters of the Confederacy a renewed patent on an emblem with the Confederate battle flag.

Of course, some snapshots of compromise and collegiality from Mr. Biden’s career around that time have aged poorly with Democrats. Among other reconsiderations, he has expressed regret for the Judiciary Committee’s treatment of Anita Hill at the 1991 confirmation hearings for Justice Clarence Thomas, when many liberals say Mr. Biden, the committee chairman, was too deferential to Senate Republicans who subjected Ms. Hill to demeaning and invasive questioning.

More relevant to Mr. Biden’s present mind-set, those who know him say, are the Obama years. Their two terms were hamstrung by opposition from Tea Party Republicans who directed their fury at the nation’s first Black president and showed little interest in working with him. None of it caused Mr. Biden to abandon his instinct for consensus-building, whether or not such an aim was always possible.

“It tested his faith in that kind of thinking,” said Matt Teper, a top speechwriter for Mr. Biden at the time. “But it never manifested itself in any kind of frothy animosity.”

Several supporters cited Mr. Biden’s pledge this past week to be a president “for all Americans,” the sort of generically hopeful message they say the times demand.

In remarks on Wednesday, Mr. Biden said that once the election passed, the hour would finally come “to unite, to heal, to come together as a nation.”

No one has challenged the first part.