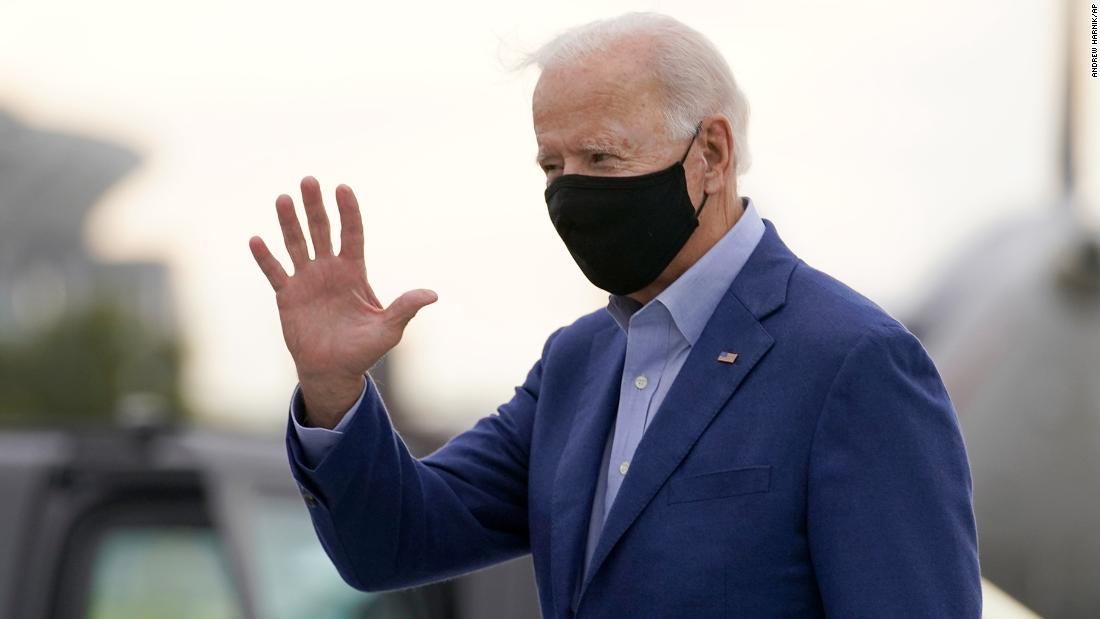 “Vice President Joe Biden and Dr. Jill Biden underwent PCR testing for COVID-19 today and COVID-19 was not detected. I am reporting this out in my capacity as both Vice President Biden and Dr. Biden’s primary care physician,” Biden’s doctor, Kevin O’Connor, said in a statement released by Biden’s campaign.

Biden said on Twitter: “I’m happy to report that Jill and I have tested negative for COVID. Thank you to everyone for your messages of concern. I hope this serves as a reminder: wear a mask, keep social distance, and wash your hands.”

Biden will continue with his plans to visit Grand Rapids, Michigan, on Friday, for a speech focused on the economy, according to an updated schedule his campaign released following the test results. But he has pared back his trip to just one event. He had initially planned to follow that speech at a union hall with a virtual fundraiser and a stop at Kent County Democratic headquarters for a voter mobilization event.

Asked why Biden decided to move forward with the Michigan trip, a Biden aide said: “Vice President Biden tested negative and was not in close contact with President Trump. He also wore a mask at all times, except for when he was on stage. And we implement social distancing, mask wearing, and other best practices in all of our campaigning.”

Biden’s supporters argued that it would be safe for the former vice president to hit the campaign trail Friday even after standing on stage with Trump for 90 minutes earlier in the week.

“Everybody who is in Biden’s world has gotten tested today — I’ve been talking to everybody,” Michigan Democratic Rep. Debbie Dingell told CNN.

“I think that what’s important to remember is that the Biden campaign followed the rules from the beginning, and so the danger point for them was being in Trump world, when the Trump family and President didn’t wear masks. But (Biden) has tested negative and other people are, and they’re obviously being careful. But they’ve been careful from the beginning,” Dingell said.

The former vice president’s running mate, California Sen. Kamala Harris, and her husband, Doug Emhoff, were also tested for coronavirus on Friday morning, with negative results, a campaign aide said. The two would continue on their planned travel to Las Vegas for Harris, and Greensboro, North Carolina, for Emhoff, the aide said.

The negative tests come after Biden and Trump’s podiums were placed 12 feet and 8 inches apart during Tuesday night’s debate, according to a source with knowledge of the debate set-up.

There was no contact from the Trump campaign or the White House to alert the Biden campaign of possible exposure, a senior Biden campaign official who was with the former vice president at the debate said. That aide said Biden’s campaign believes there is not much risk because “we were never near them.”

“Jill and I send our thoughts to President Trump and First Lady Melania Trump for a swift recovery. We will continue to pray for the health and safety of the president and his family,” Biden tweeted Friday morning.

O’Malley Dillon also told Biden’s campaign staff to “rest assured that our campaign staff, in consultation with health experts have continued to take every precaution to protect Vice President Biden, Sen. Harris, their spouses and our staff. The health and safety of the entire team has been, and will remain, our number one priority.”

At Tuesday night’s debate, after Trump’s entourage of family and administration officials entered without masks, a Cleveland Clinic doctor approached Trump’s guests, asked them to wear masks and offered masks to them, according to a reporter who observed what was happening in the room before the debate.

When the doctor, who declined to comment to the press, walked off the floor, a debate hall staffer told her, “That’s all you can do.”

“Why is the Trump family allowed to not wear masks in the debate hall while everyone else follows the rules?” Biden’s granddaughter Naomi Biden tweeted Tuesday night as the debate started.

The Cleveland Clinic did not directly address Trump’s guests ignoring mask rules, but said in a statement Friday, “Individuals traveling with both candidates, including the candidates themselves, had been tested and tested negative by their respective campaigns.”

“Based on what we know about the virus and the safety measures we had in place, we believe there is low risk of exposure to our guests,” the clinic said.