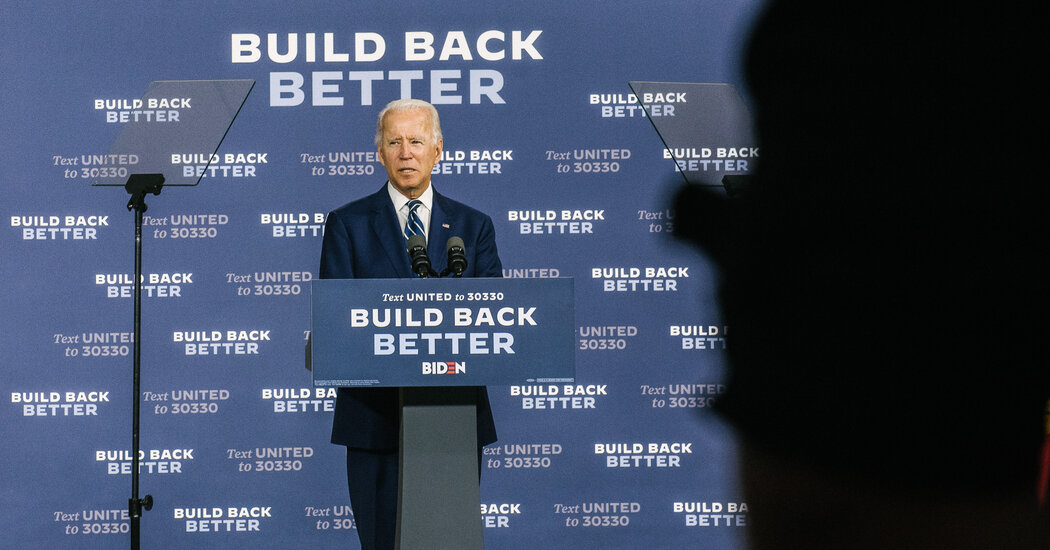 WILMINGTON, Del. — Joseph R. Biden Jr. unveiled the capstone to his comprehensive economic recovery plan on Tuesday with a speech that outlines his vision to “advance racial equity in our economy.”.

Mr. Biden delivered his address in Wilmington, Del., when he pledged that fighting systemic racism is integral to an array of his economic proposals, from housing to infrastructure to supporting small businesses.

The moment offered Mr. Biden a chance to detail a clear, positive message on racial justice, and to cut another sharp contrast with his opponent, President Trump, who has repeatedly taken incendiary actions on that issue at a moment of national reckoning over racism and police violence.

“Every instinct Trump has is to add fuel to the fire,” the former vice president said. “It’s the last thing, the last thing we need. We need leadership that will calm the waters and lower the temperature.”

Mr. Biden’s plan is the fourth piece of his “Build Back Better” proposal, an economic agenda that also encompasses manufacturing, climate and infrastructure, and caregiving plans, and takes aim at Mr. Trump’s stewardship of the economy and his impact on working families, a potential vulnerability that has emerged during the coronavirus crisis.

“This election is not just about voting against Donald Trump,” Mr. Biden said. “It’s about rising to this moment of crisis, understanding people’s struggles, and building a future worthy of their courage and their ambition to overcome.”

In recent months, as the country has grappled with devastating public health and economic problems and a growing outcry over racial injustice, Mr. Biden, the presumptive Democratic nominee, has increasingly called for ambitious measures to address the nation’s towering challenges, going far beyond the instincts toward relatively incremental change that guided him in the primary, at least compared to many of his Democratic opponents.

As he seeks to unite and energize his party around his candidacy, he has sought input from a broad range of experts and officials, including from a series of task forces assembled with Senator Bernie Sanders of Vermont, his liberal primary rival.

But Mr. Biden continues to face a lack of enthusiasm from some progressive voters, and while he won the primary with strong support from African-American voters — in particular, older ones — he faces challenges generating excitement among some younger voters of color. In the primary he was not the choice of many liberal activists of color, and he continues to face skepticism from some of them about whether he can sufficiently address their concerns.

Ahead of the speech, the Biden campaign released a policy plan on racial equity that touches on a wide range of economic issues. The plan emphasizes support for small business owners of color, promising that Mr. Biden will “leverage more than $150 billion in new capital and opportunities for small businesses that have been structurally excluded for generations,” including by increasing access to venture capital and low-interest business loans.

Mr. Biden’s plan would triple the goal for federal contracting with small disadvantaged businesses, and it says he will seek to improve the opportunity zone program that was created as part of the 2017 tax overhaul.

Mr. Biden, who has long faced anger from some voters over his leading role in the 1994 crime bill, which many experts link to mass incarceration, also addresses some criminal justice matters in the plan. He would aim to help states improve their criminal justice data infrastructure so they can automatically seal criminal records for certain nonviolent offenders.

On the call with reporters, which was conducted on the condition of anonymity, a senior campaign official said in response to a question that Mr. Biden did not object to a study of reparations, but that he was focused on more immediate actions. Another official said that Mr. Biden was not ruling out support for a “baby bonds” program — a government-run savings program for children championed during the primary by Senator Cory Booker of New Jersey — but favored a pilot first.

In contrast to the plans Mr. Biden outlined in recent weeks, which focused on major changes to certain sectors of the American economy, the proposal he is set to unveil on Tuesday is a broader effort that aims to emphasize the idea that racial justice is core to his overall policy vision.

A number of the policies highlighted in his proposal were already announced as part of other plans, like a housing proposal that would provide a tax credit of up to $15,000 for first-time home buyers, or a goal that disadvantaged communities receive 40 percent of the benefits of spending on clean energy infrastructure.