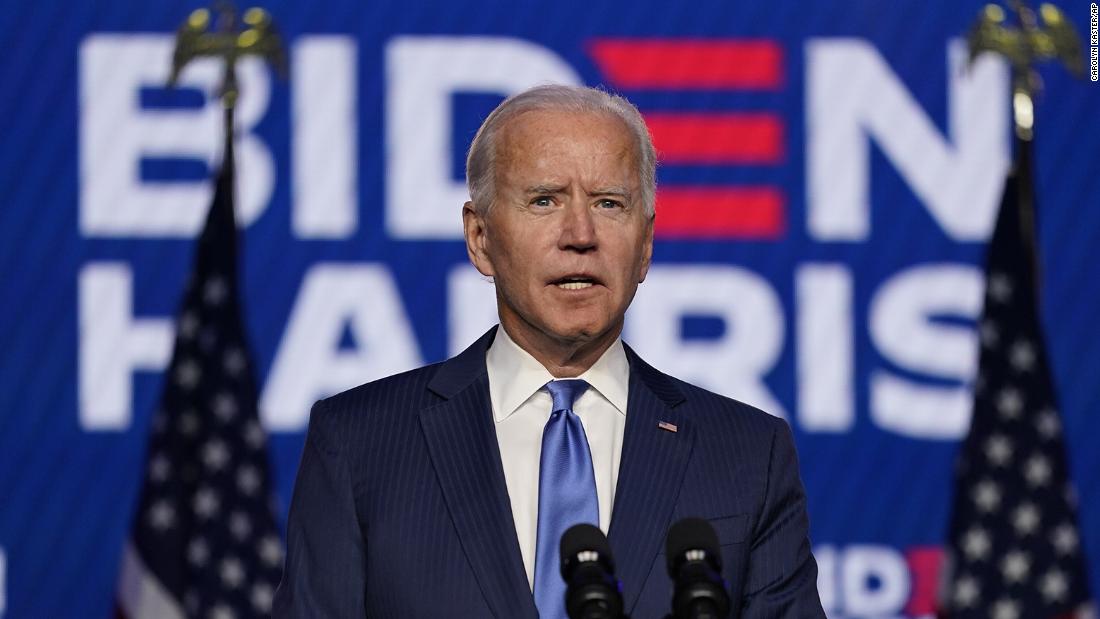 In a short address to the American people, which he had hoped would be a victory speech before vote counts dragged on, the Democratic nominee professed confidence that his win over President Donald Trump would soon be declared. He called for calm and patience at a moment of flaring national tensions, as Trump warns he will dispute the result of the election if he doesn’t win. And he painted a picture of a nascent administration that was already preparing to take on the pandemic and to help revive the economy on its first day in office.

“The numbers tell us a clear and convincing story. We are going to win this race,” Biden said.

The former vice president spent the day stretching his leads in Pennsylvania, Georgia and Nevada and holding off the President’s challenge in Arizona, as vote counting continued and he moved ever closer to the 270 electoral votes needed to win the presidency.

In the latest batch of results from the Keystone State, Biden expanded his lead over Trump, which is now up to 28,833, meaning the President’s already thin hopes of catching up are fast dwindling. Trump cannot win a second term without Pennsylvania, and if Biden captures its 20 electoral votes he cannot be stopped.

The former vice president is also stretching his leads in Nevada and Georgia, though each state remains too close to call. He leads Trump by more than 22,000 votes in Nevada and is ahead by more than 7,000 in Georgia. The count will be complicated in Pennsylvania by tens of thousands of provisional ballots and many others that require extra care for reasons that include damage, legibility, signature issues or other defects.

The President cannot reach 270 electoral votes without winning both Pennsylvania and Georgia, and at least one of the other outstanding states. Biden can get over the top by winning Pennsylvania on its own or by taking both Nevada and Arizona. The challenger currently leads the President by 253 to 213 electoral votes, CNN projects.

Trump is cutting the Democrat’s lead in Arizona, which is down to fewer than 30,000 votes with 94% reported, but it is not clear whether his margins are sufficiently wide to overtake his rival with 235,000 votes still to be counted.

Biden’s late-night appearance in Wilmington, Delaware, struck a contrast to Trump’s grievance-filled speech the night before, in which he flung false claims that the election is being stolen and vowed to fight on in the courts. Claiming a mandate to ease the nation’s angry divides, the former vice president vowed that life in America under a Biden administration would be less angst-ridden and acrimonious, and on the worst day yet for Covid-19 infections — more than 125,000 — he offered condolences to those who have lost loved ones.

Trump has not appeared in public after his grievance- and lie-filled news conference at the White House on Thursday, and as a battle of wills began to emerge between the President and Biden’s camp over the election endgame. Trump said in a tweet that Biden should not “wrongfully claim” the office of president and promised legal proceedings to try to hang on to his job. But so far the Trump campaign has offered conspiracy theories and accusations but little concrete evidence to back up its claims of corruption in the election.

The former vice president’s surprising strength in Georgia stemmed from huge turnout from Black voters in Fulton County and other suburbs around Atlanta, fatigue with Trump in Georgia’s fast-growing suburbs — which have become increasingly young and diverse in recent years — and assiduous work over more than a decade to boost Democratic registration in the state.

“Right now, Georgia remains too close to call. Of approximately 5 million votes cast, we’ll have a margin of a few thousand,” Georgia Secretary of State Brad Raffensperger said in a news conference Friday, adding, “with a margin that small, there will be a recount in Georgia.”

There is no automatic recount in Georgia, but a candidate can request a recount after votes are certified if the results are within 0.5%.

Trump’s campaign general counsel Matt Morgan said in a statement earlier Friday, “Georgia is headed for a recount, where we are confident we will find ballots improperly harvested, and where President Trump will ultimately prevail.”

No Democratic presidential nominee has won the state since Bill Clinton in 1992. Clinton narrowly defeated former President George H.W. Bush in that state in part because he and Bush were in a three-way race that included Ross Perot, an independent candidate for the presidency.

Trump refuses to back down

As the drama unfolded across the country, the President’s allies launched legal challenges and floated conspiracy theories while Trump tweeted “Stop the Count!”

On Thursday night, Trump effectively sent a signal that he has no intention of leaving power without a fight if he ends up losing the election. The speech from the White House briefing room — in which Trump falsely claimed that votes that were cast before and during the election, but counted after Election Day, are illegal votes — could end up being one of the most dangerous presidential statements in American history.

The President also made ludicrous claims that his leads on election night shrunk because Democratic officials keep finding ballots, when in fact the counts have narrowed because election officials in many states counted the vote-by-mail ballots, which favored Democrats, after the Election Day votes, which tended to favor Republicans.

Utah Republican Sen. Mitt Romney tweeted Friday that Trump’s comments about a rigged election “damages the cause of freedom here and around the world,” going further than the rest of the Senate GOP conference, where some top Republicans have continued to defend Trump’s baseless claims of voter fraud.

As the President spoke Thursday night, the daily tally of new US coronavirus infections hit 114,876, the worst daily count ever, encapsulating how Trump’s political obsessions have driven his neglect of a crisis that has killed more than 236,000 Americans.

It has long been known that Biden would benefit from a late surge of mail-in balloting that was preferred by Democrats amid the pandemic. The President spent months on the campaign trail, falsely blasting mail-in ballots as prone to fraud — one reason why GOP voters have proven far less likely to use them.

Trump cannot find a route to 270 electoral votes without Georgia and Pennsylvania, so his chances of securing reelection will hinge on developments in those two states in the coming days.

In Arizona, several tranches of votes from Maricopa County, which includes Phoenix, narrowed Biden’s lead to just less than 40,000 votes, with Trump’s team insisting the President will eventually prevail and keep his hopes of a path to 270 alive.

If Biden holds leads in Arizona and Nevada, he will get to 270 electoral votes and become the next President, regardless of what happens in Pennsylvania and Georgia.