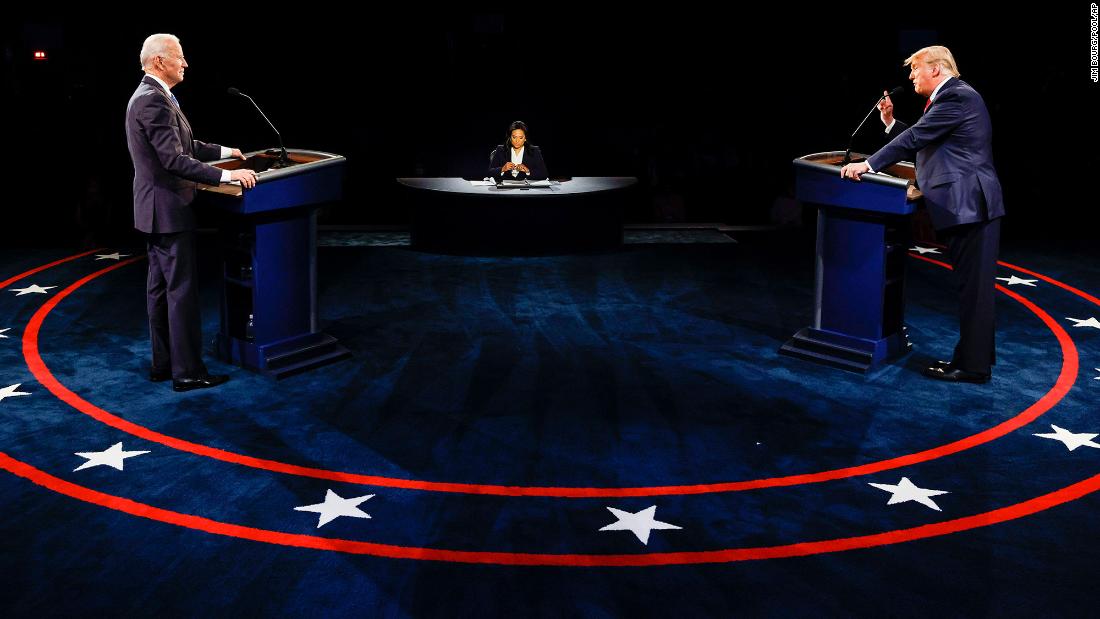 The very first sentence President Trump uttered at Thursday’s debate was false. Moderator Kristen Welker invoked the “dangerous new phase” of the coronavirus and the 16,000 deaths that were recorded since the first debate. “So as you know,” Trump responded, “2.2 million people, modeled out, were expected to die.”

CNN’s Daniel Dale flagged the comment and pointed out, “That was an estimate for *what would happen if no government or person in the US took any mitigation efforts at all.* An extreme-worst-case scenario.” In other words, no one “expected” such an agonizing outcome. The AP called this out too: “This was his first line in the debate, and it is false. The U.S. death toll from the pandemic was not expected to be that high.”

Fact-checkers won’t have a complete count of all the dishonesty until Friday or Saturday, but “from a lying perspective, Trump is even worse tonight than in the first debate,” Dale said after 45 minutes of debating.
What about Joe Biden? Well, “Biden was again imperfect from a fact check perspective,” Dale said. “He made at least a few false, misleading, or lacking-in-context claims. Trump was, as usual, a serial liar.” There’s simply no equivalency between the two and never has been. Dale told Wolf Blitzer on CNN, “With Trump you’re like ‘I Love Lucy’ at the chocolate factory. You just don’t know which one to pick up.”
>> Check out all of the fact-checks at CNN.com…
>> Earlier in the day, on Twitter, Jay Rosen hit on the “political method” behind all the smearing and lying: “Saturate your speech with things the establishment press can’t verify. Maximize conflict with their evidentiary standards. Whichever way they react — not covering, fact checking — makes for grievances you can bring to market.”

Trump “didn’t set himself on fire like he did at the first debate,” Jake Tapper said on CNN. And/but “I don’t see anything that will change the trajectory of the race in a significant way.”

Similarly, Judy Woodruff on PBS: “This was much closer to a real debate than what we saw the last time… A much more valuable debate for the American people than what we heard in the first debate.”

“Somebody owes our colleague Kristen Welker an apology,” Brian Williams said immediately after the debate. “Yeah,” Rachel Maddow said, “she’s owed an apology by the president, who attacked her over and over and over again heading into this event tonight.”

In fact, Trump said during the debate that he respected Welker’s handling of the debate, and afterward his campaign refrained from insulting her. “I’m jealous,” Chris Wallace said on Fox. “I would’ve liked to have been able to moderate that debate and get a real exchange of views instead of hundreds of interruptions.” Read Michael Grynbaum’s recap for the NYT here…

>> Dan Diamond wrote: The near-universal praise for Welker “underscores she’s the lone reporter to escape the curse of being a 2020 presidential moderator. Two moderators got steamrolled and third would-be moderator got suspended from C-SPAN. Once-glamorous job carries new risks in Trump era…”

Reaction from the president of NBC News

I asked Noah Oppenheim for his reaction to the debate — he said: “Every single person at NBC News is bursting with pride. Kristen is beloved and admired by all of us and tonight the whole country knows why.”

Oliver Darcy writes: “At times during the debate, Trump spoke the language of Fox News. This was particularly evident when he went after the ‘phony’ Mueller probe. While consumers of right-wing media probably ate up the moment, those who do not tune into Fox or talk radio might have had a hard time following along. Joshua Green put it well: ‘Trump might as well be speaking Swahili — no one but the most devoted Fox watcher can possibly follow what he’s saying.'”

Biden v. the Fox narrative about him

“Biden’s senile.” “He’s fading.” “He’s in hiding.” That’s been the message about the former VP from Fox’s most popular talk shows. Yet every time Biden takes the stage in front of tens of millions of viewers, he blows up that narrative.

Earlier this month, in a phoner on Fox, Trump said “he’s mentally gone.” Sean Hannity fixated on a boring live shot of Biden’s home to imply that the candidate is too weak to campaign. And Laura Ingraham said Wednesday night that “he’s losing it.” Yet Biden stood up straight and spoke straight to camera and rebutted Trump almost every minute. He had a couple of gaffes, like calling the Proud Boys the “Poor Boys,” but nothing eye-popping that I heard. He countered the Fox narrative…

>> Brian Lowry adds: “Even if Trump was less disruptive, Biden was considerably sharper in counterpunching and playing off his answers, like pointing out that Trump was running against Joe Biden, and no one else…”

Did the Hunter Biden attack fizzle?

That’s what Oliver Darcy thinks. He writes: “Fox has been in overdrive attacking Biden’s son this week, but when Trump brought up the issue at the debate, his attack did not land. Biden instead turned the allegation of foreign business practices back on Trump, bringing up the Chinese bank account Trump had, according to a recent NYT report. As Tim Alberta tweeted, ‘the Hunter/China issue fizzled without a memorable moment.’ That said, expect this narrative to continue dominating right-wing media through the election…”