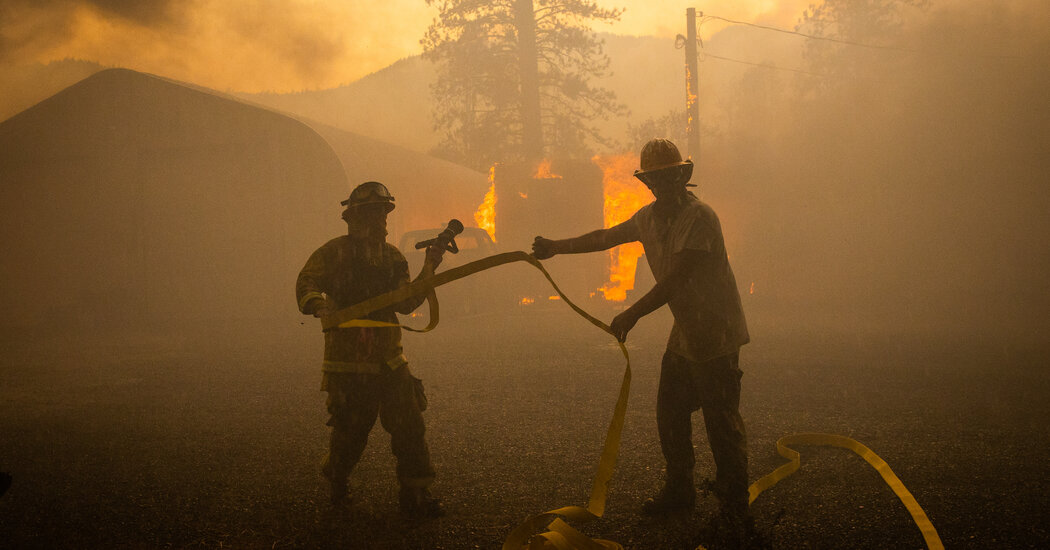 Newsom asks for help as more than 771,000 acres have burned.

Gov. Gavin Newsom on Friday pledged that California was “putting everything we have” on the wildfires ravaging the state, while acknowledging that even that was not enough to stamp out the 560 fires that have burned over 771,000 acres.

Despite having deployed almost 12,000 firefighters statewide, California was still struggling on Friday to contain the blazes in the state’s north, which are swelling further and forcing more people to flee their homes. Mr. Newsom said he had asked for help from states near and far — including on the East Coast — and even from Australia.

At least 119,000 people have already been ordered to leave their homes, Mr. Newsom said, and fire officials ordered more to flee on Friday, including along the Russian River near Santa Rosa.

In total, the fires have burned an area larger than the size of Rhode Island since last weekend, and much of that was devoured by two massive groups of fires in Northern California. Those fire groupings, the S.C.U. Lightning Complex east of Silicon Valley and the L.N.U. Lightning Complex in Napa Valley, are the seventh-largest and 10th-largest fires in recent state history, Mr. Newsom said.

And even as the fires grow further, forecasters with the National Weather Service’s Bay Area office warned that there could be more dry thunderstorms this weekend, potentially bringing a dangerous combination of lightning and wind to an already-burning region.

Five deaths have been linked to the fires, including three people who were found in a burned down house in a rural area of Napa County and who have not yet been identified. A man in Solano County was also found dead on Thursday, and a helicopter pilot died in a crash while on a water-dropping mission in Fresno County on Wednesday.

The smoke from the fires is also worsening an already oppressive heat wave and making the air unhealthy across Northern California. At the same time, the electrical grid has struggled to keep up with demand, and the coronavirus threatened illness in evacuation shelters.

Among the biggest concerns is the L.N.U. Lightning Complex, which has nearly quadrupled in size over the last two days, growing to 219,067 acres as it stretched across Napa County and four surrounding counties.

The fires in that grouping have destroyed nearly 500 homes and other buildings, many of them in Vacaville, and are responsible for the four civilian deaths as well as four injuries, according to Cal Fire, the state’s fire agency. Firefighters said those blazes are 7 percent contained.

The police in Vacaville, near Sacramento, said on Friday afternoon that people could begin returning to some neighborhoods, but many faced the prospect that their homes might have already been charred by fires that swept along the edges of the city this week.

A third combination of fires known as the C.Z.U. Lightning Complex has forced more than 64,600 people in San Mateo and Santa Cruz Counties to evacuate, including the entire University of California, Santa Cruz, campus. That group of fires has grown to more than 50,000 acres, consumed at least 50 buildings and is completely uncontained.

The S.C.U. Lightning Complex, which includes about 20 fires, has spread across 229,968 acres — largely in less populous areas — and was 10 percent contained on Friday, Cal Fire said. Its proximity to San Jose had led to some evacuation orders, and two emergency workers and two civilians have been injured.

[Sign up for California Today, our daily newsletter from the Golden State.]

Smoke is making the air unhealthy, and it’s spreading all the way to Nebraska.

The smoke billowing from the wildfires is polluting the air to unhealthy levels, and the scent of smoke is seeping into the skies hundreds of miles away, a sign of just how massive the fires are.

The air quality in several areas around Northern California grew to dangerous levels this week, particularly in Concord, northeast of Oakland, where the air quality index surpassed 200 on Thursday, marking “very unhealthy” air. The index goes up to 500, but anything above 100 is considered unhealthy. In Gilroy, south of the Bay Area, the index reached above 150 on Friday morning.

The rising smoke, which is easily visible from satellites, is also reaching into neighboring states, and as far away as Nebraska, according to the National Weather Service.

With the smoke and the prospect of a long fire season complicating efforts to control the coronavirus, doctors in Northern California are bracing for an increase in patients.

On a Zoom news conference on Thursday, doctors with the University of California, San Francisco described feeling burned out, but said they were preparing for an increase in their workload. Students, they said, have described feeling as though they are at the center of an apocalypse.

“All of these are a perfect storm of issues,” said Dr. Stephanie Christenson, an assistant professor of medicine at U.C.S.F. who specializes in pulmonary, critical care and allergies.

Dr. Christenson said that although it is too early to definitively say how wildfire smoke affects Covid-19 patients, what is known is that air pollution can inflame the lungs.

As a result, Dr. Christenson said, she’s concerned that wildfire smoke could result in “longer recovery time and even re-hospitalization,” among patients who are recovering from the virus.

For asymptomatic virus patients, the irritation from smoke in the air could irritate them into coughing, she said, which would increase the risk that they transmit the disease.

In Santa Cruz, an online network of Google spreadsheets, Facebook groups and Twitter threads has sprung up to help people manage the chaos of creeping flames, power failures and evacuation orders.

The informal network has become a lifeline for some people in need of shelter, food or supplies — and a gathering space for those offering help, even as they brace for evacuation orders themselves.

“The firefighters here are super short-staffed because there are so many fires throughout the state, so it’s kind of scary,” said Janet Kornblum, 58, a private investigator who posted online to offer a hitch for anyone in need of a tow. “It feels good to band together.”

As she keeps an eye on the fires creeping along the horizon near her home, Kristen Valenza, 37, is also monitoring her social media feeds. Her two dogs went missing during an evacuation in Boulder Creek, and she is hoping that strangers online can help her find them. (They are Lacretia, a Saint Bernard, and Pepe, a Mastiff mix.)

“There are so many people in our community who are posting and reposting to help us find animals and loved ones that are missing,” Ms. Valenza said. While she waits, she is taking care of her two children and hosting three friends whose home has burned to the ground.

Elene Johas Teener, 66, has also used social media to offer shelter — to humans and to chickens. On Thursday, she made use of an empty coop by taking in 15 hens and roosters from people who had to evacuate their homes.

“This informal network is happening,” she said. “There’s Nextdoor, there’s Facebook — all of these groups that are connecting people who really want to help.”

Ms. Johas Teener added that the coronavirus had made things difficult, with many wondering how to extend aid to others without contributing to the spread of the pandemic. “It’s weird with Covid,” she said. “You want to help out, but which catastrophe do you prioritize?”

Evacuees seeking shelter must weigh risk of the coronavirus.

A wildfire was raging outside, but inside the evacuation centers there were risks, too.

Natalie Lyons and Craig Phillips had to make a decision Thursday morning as they sat in their ash-coated Toyota Tundra under the smoky orange sky in Santa Cruz.

After fleeing the small town of Felton on Wednesday as a series of wildfires continued to burn along the Central Coast of California, they sought refuge at the Santa Cruz Civic Auditorium, an evacuation site, but the building was full — and Ms. Lyons was scared of contracting the coronavirus in an enclosed, indoor space.

“There’s some people coughing, their masks are hanging down,” said Ms. Lyons, 54, who said she had lung problems. “I’d rather sleep in my car than end up in a hospital bed.”

So that is exactly what the couple did. Their car served as a makeshift bed across the street from the auditorium, and Ms. Lyons tried to get comfortable in the back seat with their Chihuahua-terrier mix and shellshocked cat. “I hardly got any sleep,” she said.

Tens of thousands of people have been forced to evacuate from the rural areas of San Mateo and Santa Cruz Counties, Cal Fire said, and many have struggled to find a place to go, especially with the pandemic still limiting indoor gatherings.

Evacuees further up the coast near Pescadero slept in trailers in parking lots or on the beach overlooking the Pacific Ocean. Others made desperate pleas to family members and friends to take them in, and local authorities said they preferred that people assimilate into so-called quarantine pods rather than brave the virus risks of an indoor shelter.

Cenaida Perez said she smelled smoke from her house in Vacaville early Wednesday morning and ran outside with her 3-year-old daughter, Adriana. She is currently sheltering at a nearby library, but said she was worried about the coronavirus.

“Who isn’t going to be scared of that virus? It has killed so many,” Ms. Perez, 36, said in Spanish. “But also, I don’t want to die like this, burned to death.”

A state fire official described it as a “historic lightning siege” — the nearly 11,000 bolts of lightning that struck California over 72 hours this week and ignited 367 wildfires.

Such a flurry of strikes is unusual in California, where it normally takes a full year to tally up 85,000 or so lightning flashes, said Joseph Dwyer, a physicist and lightning researcher at the University of New Hampshire. That is far fewer than Florida, one of the most lightning-prone states, which averages about 1.2 million flashes a year.

Lightning occurs during storms with strong updrafts. During these storms, charged ice particles in clouds collide, generating an electric field. If the field is strong enough, electricity can arc to the ground as lightning, which can ignite dry vegetation: Nationwide, about 15 percent of wildfires start this way.

Strikes across the United States are expected to increase with climate change, as warmer air carries more water vapor, which provides the fuel for strong updraft conditions. A 2014 study estimated that strikes could increase by about 12 percent per 1.8 degree Fahrenheit (1 degree Celsius) of warming, or by about 50 percent by 2100.

California has been experiencing an intense heat wave this week, and while it is too soon to say precisely how climate change influenced this specific bout of hot weather, “it is likely that there was more lightning because of global warming,” said David M. Romps, a physicist at the University of California, Berkeley, and the lead author of the 2014 study.

“What you could say with certainty is that it was hotter with global warming,” Dr. Romps said. “And certainly the vegetation was drier because of warming. If there were also more lightning strikes, as we would expect, that’s just an additional bump in the direction of more fire.”