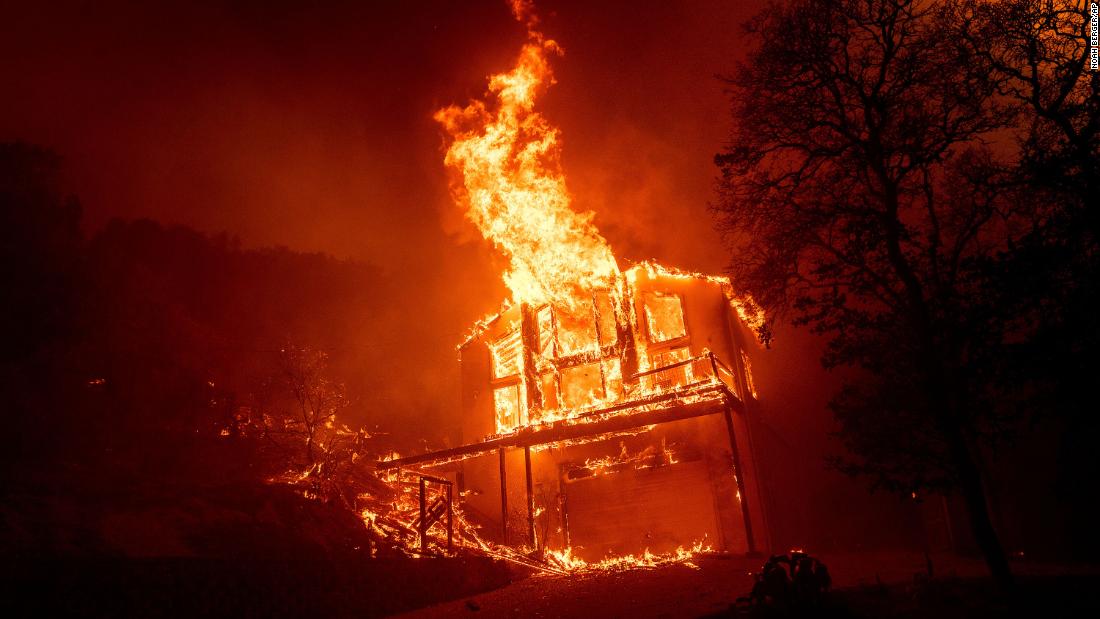 More than 500,000 acres — equivalent to almost 80% of the land in Rhode Island — have burned, fire officials said Thursday.

“Not only are we dealing with Covid, but with also the heat and now the fires,” evacuee Cheryl Jarvis said Thursday. The 69-year-old has no idea whether her house is still standing.

Jarvis evacuated to the Ulatis Community Center in Vacaville, but she refuses to go inside. Instead, she and her daughter have been sleeping in her Toyota Prius.

“We didn’t want to go inside because there are too many people,” Jarvis said, citing Covid-19 concerns.

And then there’s the smoke. Several global air quality monitoring websites show that the levels in the Bay Area of California are worse than anywhere else, including locations generally regarded as having the poorest air quality such as India and eastern China.

“The employee was in the Gates Canyon area clearing infrastructure (pole, lines, etc.) to make the area safe for emergency responders,” according to state fire agency CAL FIRE.
The LNU Lightning Complex Fire is actually a cluster of blazes that have destroyed 105 structures and charred at least 131,100 acres. As of Thursday morning, it was 0% contained.

And that’s not even the biggest wildfire raging.

The SCU Lightning Complex fire has torched more than 137,000 acres.
On Wednesday, a helicopter pilot who was making water drops on the Hills Fire in Fresno Couny died in a a crash, Cal Fire said. No one else was on board when the helicopter went down.

“This is an incredibly emotional and stressful time for many of us who have endured many fires and natural disasters over the last couple of years,” Sonoma County Sheriff Mark Essick said.

Millions are under red flag warnings

While the peak of the California heat wave has passed, more than 7 million people in the West are under red flag warnings Thursday — meaning “warm temperatures, very low humidities, and stronger winds are expected to combine to produce an increased risk of fire danger,” the National Weather Service said.

And across the Southwest, more than 26 million people are under heat warnings or advisories Thursday, including residents in Las Vegas, Phoenix and Los Angeles, CNN meteorologist Dave Hennen said.

This week alone, about 11,000 lightning bolts hit the state within 72 hours — igniting hundreds of fires, Cal Fire spokesman Jeremy Rahn said. Statewide, there are a total of 367 fires — 26 of them considered major blazes, officials said.

More than 28,000 people in San Mateo and Santa Cruz counties have evacuated because of the enormous CZU Lightning Complex Fire, according to Cal Fire.

Several of the lightning-sparked fires in the area have merged and continue to spread, in part due to “high night-time temperatures, inaccessible terrain and limited resources,” Cal Fire said.

The nearby University of California, Santa Cruz, is bracing for an evacuation and will send an alert if campus evacuation is necessary, according to a statement on the school’s website.

Fire officials have said they don’t have an exact number on how many people have been told to leave their homes.

The top priorities are the safety of the firefighters and the public, evacuation planning, and the protection of structures and infrastructures, Cal Fire Operations Chief Chris Waters said.

Gus Valerian woke up Wednesday to someone pounding on the door of his home in Vacaville, about 50 miles northeast of San Francisco. It was about 2 a.m., and a fire official warned of the roaring blaze near his family’s 16-acre property.

Valerian rounded up his wife, Kersti, and their 3-year-old twins, Lincoln and Emmy, and bolted.

“We just grabbed a bunch of clothes and jumped in the truck, got the cats and dogs and headed off to Oakland,” he told CNN affiliate KGO.
Elsewhere in Vacaville, one of the hardest-hit cities, inmates and staff at a state prison are getting N95 masks to help with air quality.

Outside Vacaville, Thuy Ngo watched Wednesday as flames consumed the barn on his 30-acre farm property.

“We didn’t think the fire would come down here this fast,” he told CNN. “It’s just heart-wrenching. … It’s just gone.”

As if the pandemic, wildfires and scorching heat wave weren’t bad enough, some Californians have lost electricity as the state’s power grid struggles to keep up with demand.

Rolling blackouts were implemented over the weekend when an intense heat wave caused record-setting temperatures across the state, including a high of 130 degrees in Death Valley on Sunday.

Gov. Gavin Newsom demanded an investigation into the power outages, which he said are unacceptable.

“These blackouts, which occurred without warning or enough time for preparation, are unacceptable and unbefitting of the nation’s largest and most innovative state,” Newsom wrote in a letter to the California Public Utilities Commission and the California Energy Commission.

Experts have warned that wildfires fueled by the climate crisis will be the new normal in California. Warm-season days in the state have increased by 2.5 degrees since the early 1970s, according to a study published last year in the journal Earth’s Future.

“The clearest link between California wildfire and anthropogenic climate change thus far has been via warming-driven increases in atmospheric aridity, which works to dry fuels and promote summer forest fire,” the report said.

“It is well established that warming promotes wildfire throughout the western US, particularly in forested regions, by enhancing atmospheric moisture demand and reducing summer soil moisture as snowpack declines.”

Park Williams, the study’s lead author and a professor at the Lamont-Doherty Earth Observatory at Columbia University, said human-caused warming of the planet has caused the vapor pressure deficit to increase by 10% since the late 1800s, meaning that more evaporation is occurring.

“This is important because we have already seen a large change in California wildfire activity from the first 10%. Increasing the evaporation has exponential effects on wildfires, so the next 10% increase is likely to have even more potent effects,” he told CNN last year.

While the West is suffering record-breaking heat, wildfires are ravaging many parts of the US — with red-flag warnings issued from the Northwest into the Rockies.

At least 77 large complexes of wildfires have burned in 15 states nationwide this week — almost a third of them in California, according to the National Interagency Fire Center.

The fires have burned at least 649,054 acres in the 14 states where fires are still spreading, it said.

Some states with multiple fires include Arizona with 11, Alaska with seven, and Colorado with five.