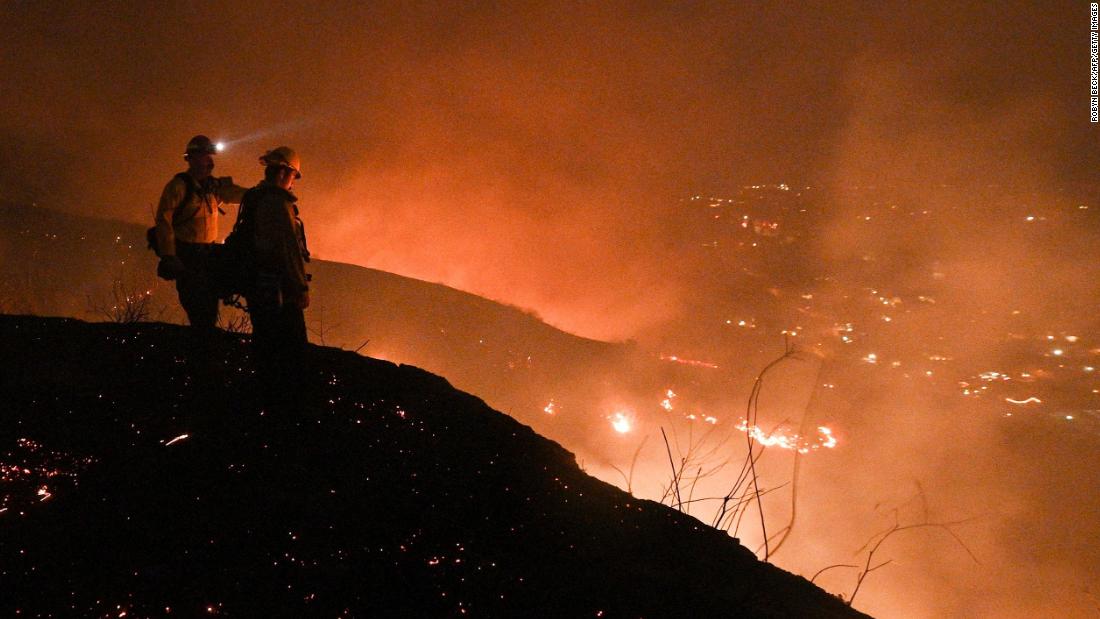 The Silverado Fire near Irvine has charred 12,600 acres and is 5% contained. Just north of that, the Blue Ridge Fire near Yorba Linda has ballooned in size, more than doubling its footprint, currently calculated at 15,200 acres. The fire, which is 0% contained, has damaged 10 homes.

More than 80,000 people have been told to stay away from their homes, including some NFL football players for the Los Angeles Chargers.

That number is down by about 20,000, as many residents who fled Irvine have been told the area is safe now.

Southern California Edison said a power line may have played a role in igniting the Silverado Fire, according to a report filed with California Public Utilities Commission.

The initial safety incident report describes overhead electrical facilities in the area where authorities think the fire started but notes no activity on the circuit.

“…(It) appears that a lashing wire attached to a telecommunications line may have contacted SCE’s power line above it, possibly starting the fire,” SCE spokesman Chris Abel told CNN.

Nearly 130,000 customers in California were without power Tuesday afternoon, according to PowerOutage.US.

Fire officials said 1,800 people are battling the two fires, and on Monday two of them were critically injured.

Fennessy said Tuesday they were “fighting for their lives.”

“I know them personally. They are strong. Having gotten to know their parents over the past 24 hours, I can see where they got their strength, Fennessy said. “It’s tough to feel this helpless.”

The men, ages 26 and 31, are part of Orange County Fire Authority’s ground crew. Their names haven’t been released. The team uses hand tools to stop wildfire flames from progressing, much like hotshots.

Three other firefighters had minor injuries, were treated at the hospital, and released.

As Ed Pascasio fled from the Silverado Fire on Monday afternoon with his wife, niece and sister-in-law, he watched embers flying toward their neighborhood.

“The sky was orange, kind of like doomsday,” he said. “I’ve never seen it change dramatically that fast.”

“A lot of neighbors were leaving at the same time. Everyone was shocked by the speed of it all,” he said.

This has been a devastating year for fires. At least 8,000 fire incidents reported by Cal Fire have burned a record 4 million acres and claimed the lives of 31 people this year so far. And dry, windy conditions have prompted power shutoffs to prevent more.