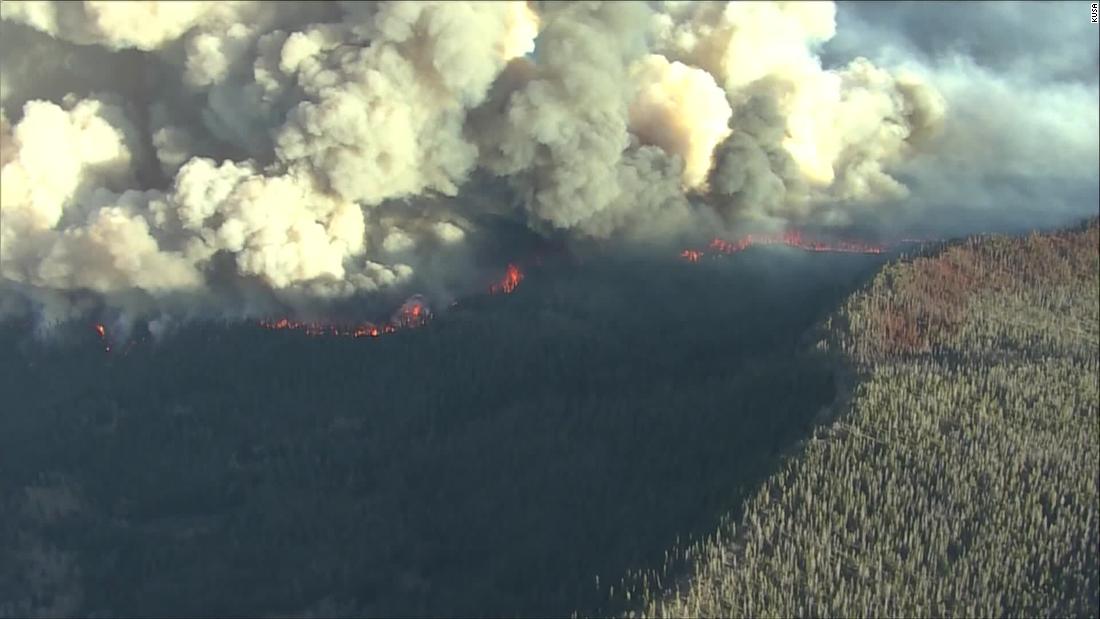 Long lines of cars made their way out of the area as the fire continued to grow Thursday. And traffic out of the small town of Estes Park was crawling as hundreds tried to evacuate, according to CNN affiliate KUSA.

Families who have already fled the area have been watching their homes go up in flames on home security cameras. One woman saw the fire rush toward her family cabin and doesn’t know if anything is left of her house.

“I can’t begin to tell you, it was so gut-wrenching when I opened up the app and I saw fire coming up our driveway and up the hillside,” Katy Brown told CNN affiliate KUSA. “It was horrific, absolutely horrific to watch. I’ve never experienced anything like that before.”

As the cars clogged the highways with people trying to flee the fire in Larimer County, Colorado, a thick layer of smoke could be seen hanging over the area blocking out the sun. One resident who was told her home had been destroyed didn’t know how to react.

“You’re numb. You’ve been told that it’s gone but you don’t want to believe it. So until you see the ashes you just survive,” she told KUSA.

Another woman who was told she had lost everything says she’s still finding it hard to believe. “You think of the craziest things like the Christmas presents you just bought for your grandkids, and the bedrooms you prepared for them. And you never think it’s going to happen to you,” Marjorie Cranston told CNN affiliate KMGH.

But some who are fleeing the flames are still hopeful. “It’s sad, a lot of people are affected by it. We’re fortunate right now … but tomorrow is another day,” one man told KUSA.

The weather conditions are not helping either.

Strong winds and dry weather are fueling an explosive growth of fires in Colorado. And the weather conditions are likely to stay the same for the next couple of days.

The dry conditions will remain until Friday night, when some light precipitation will begin as rain and then turn into snow for the weekend, according to CNN meteorologist Brandon Miller. The weekend snow of a couple inches could finally help firefighters contain the flames. As of now, 93% of the West remains under some sort of drought condition.

The East Troublesome Fire in Colorado grew about 50,000 acres Thursday, according to the latest update from Incident Commander Noel Livingston.

The type of growth the fire is experiencing is “really unheard of for a fire in this part of the world, in timber,” Livingston said.

Livingston said incident command has orders in for additional resources to fight the fire. He added that the cause of the fire is still under investigation.

The National Interagency Fire Center says there are 60 large fires that have burned more than 3.9 million acres across the country. And firefighters are continuing to make progress toward containment goals on large fires in several states.

CNN’s Rebekah Riess and Joe Sutton contributed to this report.