Chaotic Scenes in Portland as Backlash to Federal Deployment Grows 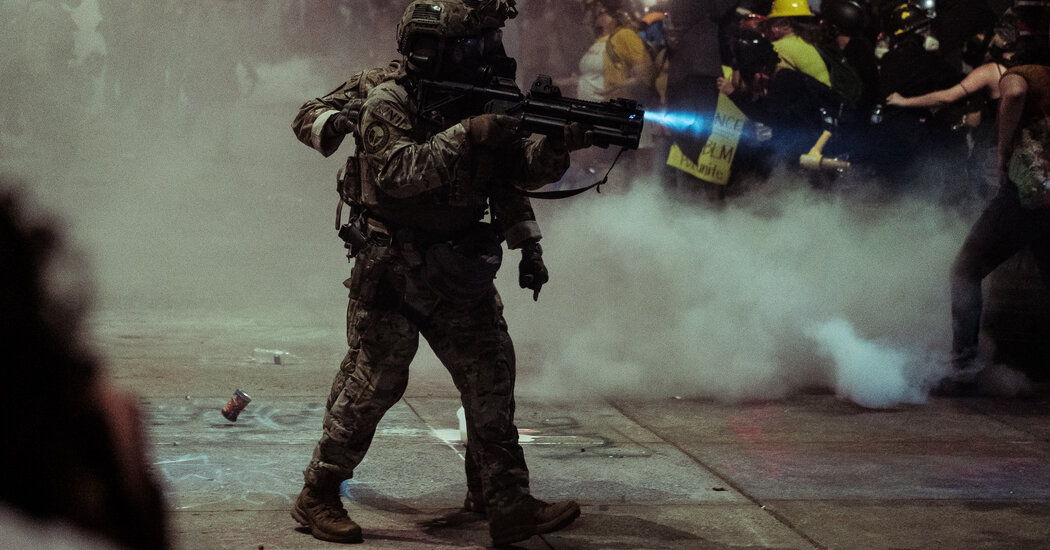 PORTLAND, Ore. — With a ski helmet and goggles on her head, Allison Hyder said she had told her family members that she planned to stand at the rear of protests in downtown Portland. But, in the early hours of Tuesday, the grandmother of five found herself right up front, locking arms with other mothers dressed in yellow.

Standing with a pack of other protesters, she chanted in front of the boarded-up entrance to the federal courthouse. Even as some in the crowd began prying at the wood affixed to the building, leaving Ms. Hyder uneasy about where things were headed, she remained resolute.

“I am the face of anarchy,” Ms. Hyder said. “The people of the U.S. need to know that moms, grandmas and nurses are out here in the middle of the night demanding rights for everybody.”

The demonstrations that have shuddered through Portland for 54 consecutive days have drawn out a complicated mix of emotions and grievances, and an array of people who are expressing them.

In a state with a deep history of racial-exclusion laws and a spirited protest tradition, the Portland protests have persisted since George Floyd’s killing even as Black Lives Matter demonstrations have waned in parts of the country.

But some leaders in the Black community, grateful for a reckoning on race, worry that what should be a moment for racial justice could be squandered by violence. Businesses supportive of change have been left demoralized by the mayhem the protests have brought. The city’s mayor, Ted Wheeler, despised by many of the protesters, has now been fighting to have federal officers leave them alone.

Amid the Gordian knot of grievances and escalations, most everyone seems to agree about one thing: The combative deployment of camouflaged federal agents has only made things worse.

President Trump, in pushing a law-and-order message for his re-election campaign, has embraced a dark vision of Portland as a lawless place filled with people who “hate our country.” His administration’s crackdown has brought armed officers from a wide variety of federal agencies to the streets, where they have been firing tear gas and pulling protesters into unmarked vans.

The president’s portrayal of Portland and the crackdown he has unleashed have infuriated protesters who see Mr. Trump as trying to use the city’s unrest as political theater during an election year. They say he is forcing a federal police presence on a city that doesn’t want it — a city with such a rich tradition of protest that an aide to another Republican president, George Bush, reportedly referred to it as Little Beirut.

While the protests have consumed parts of downtown at nighttime, much of the city has been left untouched. By day, boaters putter up the Willamette River while joggers run down the trail alongside it. On Monday evening, large groups of diners were eating on outdoor patios a few blocks away from the county’s Justice Center, where protesters were amassing for the night.

To the protesters, the president’s unusual deployment of federal power has provided yet more compelling evidence that their fears about rising fascism in the United States are justified.

In the Portland area, activists aligned with the loosely-organized group known as antifa have long denounced police militarization and a punishing criminal justice system, and have clashed with the police in recent years. The protests of the last seven weeks developed a near-nightly cycle of conflict between protesters and local police, with officers reacting to objects being thrown by protesters and protesters expressing alarm by the use of tear gas that impacted peaceful people.

Reflecting an oft-heard refrain, Angel Almanza, 44, said a government can only suppress people so much before they will respond in kind.

“This has been an act of self-defense,” Mr. Almanza said.

The strife on the streets escalated with the arrival of federal forces, which have relied heavily on tear gas, munitions fired from paintball-style guns and batons.

Among the others concerned by the federal crackdown was Joey Gibson, a far-right activist who has long battled with Portland’s antifa demonstrators. He said he found it somewhat frightening to see video of one officer whacking a Navy veteran with a baton, and he worried that the Trump administration was setting a precedent that would encourage other presidents to embrace a more expansive use of federal forces.

On Tuesday morning, dozens of agents moved around the streets and at times threw people to the ground to detain them. As federal officers appeared to try detaining one person, others in the crowd rushed to free the person.

The Portland authorities have cited ongoing troubles with the protesters, and on Tuesday the police said a jewelry store had been looted.

The nightly protests have also alarmed businesses in downtown, who were first hit with widespread looting in the aftermath of Mr. Floyd’s death in Minneapolis on Memorial Day and have struggled to navigate the weeks since. Stacey Gibson, who owns a Subway sandwich shop downtown, said the store’s windows have been boarded up much of the time, which has contributed to shrinking sales already limited by the coronavirus and related lockdowns.

Ms. Gibson said she was frustrated at a Police Department which she said cannot respond when there is a problem and at city leaders who have been unable to find a resolution. She is not optimistic about the future of her store, either.

“At this point, I’m just trying to figure out how to get out and to minimize the damage,” Ms. Gibson said.

The protests after Mr. Floyd’s death drew thousands to the streets in Portland, creating powerful images of crowds lying face down on the Burnside Bridge in honor of Mr. Floyd.

While the numbers dwindled over the subsequent weeks and Gov. Kate Brown expressed a belief that things were beginning to cool off, the crowds have surged back in recent days, with protesters chanting “Feds go home” and focusing much of their ire on the federal courthouse building.

The demonstrations have continued to have a strong component of calls for racial justice, including on Monday night, when thousands chanted “Black Lives Matter” and young Black activists led the predominantly white crowd in speeches and song.

But some Black leaders have grown wary of the persistent unrest. Pastor J.W. Matt Hennessee, who has participated in demonstrations and considers this a hopeful moment for racial reconciliation, said he worries that the disruptive elements of the protests may be pulling the focus away from racial justice.

“In many ways it has distracted from the message of early June,” he said. He called on protesters to meet to discuss a path forward and help find a resolution.

The mayor and the governor have both called on federal forces to leave in order to ease tensions and give the city space to resolve the differences.