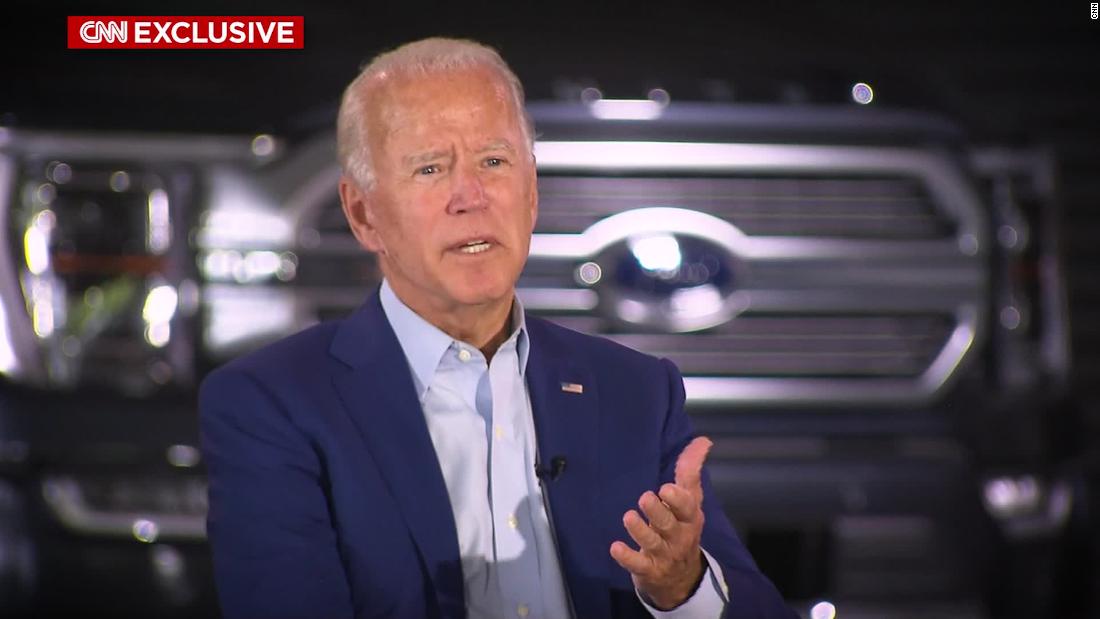 In an interview with CNN’s Jake Tapper, the former vice president said Trump’s comments to Woodward — made in a series of 18 interviews for the journalist’s upcoming book “Rage” — were “not a surprise.”

“You wonder why people in the intelligence community wondered from the very beginning whether you could share data with him, ’cause they don’t trust him. They don’t trust what he’ll say or do,” Biden said. “He seems to have no conception of what constitutes national security, no conception of anything other than, what can he do to promote himself?”

Biden cited an Axios report that Trump asked whether nuclear bombs could be dropped in the middle of hurricanes to dissipate them before landfall, which Trump has denied. He also pointed to Trump’s comment last year that the Continental Army “took over the airports” from the British in the Revolutionary War, more than a century before airplanes existed. Trump blamed a faulty teleprompter at the time.

“This is the guy who said maybe the way to deal with hurricane is drop a nuclear bomb on them. I mean — seriously, he said it!” Biden said. “I mean, God. Or you know, the problem with the Revolutionary War was they didn’t have enough airports. I mean, I just — it is beyond my comprehension.”

Biden then pointed to The Atlantic’s recent report that Trump had referred to those killed and injured at war “losers” and “suckers.” He highlighted his deceased son Beau Biden’s service in Kosovo and in the Iraq war, “and all the people with him, the people who died. They’re suckers? I mean I can’t fathom.”
Visit CNN’s Election Center for full coverage of the 2020 race

“They’re heroes. They really are heroes. Duty, honor, country,” Biden said. “He talks about can you repeat four words in a row or whatever his little IQ test or dementia test he took, he doesn’t understand duty, honor, service, country. He doesn’t get it. Or if he gets it he doesn’t care about it.”

The interview took place the day Biden visited Macomb County, a key swing region in Michigan. Trump won Macomb County by 12 percentage points in 2016, making him the first Republican to win the county since 1988. It’s representative of the type of territory that Barack Obama won twice, then Trump won four years ago, that Biden hopes to shift back into the Democratic column on November 3.

Biden also touted his role in the Obama administration’s economic recovery effort in 2009, and pointed to the auto industry bailout. And he complained that Trump has not enforced “Buy America” laws.

Biden criticized Trump’s dealings with countries like North Korea and Iran, saying he has lent them credibility.

“I mean, this ‘America First’ has made America alone,” he said.

He also criticized the tax cuts enacted by Trump and a then-Republican-led Congress. Biden also said he would raise taxes on those making more than $400,000 per year, lift corporate income taxes to 28%, and would impose new penalties for corporations that send jobs overseas to manufacture goods that are then sold back into the United States.

“We’ve got to get people investing. And so the idea that we take that money and put it into new investments and manufacturing and education, and health care, I mean, you know, these are things that matter to middle class families,” Biden said.

The 77-year-old Biden said he would not conceal anything about his health status if he is elected president.

Previous presidents, including Franklin D. Roosevelt, John F. Kennedy and Ronald Reagan, have not disclosed issues related to their health.

Trump made a surprise visit to the Walter Reed Army medical center last year. Trump had undergone a “quick exam and labs” as part of his annual physical out of anticipation of a “very busy 2020,” the White House had said of the trip at the time.

In a new book, The New York Times’ Michael Schmidt writes, however, that he learned “in the hours leading up to Trump’s trip to the hospital, word went out in the West Wing for the vice president to be on standby to take over the powers of the presidency temporarily if Trump had to undergo a procedure that would have required him to be anesthetized.”

Trump and his doctor asserted after Schmidt’s reporting that an ambiguous trip to Walter Reed last year was not in response to a mini-stroke — though neither Schmidt nor other news outlets had suggested Trump had suffered a mini-stroke.

“And when it comes to Donald Trump versus me, just look at us. OK? Just look at us. Who seems to be in shape? Who’s able to move around?” Biden said, laughing about Trump and his allies calling him “Slow Joe.”

“Donald Trump — just look at us both, watch us, and determine whether or not you think I’m misleading anyone. Not you personally, but the public,” Biden said. “You know, look at me. Judge me based on — I know what the job takes. I’ve sat for hundreds of hours in the Situation Room. For eight years I was vice president in every major decision. I know how difficult the job is.”

He added: “And one more thing I’ll do, I’ll take responsibility. I’ll acknowledge my mistakes when I make them and I’ll level with the American people.”