Consumers Came Back in June, but for How Long? 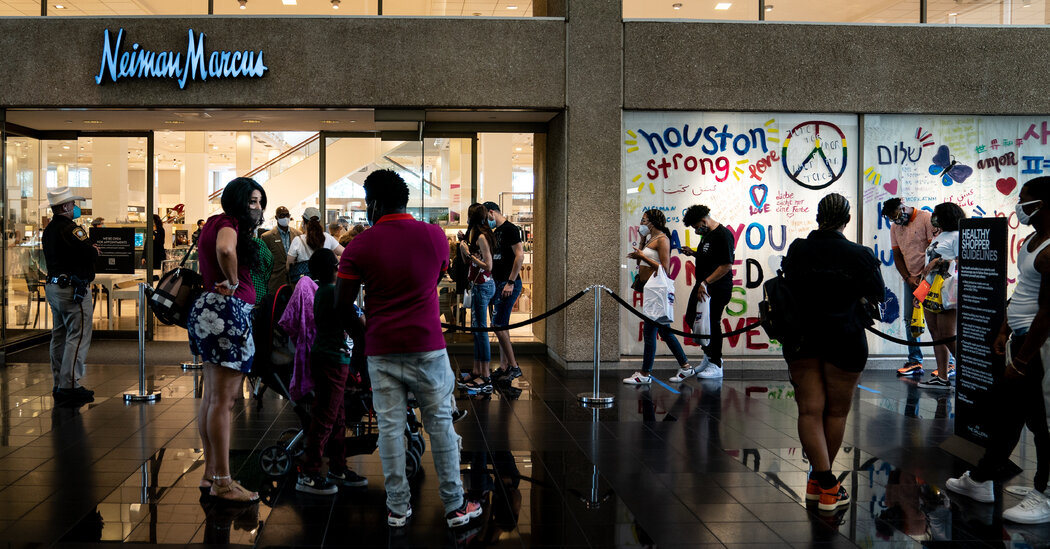 The American consumer came back last month, with retail sales increasing 7.5 percent from May as stores reopened in warm weather, shoppers shook off lockdown fatigue and the federal government pumped trillions of dollars of stimulus into the economy.

The jump, which sent spending back to just below where it was in February before the coronavirus pandemic sent the country into a tailspin, seemed to be cause for celebration after a record rebound in May.

“I feel like the consumers are just fed up,” said Andrew Moquin, who reopened his jewelry store outside Buffalo early last month. “They are moving on with their lives and they are saying, ‘I can’t solve these problems,’ whether it be Covid-19 or the divisiveness in the political arena. They want to be happy or they want their loved ones to be happy. You can only contract for so long before something expands.”

But the looming question is whether the robust recovery is sustainable. And there are already ominous signs throughout the broader economy that the rebound may fizzle, as stimulus money, unemployment benefits and tax refunds fade away and the virus continues to spread. On Thursday, new claims for state unemployment benefits exceeded one million for the 17th consecutive week and while the overall claims remained relatively flat, they rose in California, Florida and Georgia, where infections are climbing.

The retail sales report released by the Commerce Department on Thursday reflected spending in June, before the surge in virus cases forced some businesses to close down again and worried consumers anew. More up-to-date credit card data compiled by a team of researchers at Harvard University and Brown University shows that consumer spending rebounded relatively steadily from mid-April to late June, but has been roughly flat since then.

Cellphone mobility data analyzed by the Federal Reserve Bank of Dallas tells a similar story, showing activity leveling off in July, and falling outright in states such as Arizona, Florida and Texas, where virus cases have been rising. An analysis of the same underlying data by the American Enterprise Institute found a particularly steep drop in visits to retail stores and other businesses.

“Looking ahead to July or August it starts to become more challenging to repeat the gains we have been seeing,” said Michelle Meyer, head of U.S. economics at Bank of America.

Malls and other retailers that were deemed nonessential during lockdowns reopened in June and are now facing the prospect of closing again. Apple, one of the most prominent retailers, said it closed about 100 U.S. stores for a second time in recent weeks. Walmart, the nation’s biggest retailer, joined chains like Best Buy and Starbucks this week in mandating face masks inside all of their stores, underscoring the health risks that retailers are struggling to navigate.

Still, Americans spent more last month than they did in June 2019, even as unemployment reached levels not seen since the Great Depression, cities were roiled by civil unrest and the threat of the virus loomed across the country. But the pandemic has altered which businesses are receiving that money, and the monthly sales report doesn’t fully reflect the huge shifts in how and where Americans have been shopping since the pandemic took hold.

The divide has grown between retailers considered “essential” and those deemed “nonessential,” and temporary closures delivered a severe blow to many large apparel chains, department stores and malls. High-profile bankruptcies since the beginning of May have included J.Crew, J. C. Penney, Brooks Brothers and GNC, and many retailers like Macy’s and Levi’s have cut corporate jobs in addition to furloughing or laying off store workers. Shifts to online shopping and pickup-only operations led to job reductions at retailers and restaurants.

“It’s a completely unevenly distributed set of numbers,” said Sucharita Kodali, a retail analyst at Forrester Research. “The good news is that this does indicate there’s an appetite for spending, but it’s people who are continuing to spend a lot on things like toilet paper and hand sanitizer rather than the discretionary items they were buying before.”

On Thursday, the Labor Department reported that 1.3 million new claims for state unemployment benefits were filed last week, virtually the same number as the week before. It was a slight drop from 1.31 million in the week ending July 4 and far lower than when they twice topped six million in late March and early April.

But the new claims are still persistently high. Even in the aftermath of the financial crisis in early 2009, the highest weekly figure for new claims was 665,000.

“It’s shocking,” said Mickey Chadha, a senior credit officer at Moody’s Investor Service. “The economy is still very strained. But the American consumer is surprisingly resilient. This is going to be a consumer-driven recovery.”

Mr. Moquin, the jewelry store owner, said that after three months of lockdown it took some time before customers returned.

But over the past two weeks, it was as if a switch flipped and sales have “been on fire,” he said. With the number of coronavirus cases declining in New York, and businesses staying open, Mr. Moquin’s customers are back in force, buying “anything with diamonds.”

A big driver of the renewed spending, economists say, is government stimulus. Rather than people socking away their bolstered unemployment benefits in savings, the retail sales numbers show that the money was being spent.

But when many of those benefits run out, as they are scheduled to do later this month, the broader retail recovery could also fizzle, even if the virus is brought under control.

“People are scared that this recovery bounce might be one and done,” said Beth Ann Bovino, chief U.S. economist at S&P Global.

Retailers whose wares are suited to this particular moment, as varied as home improvement chains and bicycle sellers, are also at an advantage. For example, spending has been shifting from traditional entertainment to what analysts have called “solitary leisure activities,” bolstering sales of bicycles, coolers and drinkware for parks and beaches, and hiking and camping gear, according to a Bank of America research note this month.

The June retail sales report showed a 27 percent jump in the category of sporting goods, hobby, musical instruments and bookstores, which rose even compared with June 2019, after having surged in May.

Megan Searfoss, the owner of Ridgefield Running Company, a running store in Ridgefield, Conn., seems to be a beneficiary of the trend. She had made plans earlier this year to expand to Darien, Conn., in time to capitalize on excitement around the Olympics, the New York City Marathon and the high school cross country season.

“All that stuff went away,” she said. But Ms. Searfoss decided to forge ahead with the Darien store, which opened on Thursday, motivated by changes she made to her operations in recent months — like virtual fittings and same-day deliveries that were faster than Zappos and Amazon — and her conviction that small businesses have become more appealing amid the pandemic.

“Big malls may be going away, but this is not, as long as a small business is investing in technology and experience,” Ms. Searfoss said. Still, she acknowledged that she was nervous about the prospect of another shutdown.

Ms. Kodali of Forrester said, “The challenge is that option is still on the table for the remainder of the year for a lot of states because their numbers are just out of control.”

She continued, “The idea was that the March and April time frame was the only time we were going to have to deal with it and things have gotten so crazy, it’s a viable discussion again. If it happens again, we are going to see another month like we saw in April.”

Many retailers were already under pressure as the pandemic radically shifted the shopping experience well outside the bounds of what anyone would consider relaxing.

Lee Peterson, an executive vice president in Columbus, Ohio, at WD Partners, a strategy, design and architecture firm, said that while there was an initial burst of interest in shopping at newly reopened stores, consumers have largely realized that the experience has become “more restrictive, more cautious and there’s so many alternatives.” Face masks, plexiglass, tape on floors and the notion that clothing must be sanitized after the fitting room are not particularly conducive to getting people into stores, he said.

The retail industry has traditionally looked to back-to-school shopping in July and August as a distinct season ahead of the fall, but even that is expected to be upended as schools and colleges around the country scramble to lay out plans for either virtual or in-person instruction. More purchases are expected to be made online, and skew more toward digital products rather than apparel and traditional school supplies, according to a recent survey by Deloitte.

Connie Medina is still waiting for her customers to return after reopening her shop, Your CBD Store, in Albany, N.Y., early last month.

At first, a few stalwart customers did return to buy up CBD oils and edible products that are used for healing and wellness. But the foot traffic along her street and to nearby restaurants has been sparse.

“People are not coming out, they are staying home,” she said.