Dangerous hotspot underscores one of the worst political calls in history 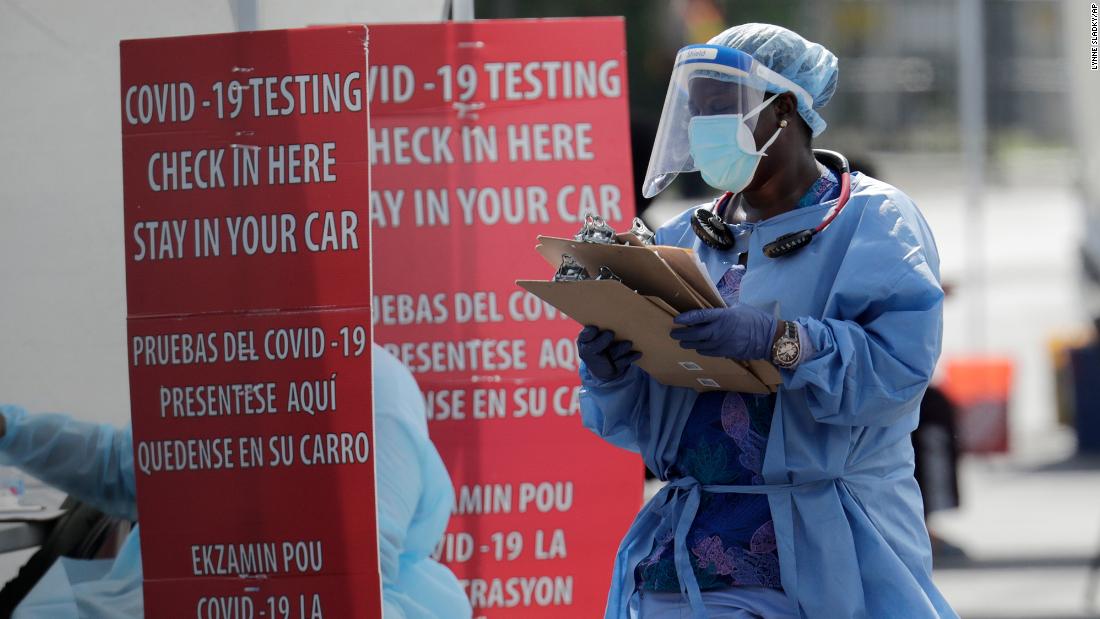 The Sunshine State recorded more than 15,000 new infections on Sunday — the highest number of new cases in a single day by any state — as the pandemic raged across southern and western heartlands including Texas, Georgia and Arizona. The surge came two months after many states, disregarding government guidelines, opened up bars, gyms, hair salons and other businesses.

Fauci, who has not spoken to the President for weeks, has contradicted Trump’s false claims that the United States is leading the world in the coronavirus fight. He’s also refuted Trump’s claim that 99% of Covid-19 cases are “totally harmless.”

Fauci’s positions have evolved with the science — including his stance on masks, which he initially said weren’t proven to be beneficial in everyday life and should be reserved for health care workers. The White House apparently sees no irony in attacking his track record when the President spent months denying the virus would be a problem, praising China for its handling of it and predicting a miracle that would cause it to disappear.

And the fact that the administration is mounting a political campaign-style attack one of its own senior officials, who has been one of the nation’s most respected public health experts for decades, tells an extraordinary tale about its priorities in the pandemic.

Trump’s fixation on his electoral prospects and desire to ignite an economic comeback were behind his assurances that it was safe to ease stay-at-home orders without waiting for infection curves to properly flatten. The push was eagerly embraced by some GOP governors, including Florida Gov. Ron DeSantis, who is now facing heavy criticism as his state sees runaway infection rates.

The alarming acceleration of the pandemic, with average countrywide new cases hitting 60,000 a day, suggests that the dark days endured by New York and New Jersey months ago may not turn out to be America’s most harrowing tussle with the virus.

New reports are emerging of full intensive care units, a shortage of protective equipment for front-line medical workers and problems with an underpowered national testing system — exactly the deficiencies that complicated the early fight against Covid-19.

Trump’s earlier impatience may come back to bite him less than four months from Election Day. Some governors and city mayors are slowing or reversing reopenings. Economic and social damage from the pandemic could therefore last far longer than originally hoped as news of job losses in recent days indicates that furloughs could turn into permanent unemployment for thousands of Americans.

View Trump and Biden head-to-head polling
But far from learning the lessons of previous missteps, the White House, which only just got Trump to wear a mask, is pressing on with its fast reopening strategy, minimizing the human toll, ignoring science and acting to protect Trump’s political flank in a way that continues to threaten the health of Americans. It’s an approach exemplified by the White House push to reopen schools by using the same aggressive tactics that consigned the south to its current plight and that Trump himself displayed when traveling to Florida on Friday — while largely ignoring the record-breaking infection rates.

Every parent in America is fretting that kids could be out of school for many more months, a scenario that would have grave educational, social and economic consequences.

DeVos played on those concerns in demanding a full opening of schools on CNN’s “State of the Union” on Sunday. But she failed on multiple occasions to outline a plan for how to keep children and teachers safe and to stop them from transmitting coronavirus to their elders. She also refused to say whether schools should follow US Centers for Disease Control and Prevention guidelines trashed by Trump in a step that deepened confusion surrounding the new school year and made clear school districts were on their own.

“The rule should be that kids go back to school this fall. And where there are little flare-ups or hot spots, that can be dealt with on a school-by-school or a case-by-case basis,” DeVos told CNN’s Dana Bash, minimizing the scale of the world’s worst single-nation coronavirus outbreak.

DeSantis has eagerly seized upon the White House pushes to open schools come what may, saying last week that if fast food and Walmart and Home Depot can open, schools can too, as Trump’s allies buy into his efforts to create a politically helpful but false narrative of normalcy.
Many school districts have been working on plans for months. They are finding that most schools simply lack the space to have all students back at the same time and ensure adequate social distancing. Scott Brabrand, the superintendent of schools in Fairfax County, Virginia, told CNN’s Dana Bash that he would need an additional five Pentagon’s worth of space to accommodate all students under such conditions. This kind of issue, to which the administration has offered no answers, is why some physicians view the White House’s calls for full classrooms within weeks as a fantasy.

“It’s definitely not safe to open schools until we get the caseloads to a decent level. That’s not going to happen any time soon,” said Dr. Uché Blackstock, associate professor in the Department of Emergency Medicine at NYU School of Medicine, on CNN’s “New Day” on Sunday.

Trump, meanwhile, was basking in lionizing praise from campaign advisers for allowing himself to appear on camera wearing a mask for the first time after months discrediting calls by medical experts on face-coverings while more than 135,000 Americans died and more than 3 million were infected by the virus.

The White House’s tendency to cast blame spilled over in a tirade by one of the President’s top trade advisers, Peter Navarro, on Sunday.

“We were cruising along, until the Chinese Communist Party basically hit us with that deadly virus, that weaponized virus. And I don’t think it’s any coincidence that the first year that China had a down economy was the same year now that they’re coming after us in all sorts of ways,” Navarro said on Fox News.

“And Joe Biden is the candidate of the Chinese Communist Party.”

Biden’s campaign, meanwhile, blasted Trump’s late adoption of the mask during a visit to wounded service members on Saturday by saying he “wasted four months that Americans have been making sacrifices by stoking divisions and actively discouraging people from taking a very basic step to protect each other. By contrast, Joe Biden has led by example from the start.”

Florida, which is supposed to host the Republican National Convention next month, reported 15,299 new Covid cases on Sunday, with a test positivity rate of 19.6%. Florida Rep. Donna Shalala, a freshman Democrat and former secretary of Health and Human Services under President Bill Clinton, said the virus was out of control partly because the governor, a Trump ally, would not tell everyone to wear masks, adding, “This is an American tragedy,” in an interview with CNN.

Around 40 hospitals across Florida have no ICU beds available with more than 7,000 people in hospitals statewide with Covid-19.

Another state that is suffering is Georgia, where Republican Gov. Brian Kemp even angered Trump with the speed of his state openings. Atlanta Mayor Keisha Lance Bottoms on Friday rolled back the city’s reopening to Phase One because of an alarming rise in new infections, accusing Kemp of opening the state in a “reckless manner.”

Charts of Georgia’s progression rates show earlier sacrifices amid stay-at-home orders have been squandered. New cases were flat through May and half of June until the curve of infections started to rise sharply. Texas, which also pushed a quick return to business, and reported its own single one-day high in infections on Saturday of 10,351 added another 8,196 cases on Sunday.

These concerning numbers explain growing pessimism about the surprisingly strong jobs and economic rebound in the US in recent weeks — a reality that will dismay Trump, who bought into claims by son-in-law Jared Kushner that the economy could be “rocking” by mid-July well before the election.