‘Democracy plain and simple’: How the 2020 election defied fraud claims and pandemic fears 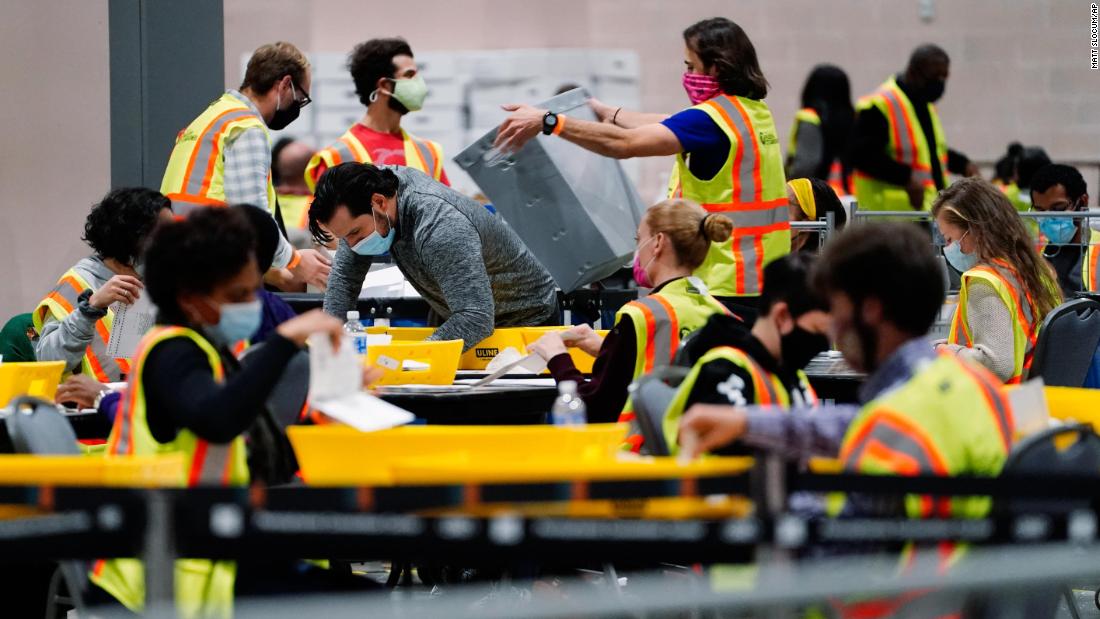 While Americans are still waiting for results as a handful of key states work through their backlogs, it’s not the first time it’s taken days to get to a result — and the multi-day process of counting votes in battleground states like Pennsylvania was fully expected, with state officials there predicting ahead of Election Day they wouldn’t get a result until the end of the week.

The pandemic changed the system

The reality is simply that many states changed their laws to make it easier to cast absentee ballots in the wake of the Covid-19 pandemic, and Americans used mail-in ballots in record numbers in the 2020 election — all of which take longer to tally. And as a result of Trump’s attacks on vote-by-mail, absentee voters were overwhelmingly Democratic. And because of the laws in several swing states, including Pennsylvania, those votes were counted last.

“Given the tremendous pressure of the pandemic and an election than many voters viewed as existential, election administrators overall did a superb job conducting the election and counting the ballots,” said Rick Hasen, an election law expert at the University of California, Irvine, and a CNN analyst. “Without their professionalism, Trump’s unsupported allegations of voter fraud would be accepted by more people, because administrative error often looks like cheating to those on the losing end of an election.”

There are expected to be recounts in two states, Wisconsin and Georgia. The Trump campaign has filed lawsuits in multiple states over the election and the counting of ballots. But some cases have already been dismissed, and several were litigating process issues, like in Pennsylvania over the distance election watchers could be from poll workers — not, as some Trump allies claimed, about whether observers were present at all.

“While some, including the President, continue to spew baseless claims of fraud … what we have seen here in Philadelphia is democracy plain and simple,” Philadelphia Mayor Jim Kenney, a Democrat, said at a press conference Friday.

A day after spewing false claims about election fraud, Trump issued a statement Friday calling for “full transparency into all vote counting and election certification.”

“We will pursue this process through every aspect of the law to guarantee the American people have confidence in our government,” Trump said.

The Trump campaign’s lawsuits, however, are unlikely to affect any results, with Biden holding leads in the thousands or tens of thousands in enough states to win the White House.

One of the Trump lawsuits that could affect the ballot count is over the legality of ballots that were postmarked by Election Day but arrived up to three days after in Pennsylvania. Republicans are challenging the late-arriving ballots in the US Supreme Court.

Pennsylvania Secretary of State Kathy Boockvar, a Democrat, told CNN’s Jake Tapper Thursday there were only a small number of those ballots, and they would not be nearly enough to sway the election. She’s said those ballots have been segregated and have not yet been counted. State estimates say there are a little more than 10,000 of these ballots–not enough to put into play Biden’s win in the state.

Other lawsuits have been unsuccessful so far, as the Trump campaign has failed to provide evidence of fraud.

In Pennsylvania, the Trump campaign sued claiming they were being unfairly blocked from observing ballot canvassing in Philadelphia. But the federal judge, Paul Diamond, his patience clearly tried with the legal complaint, confirmed the GOP observers were allowed to watch.

When the judge pressed the Trump campaign lawyer, Jerome Marcus, if there were observers in the room from the campaign, Marcus, said, “There’s a non-zero number of people in the room.”

A judge in Michigan dismissed a suit brought by the Trump campaign regarding canvassing observation.

Judge Cynthia Stephens said in a written order Friday that while one plaintiff alleged he was excluded from watching the ballot counting, “the complaint does not specify when, where, or by whom plaintiff was excluded. Nor does the complaint provide any details about why the alleged exclusion occurred.”

On Thursday, CNN reported Stephens had dismissed the case from the bench during a virtual hearing, exasperated at the lack of admissible evidence and the fact that the plaintiffs sued the wrong party.

Some of the other lawsuits are openly embracing — or promoting — conspiracy theories. After a false claim that Sharpies could invalidate ballots in Maricopa County went viral this week, the Trump campaign got involved in a suit over the use of Sharpie pens in Maricopa County ballots.

The Arizona secretary of state has filed an amicus brief, urging the judge to block the Trump campaign’s “transparent effort to upend the orderly completion of this election.”

“It is unheard of in cases such as these for Plaintiffs to seek broad discovery, especially when the requested discovery is not tied to actual facts. The Court should not permit Plaintiffs to now conduct a fishing expedition and prolong the litigation in a transparent effort to upend the orderly completion of this election,” a lawyer for Secretary of State Katie Hobbs, a Democrat, wrote in a court filing.

In at least two states, the Trump campaign has signaled it will pursue a recount: Wisconsin and Georgia.

In Wisconsin, Biden’s lead is roughly 20,000 votes, while in Georgia, where votes are still being counted, Biden has a slim lead of just over 4,000 votes.

Wisconsin State Assembly Speaker Robin Vos, a Republican, directed an Assembly committee on Friday to investigate the administration of the election, singling out the Democratic stronghold of Milwaukee.

Georgia Gov. Brian Kemp, a Republican, sent an email to his campaign mailing list on Friday seeking attorneys in a number of counties. “Election Day has passed but the fight is far from over. There are ballots left to be counted and we must protect the integrity of Georgia elections,” Kemp wrote.

‘We could have had this done’

Ahead of the election, Democrats and election experts had warned that a “red mirage” would occur on election night, making it appear as through Trump was initially winning because day-of vote would be tallied first and would favor Trump. But then as mail-in ballots were tallied, the numbers would shift back toward Biden.

That’s the scenario that played out in the states that Biden flipped to win the White House. On election night, Trump was leading in Michigan, Wisconsin and Pennsylvania, but all of those leads evaporated.

In Wisconsin, for instance the Democratic stronghold of Milwaukee didn’t upload any of its mail-in vote until early Wednesday morning. Once those numbers were reported, Biden took a lead that he never relinquished. Biden easily won Michigan by nearly 150,000 votes, but he was trailing on Tuesday evening.

Trump’s allies have tried to claim the large swings toward Biden suggest fraud. But in states that could process their absentee ballots well before Election Day, meaning they were counted first, the opposite effect occurred.

On Tuesday evening, Biden jumped out to a lead in Ohio, reflecting his advantage in absentee ballots. Despite the quick predictions that he might win the state, the day-of vote swung the state solidly back to Trump, and he won the state by more than 450,000 votes.

It was the mirror image of the states Trump is now protesting over.

Election officials in states where absentee ballots couldn’t be processed until Election Day or just beforehand — Pennsylvania, Wisconsin and Michigan — said that the counting delays were preventable if the GOP-led state legislatures had changed state laws to process absentee ballots earlier, as other states had done.

“We were not permitted to begin this process until election day. That should change,” Allegheny County Executive Rich Fitzgerald, a Democrat, told CNN’s Brian Todd. “We could have had this done and given results on Tuesday night. We didn’t have to go through this three-to-four day process if we were allowed to pre-canvass. So I hope our state legislature changes that.”