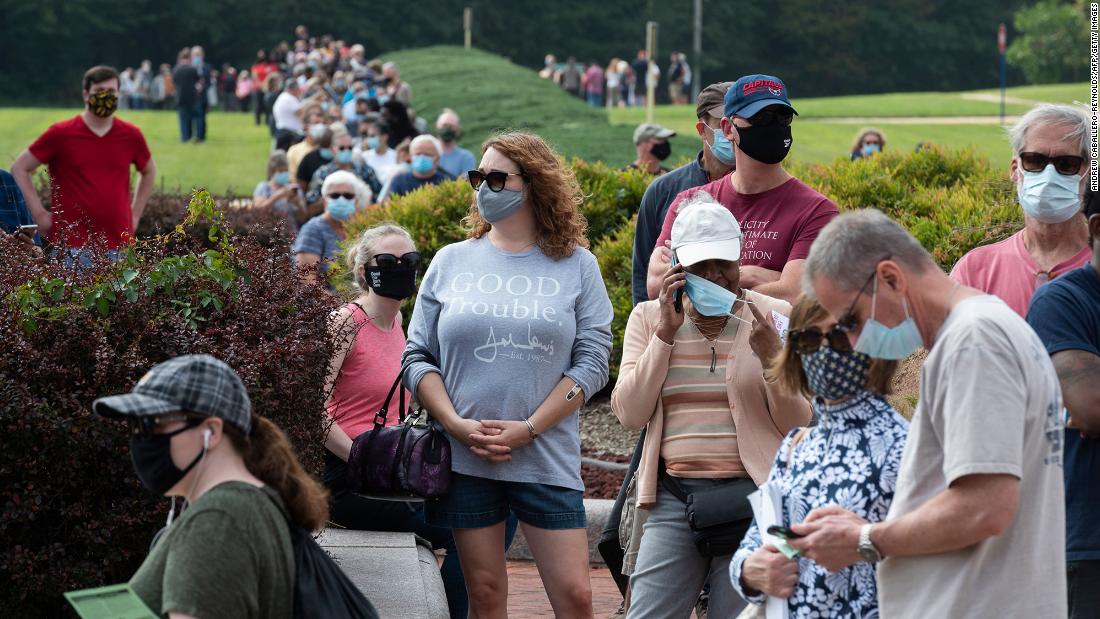 Heavy turnout at early voting centers in Georgia and Texas comes as many voters elsewhere take advantage of mail-in ballots, defying President Donald Trump’s misleading attempts to cast the election as the most corrupt in history. Another of the President’s many misinformation efforts — his claim that the Obama administration spied on his team — suffered a serious blow on Tuesday when it emerged in a Washington Post report that a Justice Department probe into one key aspect of the conspiracy theory will end without even a public report.

Inspirational scenes of eager voters, in some cases in Georgia waiting eight hours to exercise their democratic rights, reflected enthusiasm on both sides at a raw moment in US history at the tail-end of a tumultuous presidential term.

Voters are facing the most difficult circumstances imaginable given the health emergency. Confidence in the election is also being challenged by court battles in a handful of states arising from apparent GOP efforts to complicate early balloting that Democratic voters prefer. There are also infrastructure problems — for example the registration portal in Virginia crashed on Tuesday on the last day when citizens can sign up to vote.
Trump and Democratic presidential nominee Joe Biden mostly concentrated Tuesday on winning votes rather than on how they will be counted.
The President corralled another large crowd in defiance of his own government’s social distancing recommendations as the pandemic takes a dark turn. He is now promising multiple rallies per day — potentially risking the health of his supporters and making it likely they will spread Covid-19 into their communities as the predicted fall spike in infections takes hold.

Trump’s trip to Pennsylvania Tuesday highlighted the state’s potential role as a kingmaker on November 3 and forthcoming rallies in Iowa, North Carolina and Georgia show he’s playing defense across swathes of territory he won in 2016.

Trump made a clumsy attempt to repair his support with women and suburban voters in Johnstown, a gritty Keystone State coal town where he ran strongly four years ago and which is receptive to his populist economic message and claims Democrats like Biden are to blame for an exodus of jobs.

“Suburban women, will you please like me? Please. I saved your damn neighborhood. OK?” Trump said, referring to his claims that Democrats would allow outsiders — i.e. people of color — to invade suburban areas.

The President’s event as usual featured few masks, little social distancing and open defiance of the reality of the pandemic. His decision to crank up the pace of rallies also dismayed public health experts, after the government’s top infectious diseases specialist Dr. Anthony Fauci warned on Monday that packed political rallies were “asking for trouble.”

“(This is) even beyond asking for trouble. It is very self-destructive and actually very destructive behavior,” said Dr. Peter Hotez, dean of Baylor College of Medicine’s National School of Tropical Medicine.

“Ideally, you don’t hold in-person events at this point. The numbers are going up, they are going up pretty precipitously,” Hotez told CNN’s Jake Tapper.

Biden: The only senior Trump cares about is himself

Biden followed Trump’s footsteps from the day before in Florida, another potential pivot state, seeking to accelerate the President’s ebbing support among seniors and to bash him over Covid-19.

“To Donald Trump, you’re expendable. You’re forgettable. You’re virtually nobody,” Biden told seniors in Pembroke Pines, trying to capitalize on polling that has shown him with a double digit lead among a crucial demographic that votes in reliably heavy numbers.

And later Tuesday night, in a move that certainly won’t help the President improve his standing with senior citizens, Trump suggested in a tweet that Biden be admitted to a nursing home.

“People are scared. People are scared of what will happen if the Affordable Care Act is destroyed in the middle of a pandemic,” Harris told Barrett, hitting another election talking point by warning the judge could also help the Court overturn Roe v. Wade, which enshrined the right to an abortion.

Democrats have little chance to stop Republicans ramming the nomination, which will enshrine a 6-3 conservative majority on the Court, through the Senate before the election. But they are using the hearings to drive home their messages that health care is not safe in Trump’s hands.

View Trump and Biden head-to-head polling
With 20 days to go before the election, Biden leads CNN’s national Poll of Polls by 11 percentage points. He is also ahead in most swing states, leaving the President seeking a last-minute comeback.

Both parties have been trying to convince voters to cast ballots early, given that crowds at polling places on Election Day could pose a serious health threat given the extraordinary circumstances shaping this election.

In Georgia, a traditionally red state in which Biden is making a strong push, some voters lined up for up to eight hours on the first day of early voting on Monday. A total of 126,000 early votes were cast on Monday alone. Long lines were not the only annoyance, however. Technical problems slowed voting at one super site in Atlanta, heightening tensions in a state blighted by accusations of attempts to make it difficult for voters, especially African Americans, to vote.

More than 10.5 million Americans have already voted in the general election, according to an analysis of voting information in 41 states from CNN, Edison Research and Catalist. And more than six million of those ballots come from the 16 states rated most competitive by CNN this cycle. In 2016, some 130 million Americans voted in the election, and turnout is expected to be high this time around. Polling shows that Democrats prefer to vote early or by mail and Republicans, perhaps partly owing to Trump’s incessant assaults on mail-in voting, are more likely to vote in a traditional manner on Election Day.
Build your own road to 270 electoral votes with CNN’s interactive map

The circumstances of this election are unique, given the public health emergency that has already killed more than 215,000 Americans. But the new habits that Americans are making in how they vote could outlast the pandemic.

At the same time political acrimony is also building over a series of apparent attempts by Trump’s campaign and Republicans to complicate an early voting process favored by Democrats. An appeals court ruling in Texas on Monday night upheld GOP Gov. Greg Abbott’s directive allowing only one ballot drop box location per county. The move leaves Harris County, with a population of 4.7 million, massively underserved. It also means some Texans face long car rides to drop off ballots. California officials meanwhile tried to force Republicans to remove unofficial drop boxes that they say do not benefit from the security and chain of custody required for official drop boxes.
In Pennsylvania, a judge over the weekend denied an effort by the Trump campaign and the Republican Party to make ballot drop boxes in the commonwealth unconstitutional. The entire Virginia voter registration system crashed Tuesday on the last day to register. A coalition of voting rights groups has filed a lawsuit seeking to extend Virginia’s deadline for 48 hours and there will be a motions hearing on it Wednesday morning. And a federal judge has rejected Florida’s bid to extend its own over registration deadline.

The wrangles over voting in these and other states threaten to play into the President’s attempts to cast doubt on the probity of an election that he appears to be in danger of losing and which he may challenge in court if he loses after refusing to guarantee a peaceful transfer of power.