Dive Bars Bring in the Light 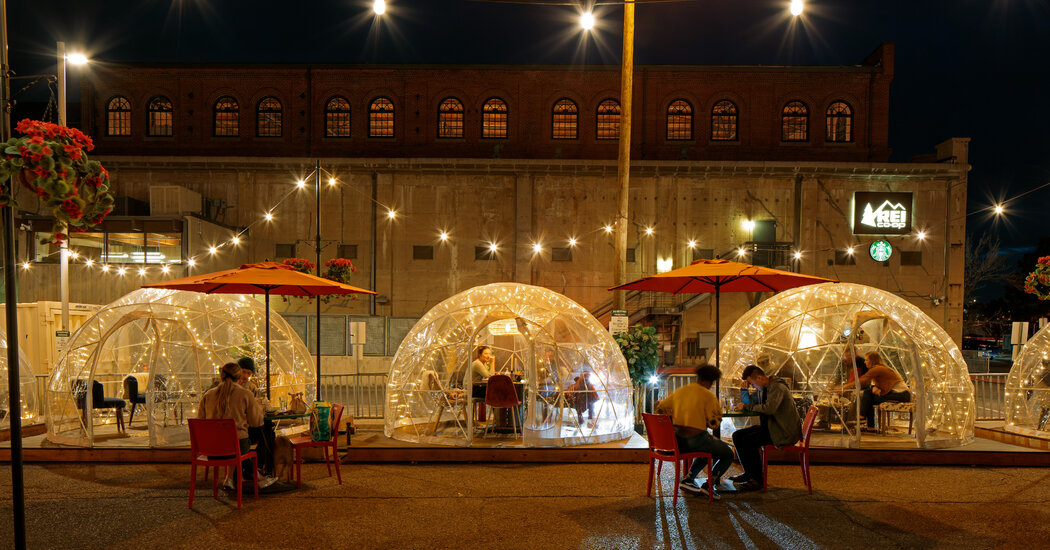 Two gloves, a dustpan, a onetime-use broom and some cleaning solution: In Chicago, that’s what the Health Department refers to as a vomit and diarrhea cleanup kit. And until a loathsome regular named Covid sidled up to the bar, Scott Martin, the owner of Simon’s, a beloved Scandinavian dive in the Windy City’s northern reaches, thought a vomit and diarrhea cleanup kit was the most extravagant thing he was required to have on hand in order to keep his very old watering hole in the government’s good graces.

Suffice to say, he no longer feels that way.

While “dive bar” is mostly a term of endearment these days, even the upper echelon of such dark, dank drinking establishments has never been regarded as particularly preoccupied with sparkling tabletops.

Dive bars are lived in, died in, rode hard and put away wet in, laughed and cried in a stranger’s arms in, at once fully yourself and completely anonymous in. They’re where folks go to drink, to lie, to love, to sigh, to put Keith Sweat on the jukebox and have no one ask why.

Before the pandemic, dive bars were an endangered species in many cities, what with skyrocketing rents and the attendant hoity-toity-ness of pencil-panted transplants. And some people assumed that the coronavirus would make all the great dives descend into dirt.

Yet if you think you know that, you don’t know dives. All around America, they’re trying to survive — by letting the light in (or out), for a change.

At Simon’s, Mr. Martin moved some of his bar stools into the parking lot and set them up at high-top tables. But that was summer; autumn’s now. He hopes to continue to attract patrons by setting up a large tent with propane heat lamps and fleece blankets, but his real cold-weather draw is glogg, a traditional Swedish concoction that contains red wine, cinnamon, sugar, cloves, oranges, ginger, raisins and bourbon or vodka (take your pick).

“You can stay outside and drink glogg and stay fairly comfortable — until you’ve had too many gloggs and then you’re freezing,” said Mr. Martin, who rang in his 60th birthday by wrestling with a bar patron who repeatedly refused to wear a mask.

While Simon’s was, until recently, able to offer limited seating indoors in addition to its evolving outdoor space, such a plan simply wasn’t feasible for My Brother’s Bar, which, at 167 years of age, is Denver’s oldest continuously operating house of libation.

“The building is extremely old with zero ventilation,” said Danny Newman, the owner, adding that his “summer solution” — picnic tables in the parking lot — ”was great.” But now that it’s gotten chillier, Mr. Newman has set up plastic igloos, equipped with heaters and exhaust fans, for single-party groups of up to six people.

At first there wasn’t a cap on how much time patrons could spend in the igloos, but after a handful of six-hour hang sessions made it apparent that some imbibers planned to use them as second homes, Mr. Newman instituted a 90-minute limit.

Mr. Newman added that a nearby restaurant has transformed tiny greenhouses into two-tops so customers can eat outdoors without being bombarded by the elements. Lest anyone wonder whether Colorado’s robust legal marijuana industry has something to do with the ready availability of see-through structures reminiscent of grow houses, Mr. Newman said it was.

One of the oldest bars in Seattle, the 5 Point — slogan: “Alcoholics serving alcoholics since 1929” — has also constructed a cozy, heated outdoor area for its patrons. But now that the wind and rain are whipping around, owner David Meinert doesn’t expect the allure to last long. That’s why he recently upgraded his heating, venting and air-conditioning system with Minimum Efficiency Reporting Value (MERV) filters to improve air circulation.

With the help of Dr. Bruce Davidson, a pulmonary physician and the former president of the National Tuberculosis Controllers Association, he installed fans and UV-C lights — not to be confused with retina-singeing UV-A and UV-B lights — on the bar’s ceiling.

As Dr. Davidson, who became enamored of this specific type of ultraviolet light when he observed how effective it was in the tuberculosis wards of Philadelphia, explained, the fans suck the air that customers exhale straight toward the ceiling.

Should any of those customers unknowingly have the coronavirus, the UV-C lights stop it from spreading, protecting patrons and staff alike. (Such lights are also being used to as a safeguard against the coronavirus in hospitals, schools, restaurants and subway systems, including New York City’s.)

Yet for as confident as Dr. Davidson is in UV-C lighting’s ability to slay the coronavirus, he remains a staunch advocate of mask wearing as a means of “source control.” It just so happens Seattle has an indoor mask mandate, something Mr. Meinert’s employees aren’t shy about enforcing.

“One of the good things about the 5 Point is people have always gotten thrown out of here,” he said. “We’re not like, ‘The customer’s always right.’”