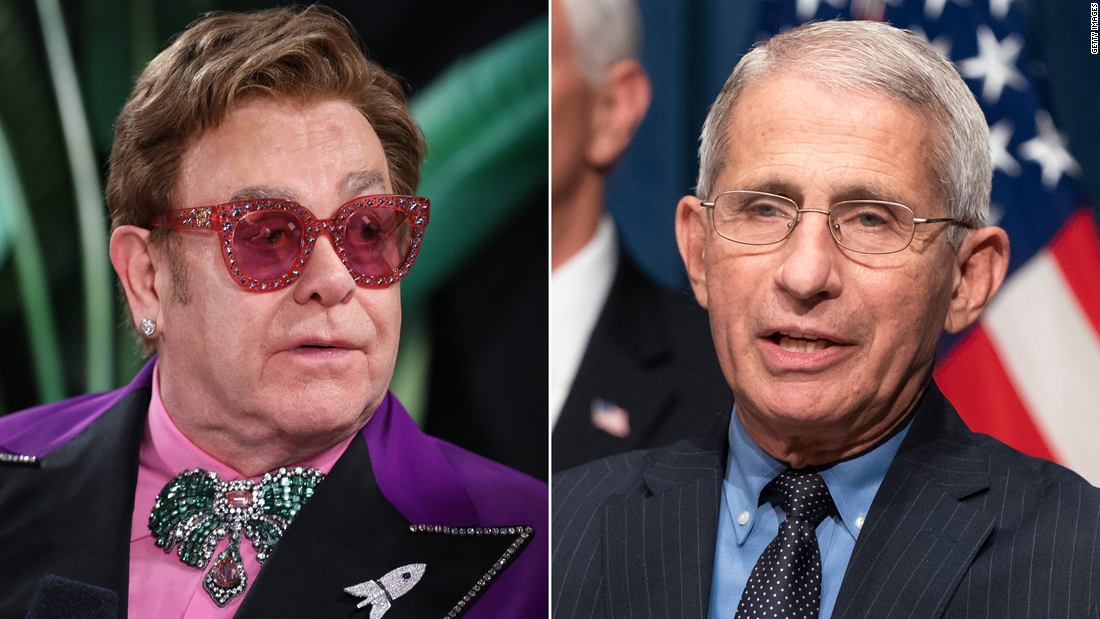 “What a wonderful and fitting way to mark World AIDS Day, by honoring one of the biggest champions in the history of the AIDS epidemic,” John said in remarks at the US Global Leadership Coalition‘s virtual tribute celebration, where Fauci was presented with the organization’s Lifetime Achievement Award.

“There are very few people on this planet who have dedicated themselves to a lifetime of service to save millions of lives like Dr. Fauci,” said the global music superstar, who founded an eponymous foundation that works to combat HIV/AIDS and its stigma.

“His unwavering commitment to public health and innovation has transformed the approach to HIV,” John said. “And it is his leadership and persistence that will ultimately help us overcome the Covid-19 pandemic.”

Fauci faced protests and condemnation from activists in organizations like the AIDS Coalition to Unleash Power, also known as ACT UP, for his handling of the deadly disease as it claimed more than 100,000 lives in the United States. However, he would go on to collaborate with activists on research and drug trial development.

In a conversation with former first daughter Barbara Bush that was shown at the Tuesday night event, Fauci recalled, in the initial years of the AIDS epidemic in the early 1980s, “putting Band-Aids on hemorrhages with no drugs available, watching literally all of my patients die.” He called it “one of the darkest periods of (his) life.”

“It’s something that just stuck with me, of how that feels when you have people that you want to save that you can’t,” he said.

After the development of drugs to treat the disease, Fauci said, he noticed a “stunning and painful” disparity between the US and Africa on HIV/AIDS. He helped create the President’s Emergency Plan for AIDS Relief, a program started in 2003 under President George W. Bush to help save the lives of those with HIV/AIDS in the developing world.

“The impact is extraordinary and it’s the gift that keeps giving,” Fauci said. “It created a system that you can actually deliver the kind of care, prevention and treatment in a region and in a system that most people blew off as being impossible.”

Fauci credited the longevity of the program, which continues to this day, to bipartisanship.

“The lessons learned — and boy, do we need to know it now in today’s world — is that if you’re going to get anything done, divisiveness doesn’t work. You’ve got to bring people together,” Fauci said. “And I hope as we look forward in the future that that’s what we’re going to start seeing now, because we’ve got to get back to that spirit of bipartisan approach.”

The US Global Leadership Coalition’s president and CEO, Liz Schrayer, echoed that World AIDS Day was an important moment “to reflect on what America coming together in a bipartisan manner can actually do” and said it was “an extraordinary honor” for the coalition to recognize Fauci with the Lifetime Achievement Award.

“It was just natural for us to bring these two issues together: World AIDS Day and a celebration of America making a difference in the world,” she said.

Asked if he believed he would see an AIDS-free generation in his lifetime, Fauci expressed optimism but said work to combat the deadly disease must persist.

This story has been updated with remarks from Liz Schrayer, president and CEO of the US Global Leadership Coalition.