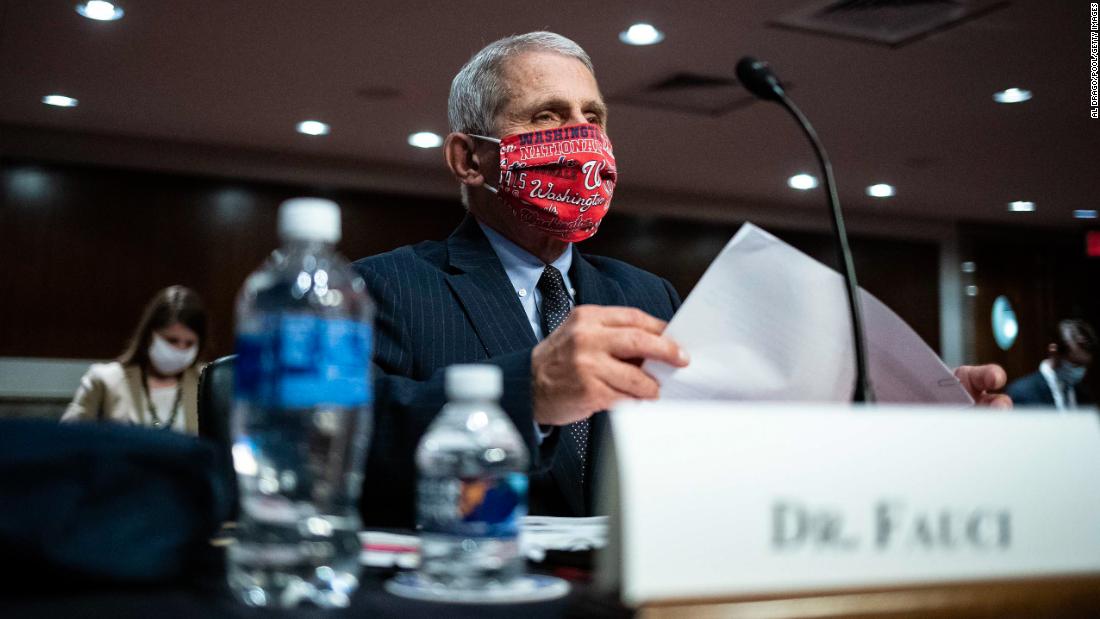 “It’s a false narrative to take comfort in a lower rate of death,” Fauci said during a live stream press conference with Sen. Doug Jones of Alabama, a Democrat.

“There’s so many other things that are very dangerous and bad about this virus, don’t get yourself into false complacency.”

Trump tweeted Monday that “the Mortality Rate for the China Virus in the U.S. is just about the LOWEST IN THE WORLD,” doubling down on this stance with a subsequent tweet definitively declaring that “we now have the lowest Fatality (Mortality) Rate in the World.”

In reality, while US coronavirus mortality rates have declined recently, they are not the lowest in the world.

Data on coronavirus death rates remain imprecise, due in part to limited testing availability and the prevalence of mild or asymptomatic cases that often go unrecorded. Still, among the 20 countries most affected by the virus, at least 14 have lower death rates than the US.

Fauci also said Tuesday he does not anticipate a federal coronavirus vaccine mandate in the US once one is made available.

“I don’t think we’ve ever had a situation where you mandated for the general population,” he said.

Fauci explained he “could see individual institutions mandating a vaccine” but not at the nationwide level “merely because of all the situations you have encroaching upon a person’s freedom to make their own choice of their own health.”

Scientists around the world are racing to develop a Covid-19 vaccine, with some top health officials predicting that the US could be on track to have one by the end of the year. In preparation for that, Fauci told CNN last month the vaccine education effort in the US is “not going to be easy.”

“There is a general anti-science, anti-authority, anti-vaccine feeling among some people in this country — an alarmingly large percentage of people, relatively speaking,” he said.

Fauci assessed that given the power of the anti-vaccine movement, “we have a lot of work to do” to educate people on the truth about vaccines.

“It’s not going to be easy,” he warned. “Anyone (who) thinks it will be easy is not facing reality. It’s going to be very difficult.”

Fauci added that the government has a vaccine education program to counteract anti-vaccine messages.

“We have a program right now that’s going to be extensive in reaching out to the community,” he noted. “They may not like a government person in a suit like me telling them, even though I will tell them. They really need to see people that they can relate to in the community — sports figures, community heroes, people that they look up to.”

But there’s no indication that such a program is in place.

In the meantime, Fauci stressed the importance of face masks in combating the virus — something he said he’s “strongly in favor” of mandating, just not on the federal level.

“I don’t like to be authoritarian, from the federal government. But at the local level, if governors and others essentially mandate the use of masks when you have an outbreak, I think that would be very important,” Fauci said.

White House officials are discussing taking a more active role in encouraging masks as they shift to a strategy of preparing Americans to live long-term with the virus.

After appearing at a string of events without social distancing and where masks were scarce, Trump’s campaign said Sunday it would host a New Hampshire campaign rally where attendees will be “provided a face mask that they are strongly encouraged to wear.”