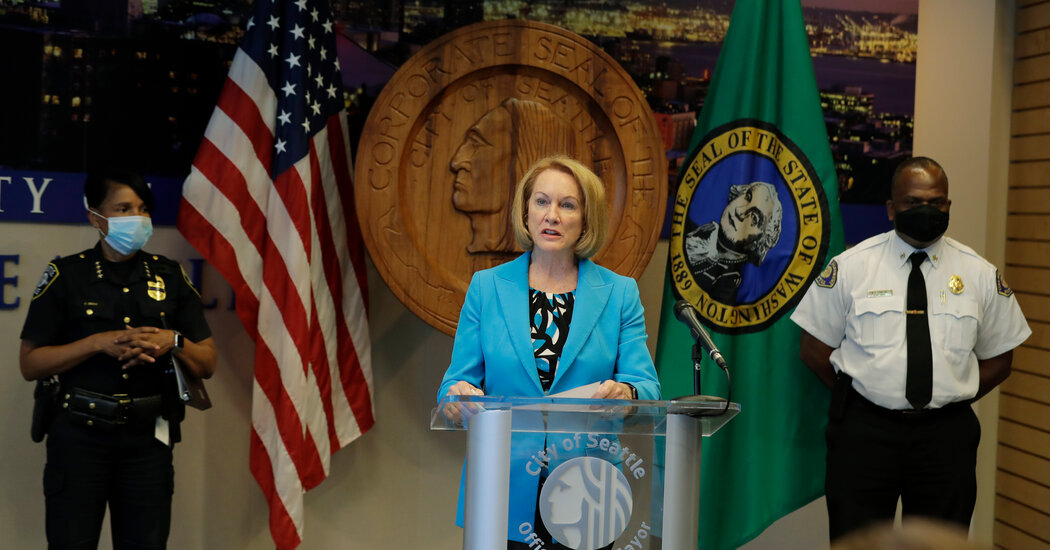 The Trump administration, which has pledged to use the full force of the government to protect federal property, expanded that effort on Thursday by sending a team of tactical border officers to stand by for duty in Seattle.

The Special Response Team being deployed is similar to the tactical teams currently operating in Portland, Ore., where local officials have vehemently objected to their efforts to subdue street protests. Seattle officials have also said they do not want federal agents sent to target protesters.

Agents from the Special Response Team, operated under U.S. Customs and Border Protection, are typically deployed for intense law enforcement operations, similar to the agency’s BORTAC group that has operated in Portland.

“The C.B.P. team will be on standby in the area, should they be required,” the Federal Protective Service said in a statement about the Seattle effort.

A spokesman for the agency, who requested anonymity to speak about the operation, said the border officers were sent to back up the Federal Protective Service officers charged with protecting federal buildings, and would only be used if protests expected this weekend escalate out of control.

The deployment to Seattle came on the same day that the inspector general of the Justice Department announced an investigation into tactics used by the federal agents in Portland and in front of Lafayette Square in Washington, D.C., in early June.

The inspector general of the Department of Homeland Security, Joseph V. Cuffari, is also conducting an inquiry into the tactics of the agents in Portland. Mr. Cuffari said in a letter to Democrats that he expected to examine the authority used to deploy agents to the city after President Trump signed an executive order directing federal agencies to increase security at monuments, statues and federal property.

The order prompted the Homeland Security Department to form teams that were briefly deployed to multiple cities to guard federal property, including Seattle, for the July 4 weekend. The tactical teams in Portland have remained at a federal courthouse as tension with protesters there has heightened.

Representative Bennie G. Thompson, a Democrat from Mississippi who chairs the House Committee on Homeland Security, said on Thursday that he would hold a hearing next week to examine the D.H.S. response to the protests.

“The administration’s actions are not only violent and clearly politically motivated, they are anathema to the rights guaranteed by the Constitution and a threat to every value for which our Republic stands,” Mr. Thompson said.

Seattle’s mayor, Jenny Durkan, said in an interview that she spoke earlier Thursday with Chad F. Wolf, the acting secretary of homeland security. She said he had assured her that the administration had no plans to deploy a surge of agents to Seattle and would not do so without communicating with the city. She had not been alerted to plans to position the tactical team, but said that the department may be distinguishing between an active deployment and agents who are on standby.

Ms. Durkan said she made it clear that the city did not need the help of federal agents.

“Any deployment here would, in my view, undermine public safety,” Ms. Durkan said.

Protests in the Seattle area have quieted somewhat since police this month cleared the so-called Capitol Hill Organized Protest zone, where demonstrators had laid claim to several city blocks. But there have been signs that demonstrations may be ramping back up, including on Thursday, when the police said a group of protesters broke windows and lit fires in the Capitol Hill neighborhood.

Alexei Woltornist, a spokesman for the Department of Homeland Security, said in a statement that the expected presence in Seattle would be smaller than that in Portland.

The Federal Protective Service said it routinely requested assistance from other law enforcement agencies when there are threats to federal properties.

Teams of federal agents from several agencies have been operating in Portland for much of July, drawing outrage from city officials, including Mayor Ted Wheeler. The mayor, who was hit with tear gas from the federal officers on Wednesday night, said the presence of the agents had only inflamed tensions in a city that was working to calm them.

The number of protesters in Portland has swollen in recent days into the thousands, drawing out people who had not joined the protests earlier but who were appalled that federal forces would be operating in the city with such aggressive tactics. Some in the demonstrations have targeted federal agents with lasers and frozen water bottles, and others set fire to a police union building.

The agents have repeatedly fired tear gas and various kinds of crowd-control munitions, leaving at least one protester bloodied. Videos have shown federal agents seizing protesters and guiding them into unmarked vans.