Ginsburg Says Her Cancer Has Returned, but She’s ‘Fully Able’ to Remain on Court 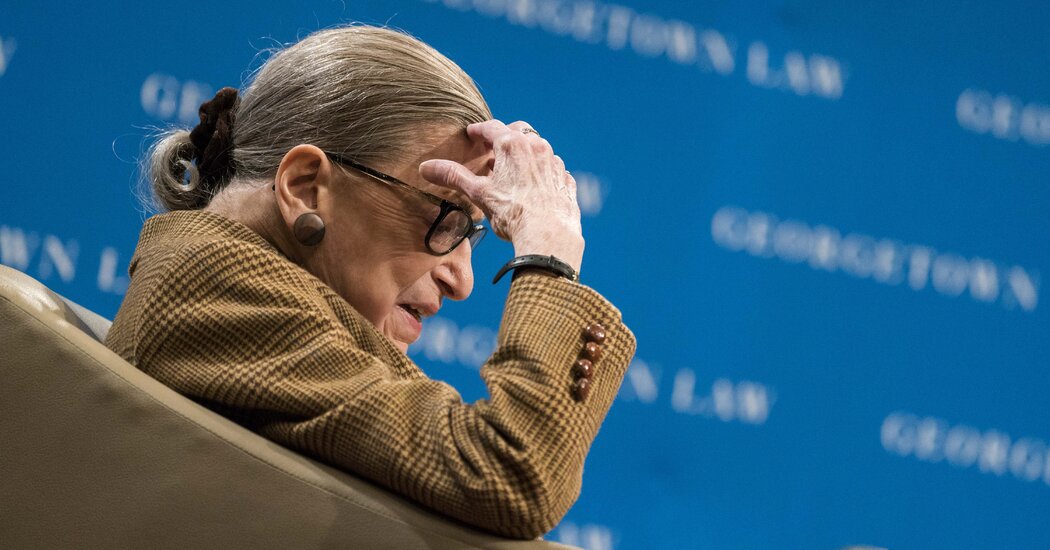 Justice Ruth Bader Ginsburg, the most prominent member of the Supreme Court’s liberal minority, said Friday that she has had a recurrence of cancer, causing a wave of anxiety among Democrats that was not completely assuaged by her assurance that she was undergoing chemotherapy, with “positive results,” and would remain on the Supreme Court.

At 87, Justice Ginsburg is the court’s oldest justice and, as “Notorious R.B.G.,” its most celebrated. Her health has been the subject of intense interest to both parties since the election of President Trump, but particularly to Democrats. They fear that if she died or had to resign, Mr. Trump and his Republican allies in the Senate, led by Mitch McConnell of Kentucky, the majority leader, would quickly try to install a conservative successor even as the November election is imminent.

For Democrats increasingly optimistic about defeating Mr. Trump and possibly retaking the Senate, that would be an even more painful version of what Mr. McConnell and Senate Republicans were able to accomplish in 2016.

That year they prevented President Barack Obama’s Supreme Court nominee, Judge Merrick B. Garland, from even having a hearing on the grounds that with the presidential election approaching, the American people should decide who would hold the power to fill the spot.

But Mr. McConnell has made it clear that he would proceed with filling any vacancy this year, reasoning that two situations are different since the White House and the Senate are now both controlled by Republicans, not divided between Democrats and Republicans as they were in 2016. And because of changes to Senate rules and procedures governing confirmations, Democrats would ultimately be unable to thwart a confirmation if Republicans decided to proceed and remained united since a majority is all that is required.

Justice Ginsburg was typically optimistic in her statement. “I have often said I would remain a member of the court as long as I can do the job full steam,” she said. “I remain fully able to do that.”

She said that the lesions on her liver had been detected in February and had been reduced by the chemotherapy. “Satisfied that my treatment course is now clear,” she said “I am providing this information.”

She said she planned to continue biweekly chemotherapy sessions and maintain an active daily routine. “Throughout, I have kept up with opinion writing and all other court work,” she said.”

More recently, in May, Justice Ginsburg underwent a gallbladder procedure, participating in oral arguments from her room at Johns Hopkins Hospital in Baltimore.

And this week she was treated for a possible infection at the same hospital after experiencing chills and a fever, and she underwent an endoscopic procedure to clean out a bile duct stent that was placed last August. But the justice’s statement said her recent hospitalizations to remove gall stones and treat an infection were not related to the recurrence of cancer.

She was released from Johns Hopkins on Wednesday and was “home and doing well,” a Supreme Court spokeswoman said.

Justice Ginsburg has had both colon cancer and pancreatic cancer, and when cancer spreads to the liver from another organ, it is considered advanced. Usually, it cannot be cured, but treatment may shrink the tumors and help control the disease.

Justice Ginsburg did not say where the tumors in her liver are thought to have originated, but she did say her chemotherapy was called gemcitabine. That drug is generally used for pancreatic cancer, which is more difficult to treat than colon cancer.

Doctors not involved in her care said there were various ways to treat cancer that has spread to the liver.

“We’re pretty good at controlling it with chemotherapy and targeted therapy,” said Dr. Christopher George, a medical oncologist at Northwestern Medicine in Chicago.

Justice Ginsburg’s statement mentioned only chemotherapy, not targeted therapy. But targeted therapy — treatments that attack tumors with certain mutations — can help only 10 percent to 20 percent of patients with pancreatic cancer, Dr. George said.

Dr. Wasif M. Saif, a deputy physician in chief and medical director of the Northwell Health Cancer Institute in Lake Success, N.Y., said it was crucial for people receiving chemotherapy for advanced pancreatic cancer to also be treated for loss of appetite and digestive problems, to help keep up their strength and avoid weight loss.

“With supportive care, they do better,” he said.

Talk of Justice Ginsburg’s departure from the court is nothing new. During the Obama administration, some liberals urged Justice Ginsburg to step down so Mr. Obama could name her successor. She rejected the advice.

“I think it’s going to be another Democratic president,” Justice Ginsburg told The Washington Post in 2013. “The Democrats do fine in presidential elections; their problem is they can’t get out the vote in the midterm elections.”

Mr. Trump, whose election proved her wrong, has been particularly disparaging of Justice Ginsburg, saying in 2016 that “her mind is shot” and suggesting that she resign. His sharp words came after Justice Ginsburg criticized Mr. Trump in a series of interviews. She later said she had made a mistake in publicly commenting on a candidate and promised to be more “circumspect” in the future.

More recently, he urged Justices Ginsburg and Sonia Sotomayor to recuse themselves in all cases involving him. Meanwhile, he has cited his two Supreme Court appointments — Justices Neil M. Gorsuch and Brett M. Kavanaugh — as well as his lower court choices as signature achievements.

Both parties have hoped to energize their voters in November by emphasizing the stakes of the makeup of the Supreme Court, and their job has been made easier by the flurry of end-of-term decisions that drew new attention to the court. And now even the possibility of an imminent opening is likely to renew those efforts.

“As worrisome as this conservative court is for progressives right now, it can get a whole lot worse if Trump gets the chance to nominate another justice,” said Brian Fallon, the head of Demand Justice, a liberal group. “Justice Ginsburg’s resilience is utterly remarkable, but hoping for her continued good health is not a sufficient strategy for Democrats. We need to rally around the Supreme Court as an issue and win this election.”

Demand Justice, in concert with several other leading liberal groups, recently began a $2 million advertising campaign in key presidential election states trying to persuade voters that the direction of the court will be set for decades in the coming election.

Conservatives believe that narrow, 5-to-4 decisions favoring liberal positions on immigration and abortion would motivate those on the right to back the president in November in the hopes that he would get additional Supreme Court appointments to solidify the conservative bloc.

Mr. Trump, who was viewed as having benefited from a pending vacancy on the court in 2016, sought to stoke conservative fervor over the court last month as rulings went against him.

“These horrible & politically charged decisions coming out of the Supreme Court are shotgun blasts into the face of people that are proud to call themselves Republicans or Conservatives,’ he tweeted. “We need more Justices or we will lose our 2nd. Amendment & everything else. Vote Trump 2020!”