Good news on the vaccine front shows light at the end of the tunnel.’ For now, the Covid crisis is unabated 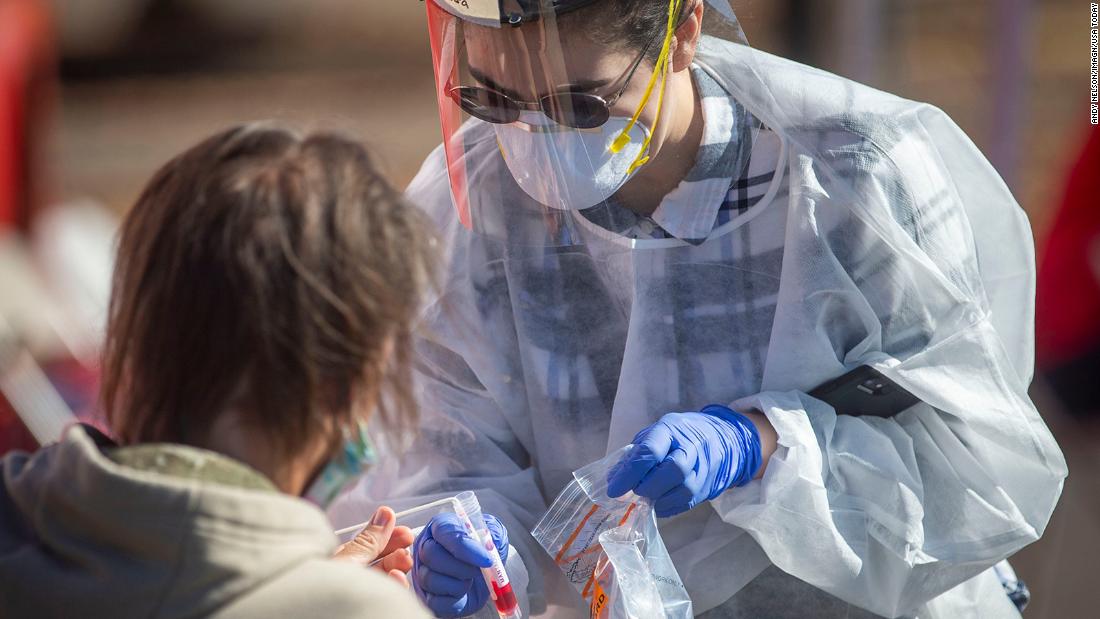 “There is light at the end of the tunnel,” Minnesota Gov. Tim Walz told reporters Monday of the vaccine news, a phrase echoed later in the day by Dr. Anthony Fauci, the director of the National Institute of Allergy and Infectious Diseases.

“But I want to be very clear. We need to get all our neighbors to the end of the tunnel,” said Walz.

That tunnel is going to be a long one.

Most Americans probably won’t get vaccinated until next year. And the fall surge continues to bring a terrifying jump in cases across the US: For the 11th day in a row, Illinois reported more than 10,000 cases in a single day, according to the state Department of Health website. Nationwide, for two straight weeks, the US has added more than 100,000 new cases daily.

Cases in California are up 51.3% in the past week and daily cases have doubled in just 10 days, Gov. Gavin Newsom said. About 70% of the counties in the state are moving back into more restrictive tiers as Newsom used the analogy of “pulling an emergency brake” to deal with the crisis.

As vaccination trials continue, tens of thousands of lives could either be saved or lost, depending on how people act. Traditional Thanksgiving gatherings, for example, are a huge concern among health experts and state leaders.

“We simply can’t do that right now,” Walz said as his state reported 24,000 new cases in just three days.

All of this comes as one expert says Covid-19 could become the leading daily cause of death in the US.

“It’s more than just heading in the wrong direction,” said Dr. Peter Hotez, dean of tropical medicine at the Baylor College of Medicine. “We are on the verge of a humanitarian catastrophe.”

Why the ‘war’ against Covid-19 is getting worse

Much of the current surge is fueled by people hanging out with friends or family who don’t live with them — and wrongfully assuming they’re not infected.
US Surgeon General Jerome Adams said all Americans must mask up and double down on safety precautions, including social distancing, as the next few months are expected to be the worst of the pandemic.
“Hard truths: 49/50 states with increasing cases, 34 in red or orange zones (ie significant rise),” Adams tweeted.

“Record cases over the past week will be record hospitalizations soon. Our/ YOUR communities and hospitals simply can not sustain high level care at this rate of increase.”

Many hospitals are already running out of health care staff. Major surgeries for non-Covid patients are getting delayed. And some patients are several hours away from the closest available ICU bed.

The winter surge of coronavirus cases could push some hospitals “to the breaking point,” said Dr. Dara Kass, an emergency medicine physician at Columbia University Medical Center in New York.

Kass said that some areas being hit hardest by the current surge are the least equipped to handle them.

“When you look at Utah, or Montana or the Dakotas, they just have such a fewer number of ICU beds and specialists, that when they get at capacity, it’s going to be a breaking point for them in a way it wasn’t for us in the coastal cities and states,” Kass said at an online event hosted by Stat.

Nationwide, more than 11 million people in the US have been infected with coronavirus, and more than 247,000 have died, according to data from Johns Hopkins University.
If 95% of Americans wore masks consistently, 68,000 lives could be saved by March 1, according to the University of Washington’s Institute for Health Metrics and Evaluation. If not, the death toll is expected to reach 439,000 by March 1.

Tootie Smith, who will start her term as chairwoman of the Clackamas Board of County Commissioners in January, said in a Facebook post that Brown’s order is wrong and her family “will celebrate Thanksgiving with as many family and friends as I can find.”
Another Facebook post said Smith’s constituents understand Centers for Disease Control and Prevention guidelines and “can make their own informed decisions and maintain their personal rights.”

Brown on Monday did not address Smith’s comment but said her household will keep its gathering small. “We want to make sure that we don’t accidentally kill someone,” Brown said.

CNN has been unable to reach Smith for comment.

The hospitalization record is shattered, again

The US has averaged 148,725 new Covid-19 cases per day over the past week, according to Johns Hopkins. That’s a 31% increase in new cases from the previous week.

But the number of new Covid-19 tests performed has increased only 10.42%, according to the Covid Tracking Project.

About 1,000 people on average are dying every day, Fauci said Monday at an American Medical Informatics Association virtual symposium.

“This is really an extraordinarily difficult situation,” he said, referring to the big surge of infections, “the likes of which we have not seen, including what was going on in the spring.”

“We are now, as we get deeper into the cooler weather of the fall and the upcoming winter weather that’s cold, people are going to be doing more things indoors rather than outdoors, which means we really need to double down on the fundamental things that we do to prevent infection,” he said.

A growing number of Republican and Democratic governors and city leaders have issued new mandates to try to stop the crisis from getting worse.

“Despite the health order that limited mass gatherings to 10 people that was signed in April remaining in effect, we have seen rampant spread of the virus as a result of banquets, wedding receptions, and social gatherings following funerals,” the governor said.

“We have seen great tragedy associated with such events. It’s not the ceremonies causing the problem. It’s the party afterward.”

The revised order prohibits dancing or socializing in open, congregate areas. Guests must be seated, and food should be served to them at their seats. No more than 10 people can sit at a table, and those people must be from the same household.

Philadelphia announced new outdoor restrictions. As a result, the Eagles will not be able to host fans at Lincoln Financial Field, the NFL team said in a tweet.

“We need to slow the spread of this virus,” said Republican Gov. Kevin Stitt. “Data shows that social distancing is harder to maintain as it gets later at night, especially in bars.”

Beginning Tuesday, state employees must wear masks in common areas or when they are close to other workers, Stitt said.

In Michigan, high schools and colleges will shift to remote learning for three weeks. Indoor restaurant dining has been suspended.

And Republican Govs. Doug Burgum of North Dakota and Gary Herbert of Utah are among the latest to mandate face masks across their states.

“Right now, the data demands a higher level of mitigation efforts to reverse this dangerous trends, to slow the spread of the virus, and to avoid the need for any economic shutdowns,” Burgum said.

Health experts have lamented the lack of a strong, coordinated federal response to this pandemic. So it’s “now up to governors” to enact tough restrictions to get Covid-19 outbreaks under control, two former commissioners of the Food and Drug Administration wrote.

“At least while infections are widespread and surging, governors and local leaders should mandate the use of masks and impose clear and consistent plans to restrict gatherings,” Dr. Scott Gottlieb and Dr. Mark McClellan wrote in a Wall Street Journal op-ed.

Many governors have taken aggressive steps to slow the spread,” they wrote, “but states that don’t act quickly put the entire nation at risk.”

‘This winter will be hard’

Yes, there’s great news with two vaccine trials — one from Moderna, and one from Pfizer/BioNTech.

But let’s be clear: There will be no return to normal this year, BioNTech CEO Ugur Sahin said.

“This winter will be hard. We will not have a big impact on the infection numbers with our vaccine this winter,” Sahin told the BBC.

But just like the Moderna vaccine, the Pfizer/BioNTech vaccine requires two doses for each person.

So if 50 million doses are available worldwide by the end of this year, that would mean 25 million people could get vaccinated.

Moderna, Pfizer and other companies making vaccines must first ask for and then receive emergency use authorization from the US Food and Drug Administration before they can start distributing their vaccines.

Fauci said the efficacy of the Moderna vaccine is more than he would have predicted.

“For me, that was aspirational to get to that level. I would have been comfortable with a 70 to 75% effective vaccine,” he said.