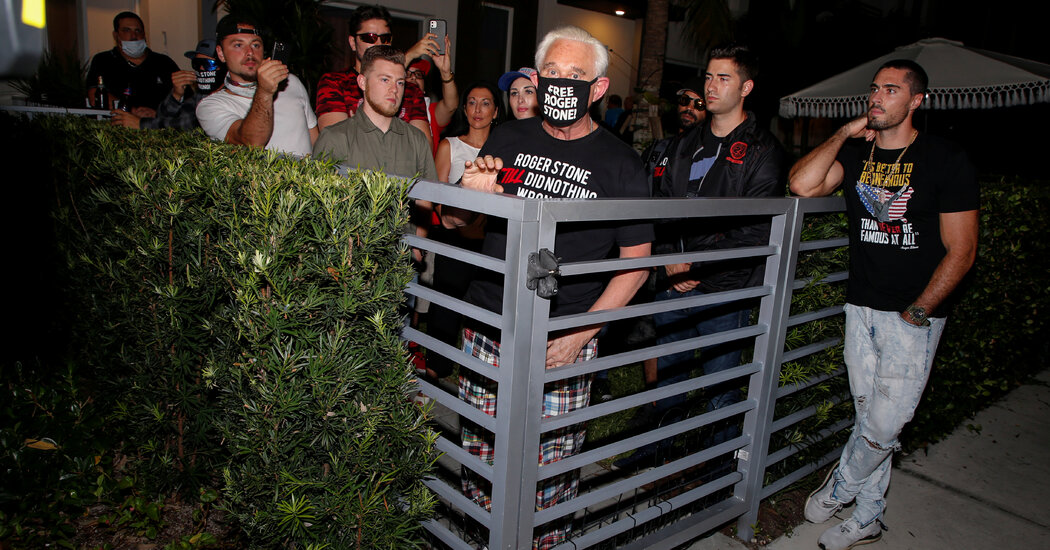 Outraged by President Trump’s commutation of the sentence of Roger J. Stone Jr., House Democrats pushed forward legislation on Thursday that would give lawmakers new authority to scrutinize uses of executive clemency involving presidential family members or crimes against Congress and explicitly outlaw presidents from pardoning themselves.

The measure approved by the House Judiciary Committee amounts both to the most substantial attempt by Congress in recent history to put guardrails around one of the most powerful authorities granted to a president by the Constitution and to a symbolic rebuke of Mr. Trump. Given the scope of that power, it would almost certainly be challenged in court if it ever becomes law, which itself remains a long shot unless Democrats recapture full control of the government this fall.

Democrats on the Judiciary Committee said Thursday that Mr. Trump’s general willingness to test the limits of his powers and his particular commutation of Mr. Stone, a longtime friend who was found guilty of lying to and obstructing a congressional investigation into the president’s 2016 campaign and its ties to Russia, made it necessary to act.

At the same time, Democrats advanced legislation that would pause the statute of limitations on any federal offense committed by presidents or vice presidents during their time in office so they cannot escape charges that might be brought if they were not in the White House.

“We do live in days when long-settled norms are being destroyed with alarming frequency,” said Representative Jamie Raskin, Democrat of Maryland and the author of the provision outlawing self-pardons. “Now is the time to make clear what has always been the very basis of our rule of law: No person is above the law and no president of the United States of any political party can insulate himself from the consequences of his past or future crimes by pardoning himself.”

Democratic leaders are considering including both bills in a larger package of good-governance measures clamping down on actual or potential abuses of power they believe Mr. Trump’s presidency has exposed. The full House could vote in the coming weeks, potentially delivering a broad reproach to Mr. Trump’s administration as he prepares to face voters.

The measures would be almost certain to run aground in the Republican-controlled Senate this term, but Democratic leaders think they could become law if their party wins the White House and control of the Senate in November.

When The New York Times surveyed presidential candidates about executive power issues last year, former Vice President Joseph R. Biden Jr., now the presumptive Democratic nominee, indicated he would support a proposal similar to the one requiring that records related to certain acts of clemency be shared with Congress.

Still, any attempt by Congress to enact statutes limiting pardon powers raises tricky separation-of-powers questions that would most likely be litigated in the courts. With virtually no precedent, the outcome of such challenges is hard to predict.

One Republican, Representative Ken Buck of Colorado, joined Democrats in voting for the statute-of-limitations bill, but the president’s party unanimously opposed placing limitations on his pardon power. Republicans said both bills were constitutionally dubious and aimed at harassing Mr. Trump, rather than promoting good behavior by all presidents, as Democrats claimed.

“Just admit it,” said Representative Doug Collins, Republican of Georgia. “You’ll feel so much better in the morning to say this is about Donald Trump. We want to make sure that we can get him. We failed in impeachment. We failed in the Mueller. We failed in life and we’re going to fail in November, but we’ll try to get him then.”

The debate played out roughly two weeks after Mr. Trump commuted Mr. Stone’s 40-month sentence, outraging Democrats who have watched in horror for years as Mr. Trump has shattered presidential norms. Mr. Stone, the president’s former political adviser, was found guilty of seven felony crimes and had openly bragged about protecting the president from investigators. The White House argued that Mr. Stone had “already suffered greatly” at the hands of “overzealous prosecutors” and did not deserve jail time.

The Constitution affords the president broad clemency powers “to grant reprieves and pardons for offenses against the United States, except in cases of impeachment,” allowing a president to nullify a federal crime or a sentence associated with it.

One of the bills approved by the Judiciary Committee on Thursday would require giving Congress information gathered by the Justice Department and the White House about a clemency recipient if the pardon or commutation related to certain offenses, including those, like Mr. Stone’s, that arise “from an investigation in which the president, or a relative of the president, is a target, subject or witness.”

Democrats believe that level of transparency would discourage presidents from abusing their power and allow them to investigate, potentially using the information to contemplate impeachment.

The bill also seeks to clarify existing law by saying that promising or granting a pardon in exchange for something of value is criminal bribery.

The provision outlawing presidents from pardoning themselves was adopted as an amendment offered by Mr. Raskin by a vote of 19 to 13. Mr. Trump has insisted he has the “absolute right” to pardon himself for crimes he has already committed or any he could commit in the future, though he maintains he has done nothing illegal.

The Constitution contains no explicit limit on a self-pardon by presidents. But some legal scholars have argued that it makes an implicit exception barring that kind of exercise of clemency powers because it would be a conflict of interest, and the Justice Department took that view in 1974.

There is no precedent for a president purporting to pardon himself, let alone then facing criminal charges anyway, so there are no Supreme Court guideposts for the question.

It would address an objection some legal scholars have raised to the Justice Department’s view that it would be unconstitutional to indict a president while in office: The ticking clock to bring charges could put presidents essentially above the law.

“If public service is a public trust, then serving as president shouldn’t close the door on accountability,” said Representative Ted Deutch, Democrat of Florida. “That is what the current system sets up.”

The committee adopted an amendment put forward by Republicans to also suspend the statute of limitations on any crimes committed by a vice president. Representative Greg Steube, Republican of Florida, said the amendment was necessary to “hold Joe Biden and the Democrats to the same standard as President Trump.”

Because the statute of limitations was created by Congress, it is within lawmakers’ power to modify it and therefore less likely to face legal challenge. Still, Republicans said they could not support a bill unless it did not take effect until after the next Inauguration Day.