How a brand of chalk achieved cult status among mathematicians 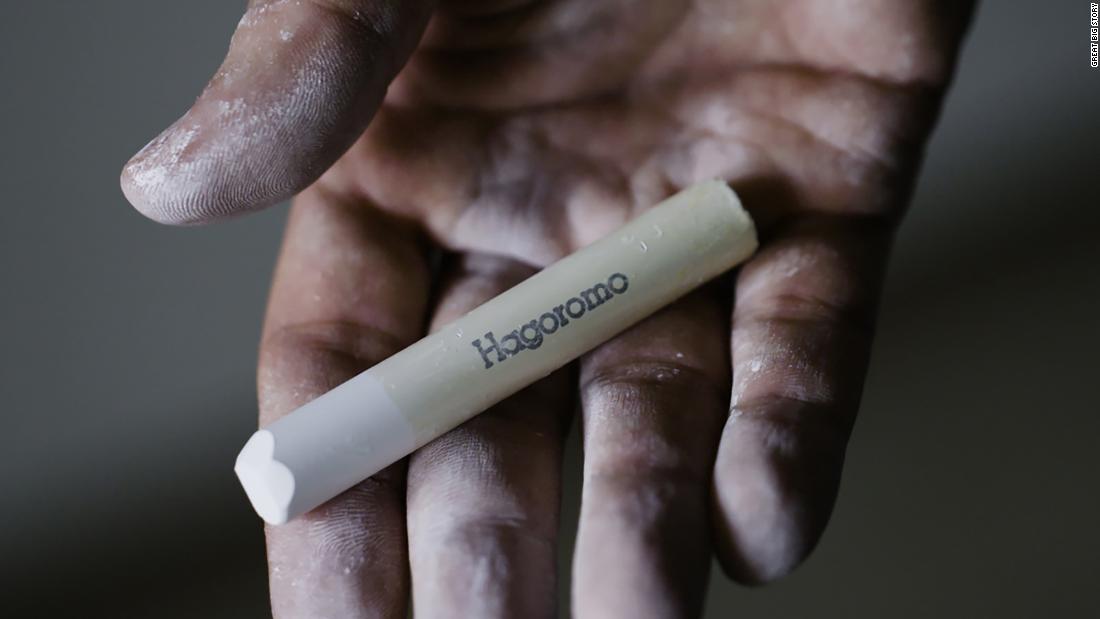 And it turned the world’s brightest minds into hoarders, going to great lengths just for a few sticks of the stuff.

“I would reach into my cupboard in my office and pull out another box and we’d do the deal in my office,” says math professor (and chalk dealer) Brian Conrad of Stanford University.

“I didn’t want to become a chalk dealer, but I did like the idea that I could be, ‘The first stick is free,’ chalk dealer on the block in my department,” says Max Lieblich, a mathematics professor at the University of Washington.

For many mathematicians, the act of writing on a blackboard is a type of artistry, one that requires the proper tools.

“It’d be like Picasso using Sharpies on a piece of waxed paper instead of using an actual canvas and oil paints,” says Dave Bayer, a mathematics professor at Barnard College in New York City.

And among the academic crowd, Hagoromo Fulltouch Chalk is the math world’s best kept secret.

“It doesn’t break as easily, and the way it writes just feels right,” says Lieblich.

“The legend around this chalk is that it’s impossible to write a false theorem using the chalk, but I think I’ve disproved that many times,” says David Eisenbud, a mathematics professor at the University of California at Berkeley.

Hagoromo Stationery first began manufacturing chalk in Japan back in 1932, but it wasn’t until the last few decades that American mathematicians fell in love with it.

“I discovered it when I went to visit the University of Tokyo years ago and one of the professors there … said to me, ‘You know, we actually have better chalk than you do in the States,'” Eisenbud said. “I said, ‘Oh, go on, chalk is chalk … I was surprised to find that he was right.'”

Since the brand did not import into the United States, mathematicians took to ordering boxes online, or through designated “chalk dealers” who began to make a business by supplying the chalk to professors.

“Hagoromo definitely has a cult following, but that cult might be nearly all mathematicians at this point. So it’s a pretty big cult,” says Wei Ho, a mathematics professor at the University of Michigan.

The secret formula remains a mystery

So, what’s the secret sauce? Well, the formula is still a mystery, but everyone has their own hypotheses.

“I assume the special ingredient in Hagoromo is angel tears,” says Lieblich.

“Someone told me that it had clam shells in its compositions … I don’t know if that’s true,” says Eisenbud.

Whatever it is, it was enough to create a deep devotion among its users. The relationship between a mathematician and a blackboard is longstanding.

The blackboard tradition seems to be beloved among math professors. Bayer describes it, as a “tactile … romantic connection,” one that harkens back to generations of mathematicians that came before them.

“You know, one reads about Archimedes drawing in the sand … but I wouldn’t be surprised if there was something like chalk and a blackboard back then, too,” Eisenbud said.

When the company went out of business, chalk chaos ensued

But blackboards are at risk of dying out due to college administrators who prefer whiteboards or newer technology, like interactive whiteboards, also known as Smart Boards.

“The thought of giving up blackboards makes me feel very sad inside, I’m not going to lie,” says Lieblich. “It’s not like losing a limb, but it would make the texture of life very different.”

“It’s pretty much 6-year-old children and mathematicians,” says Conrad. “And that’s it, so we’re the last ones left.”

So, when Hagoromo announced that it was going out of business in 2014, it caused a rupture in the math community.

“I referred to it as a chalk apocalypse,” Conrad said. In a panic, mathematicians across America began stockpiling resources in preparation.

“I calculated how many boxes I would need to last 10 to 15 years and I bought that many boxes,” says Lieblich.

Dave Bayer took things even further. “I single-handedly bought the rest of the Amazon supply in the middle of the night,” he said.

“I have a closet full of it at home,” says Eisenbud. “It’s hard to say how long it would last me, but I think at least 10 years at my current rate of use.”

And how expensive exactly is Hagoromo? Depends on your idea of “expensive.”

“Compared to caviar, it is cheap,” says Lieblich. “And it is much more enjoyable for me, personally, than caviar.”

At market price, a box of 72 sticks of Hagoromo went for $17, but during the rush, there were reports of some dealers raising the prices to nearly $25 a box. Production ended on March 31, 2015.

A Korean teacher saved Hagoromo’s legacy from being erased

But while American mathematicians took to hoarding Hagoromo, on the other side of the world, a teacher in Korea took another approach. Shin Hyeong-seok first came across Hagoromo during a research trip to Japan, and his world was forever rocked.

“It was amazing,” remembers Shin. “It was so much softer than the ordinary chalk we were using in Korea.”

He brought a few boxes back to Korea and even tried to find his own way to manufacture the chalk, with no luck. So, he resorted to importing the chalk from Japan himself.

That proved to be challenging in its own ways. Hagoromo was a third-generation family business. To develop an import relationship with the company, Shin first had to win the affections of Hagoromo’s president, Takayasu Watanabe.

“His second daughter had come to Korea as an exchange student and was very fond of Korea,” says Shin of Watanabe’s daughter. “Mr. Watanabe and his wife would visit Korea several times a year to eat Korean food and go sightseeing … So, when I approached him saying I wanted to import the chalk from Japan, he welcomed the idea.”

But Hagoromo’s president was skeptical of Shin’s proposal

They formed a business relationship that spanned over a decade. Then, in 2014, Watanabe was diagnosed with cancer. As all his own children had careers of their own, Watanabe was afraid he would have to shut down the company. So Shin put forth his own proposal: What if he brought the technology to Korea and just kept making Hagoromo chalk himself? Watanabe was skeptical.

“He really tried to stop me,” says Shin of Watanabe. “He said, ‘You’re a teacher with no experience in manufacturing … you should not make this decision lightly.'”

Eventually, Shin won him over.

“I told him that I believe Hagoromo is the best chalk in the world,” Shin said. “There are products that are bound to disappear as times change, but the best quality product should be the last to disappear.”

With that, Shin set out to transfer 16 shipping containers worth of machinery from Japan to Korea. He invested his savings into learning, replicating and perfecting the Hagoromo processes — all in the name of chalk. Watanabe even visited the factory in Korea, in his wheelchair, to inspect the quality of the new batches of chalk. The time and investment all paid off.

Thanks to Shin, Hagoromo continues to be produced today

“A student of mine from South Korea made a trip back home and came back with a box … it was indistinguishable,” Conrad said. “And a Japanese colleague of mine who’s a big fan of the stuff, I gave him a piece of each type, the old type and the new type, and he couldn’t tell the difference. Indistinguishable, just as good as always.”

So, how about the mathematicians and their stockpiles?

“It was mixed emotions,” says Lieblich. “I was happy to know that it would still be made. I was a little disappointed that I was less clever than I thought I was.”

“There’s incredible value to this, but the value is in using it up, not hoarding it,” says Bayer.

Earlier this year, on July 31, Takayasu Watanabe passed away in Japan. Thanks to Shin, his chalk legacy will live on.

And the mathematicians who love the chalk continue their love affair.

“I do feel like I am being a craftsman when I use the chalk,” says Bayer. “But it’s nothing compared to my admiration for the craftsmanship that went into making the chalk.”