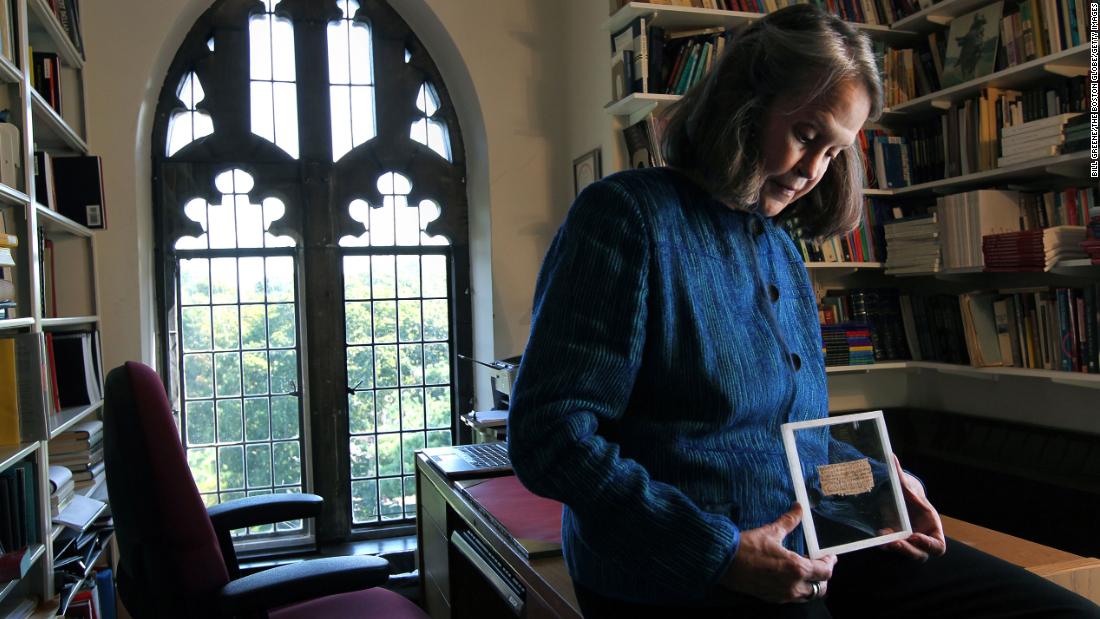 It seemed, at first, like a blockbuster finding for feminist scholars and an existential threat to the Catholic Church’s all-male priesthood.

King, who unveiled her find just steps from the Vatican, thought the fragment could validate her life’s work: claiming a place for women in the early days of Christianity.

But instead of overturning years of religious scholarship, King’s “discovery” capsized her career.

The “Gospel of Jesus’ Wife,” as King called it, was exposed by scholars as fake, and the prestigious professor’s name has become a watchword for academics hoodwinked by con men.
In 2016, after journalist Ariel Sabar published an article in The Atlantic uncovering the ownership history of the “Jesus’ Wife” fragment, King herself publicly acknowledged the papyrus is likely a forgery.

Four years later Sabar is back with the fascinating full story in his new book, “Veritas: A Harvard Professor, a Con Man and the Gospel of Jesus’ Wife.”

Sabar painstakingly unspools the threads that lead to King’s demise, seeking to explain why she would stake her reputation on promises from a mysterious Florida man she’d never met.

You can see evidence of the fragment’s fakeness on Sabar’s website.

CNN recently spoke to Sabar about the Gospel of Jesus’ Wife, whether anyone still believes it’s real and what might have motivated the forger. This interview has been edited for brevity and clarity.

What’s the thinking now on the Gospel of Jesus’ Wife? Are we 95% sure it’s fake? Higher than that?

It’s safe to say that there is no scholar that I know of anywhere who is defending the Gospel of Jesus’ Wife as authentic, not even Karen King. She was the last holdout, and after my piece in The Atlantic about its provenance (history of ownership), King said it “tips the balance towards forgery.”

You did a lot of biographical research on King. What was her background in religion?

She grew up in a small town, Sheridan, Montana. She always felt like an outsider, as a star student in high school and as a person of faith. She had gone to a Methodist church with her family but decided it was not earnest or serious enough so she walked across the street to the Episcopal Church, where she was the only youth in the Bible study.

Later, she had an evangelical conversion at a summer camp, where she felt transported and empowered by Jesus. But when she came back to Sheridan, the Sunday school teacher belittled her for it, saying “that’s not really how we do Christianity.”

It was a really hard thing for her to hear, especially at that age, that she was “doing Christianity wrong.” And you can find that through line in her career. She shines a very bright light on the line between heresy and orthodoxy.

And King is a scholar of Mary Magdalene, right?

King is interested in recovering the original Mary Magdalene and making her stand for early Christian women. One of the ways she’s brought Mary Magdalene to greater prominence is through the Gospel of Mary, the only Christian scripture written in the name of a woman.

(Editor’s note: The text, discovered in 1896, is considered outside the Christian canon. It’s unclear if the gospel is actually about Magdalene.)

But even where Jesus comes to the defense of these early female figures in the Gnostic gospels, it’s at the expense of their sexuality, and King lamented this. She wanted to know: Why wasn’t it OK for early Christian women to be apostles and retain their capacity to be a woman?

The Gospel of Jesus’ Wife squared that circle for King. In its central lines, “Jesus said to them my wife … she is able to be my disciple.”

That provides, in two fragmentary lines of Coptic, an answer to a question Karen King had been asking her whole career.

Did the forger know that about King? Do you think the fake Gospel was targeted specifically at her?

The owner of the Gospel of Jesus’ Wife is Walter Fritz, who most scholars regard as the forger. Fritz denies that, but there is strong circumstantial evidence that he did.

(When contacted by CNN, Fritz acknowledged owning the fragment and giving it to King. He also said: “Mr. Sabar has been working on this book for six years. He’s a hired hand for somebody to discredit the piece that I own. It is not a forgery.”)

I asked him if he approached anyone besides King about the fragment. He said no. He had seen her on TV and heard a lot about her work.

It was not hard to find out what King would find compelling. You can find DVDs in which she talks about this very idea: Women could be disciples only if they gave up the part of themselves that made them women. It wouldn’t have been hard for someone to discover her as the ideal mark.

Who is Walter Fritz and why would he go through all of this trouble? It’s not like forging ancient papyrus is a lucrative career, right?

One thing I hope readers realize is that motivations are complex. There’s no one single answer to that question. There’s always four or five.

With Walter Fritz, we do know that he was unemployed and financially struggling. He was raised in southern Germany and studied Egyptology for a time in Berlin. He wrote a paper that he hoped would blow away the chairman of his department. Instead, he was accused of plagiarism and quickly left.

This same Walter Fritz later turns up in Florida as an auto parts dealer, an art dealer, and finally an internet pornographer.

Initially Karen King brushed off the mysterious man with the supposedly ancient papyrus fragment. Why did she change her mind?

That is the big question. She went from telling Fritz she didn’t believe it was authentic and declining to help him, and then, out of the blue, without consulting any scholar that I could find, she does this 180 and says she would like to publish the fragment and make Harvard its home.

It’s a really enigmatic pivot that Dr. King makes right around the time Harvard’s president questions whether the Divinity School is pulling its weight at the university. Ultimately, the president changed her mind … and she announced the divinity school would be spared on the very same day Dr. King landed on the front page of The New York Times by unveiling the Gospel of Jesus’ Wife in Rome.

(CNN reached out to King directly for comment for this story but our emails were not returned.)

What did the Harvard president, Drew Faust, say about the timing of her announcement?

I asked her a couple of times about the overlaps in time and the response I got from her office was “Dr. Faust believes that others are in a better position to explain that to you.”

So she certainly doesn’t dispute it. It’s still something of a mystery.

(When asked for comment, Harvard referred CNN to a 2016 statement from David N. Hempton, dean of its Divinity School. It references Sabar’s 2016 article in The Atlantic and says, in part: “Reached for comment by The Boston Globe after publication of the Atlantic article, Professor King was quoted as stating that ‘It appears now that all the material [owner Walter] Fritz gave to me concerning the provenance of the papyrus … were fabrications.’ The statement added, “The mission of Harvard Divinity School, its faculty, and higher education more generally is to pursue truth through scholarship, investigation, and vigorous debate. HDS is therefore grateful to the many scholars, scientists, technicians, and journalists who have devoted their expertise to understanding the background and meaning of the papyrus fragment.”)

One thing I kept wondering is, why would King do this? She was at the top of her field and knew the “Jesus’ Wife” controversy could be a career-breaker.

That’s right. She foresaw this before she went public. Which raises questions: Why didn’t she consult more expert scientists? Why not go to an expert in Coptic papyrus?

Instead she pushes it out into the world even though, on some gut level, she knows the fragment is fake.

You think King knew it was fake from the start?

The readers will have to consider the evidence.

She declined to present photographs when she first announced the papyrus to her colleagues. That would have immediately raised alarms, that she didn’t give her own colleagues the evidence needed to evaluate the papyrus. And she didn’t even mention the other piece in the collection, a fragment supposedly from the Gospel of John, which top scholars of Coptic had marked as a forgery within hours of seeing it.

Why withhold evidence from colleagues if you believe it’s authentic? Did she know it was fake and thought the ends justify the means? Was she willing to use a fake sensation to whet the public’s appetite for this other interesting object (the Gnostic gospels)? To use a forgery to point to the truth?