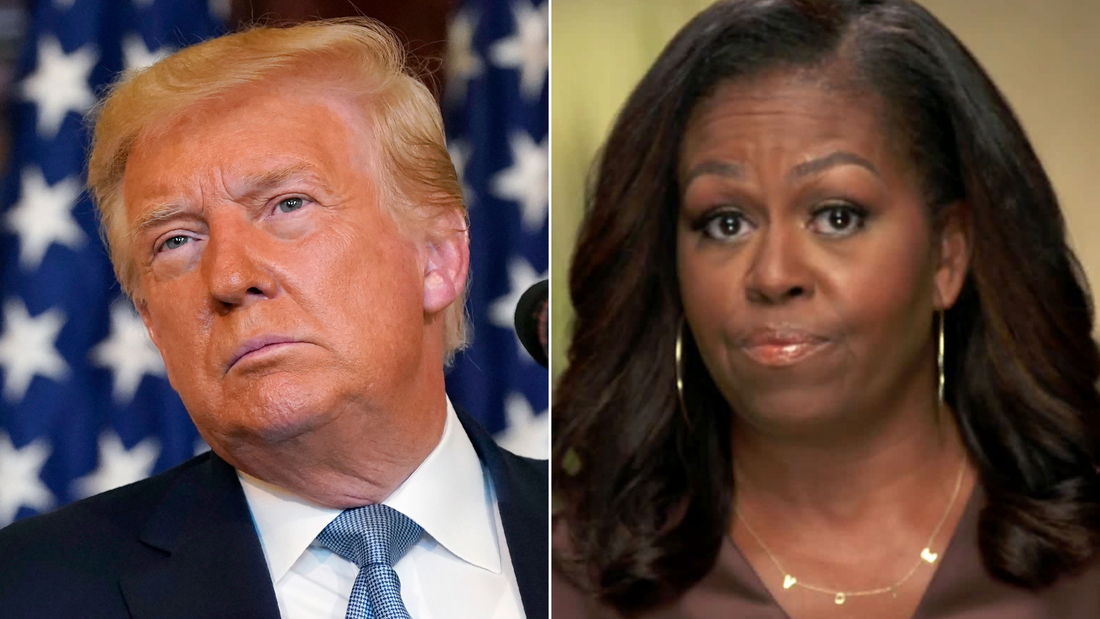 “Well she’s in over her head, and frankly, she should’ve made the speech live, which she didn’t do,” said Trump Tuesday morning. “She taped it. And it was not only taped, it was taped a long time ago, because she had the wrong deaths. She didn’t even mention the vice presidential candidate.”

On its face, there’s no big surprise there. This is a President who hits back when attacked. Always. Like, every single time.

But if you read Trump’s attempt to denigrate Obama closely, you see that in trying to diss the former first lady, he dissed himself (bolding is mine):

“She taped it. And it was not only taped, it was taped a long time ago, because she had the wrong deaths.”

Think of what Trump is saying here: Michelle Obama really screwed up her speech because she said 150,000 Americans had died from coronavirus when, in fact, that number is now well over 170,000.

Er, I don’t think that makes the point that Trump wants to make.

What’s worse, Michelle Obama pre-taping her speech and citing the coronavirus numbers that were accurate at the time, or the fact that 20,000 more Americans have since died from Covid-19 under Trump’s watch?

“I can confirm @BarackObama will have the most up-to-date figures for his turn tomorrow night,” noted Cody Keenan, the 43rd president’s chief speechwriter, on Twitter in response to Trump’s attempted hit on Michelle Obama.

What Trump’s comment reinforces is his belief that he bears no responsibility — and is not blamed by the public — for the country’s ongoing struggle to contain the coronavirus pandemic.

Remember that way back in March, when asked whether he felt he deserved some blame for the struggles to make testing kits widely available, Trump responded: “No. I don’t take responsibility at all.” Trump also insisted that he bears no blame for the rapid reopening of states like Georgia and Florida — helmed by Trump acolytes — this spring that led to both states experienced a major resurgence in the virus. And zero blame for the politicization of mask-wearing.
In fact, Trump has taken to insisting that he deserves credit for keeping the mortality numbers down. “I think it’s been amazing what we’ve been able to do,” he said earlier this month. “If we didn’t close up our country, we would have had 1.5 or 2 million people already dead.” (That claim is very shaky.)
Asked Monday by CNN’s Wolf Blitzer about whether 1,000 Americans still dying every day from coronavirus could possibly be considered a success, White House adviser (and Trump son-in law) Jared Kushner said this:

“Well, look, you want to keep that number to be as low as possible. One American dying every day is too much. But if you look at where we were back in April, we had 2,500 Americans dying a day. And again, it was because the virus was spreading out of control.”

Unfortunately for Trump and Kushner, the American public disagrees with their view of how this administration has handled the pandemic. A flurry of recent national polls show somewhere between 38% and 44% of voters approve of how Trump is dealing with Covid-19. And in a CNN poll released on Monday, 52% said they trust Joe Biden more to handle the coronavirus crisis, while 43% chose Trump.
Trump’s eroding numbers on coronavirus have corresponded with a decline in his numbers in head to head match-ups with Biden. According to CNN’s poll of polls, Biden holds a 51% to 42% edge over Trump.

Reminding people that in the relatively short period of time between when Michelle Obama taped her convention speech and when it ran on Monday night, an additional 20,000 Americans have died from Covid-19 is a disastrous self-own by Trump. And what’s worse is, he probably doesn’t even get that.