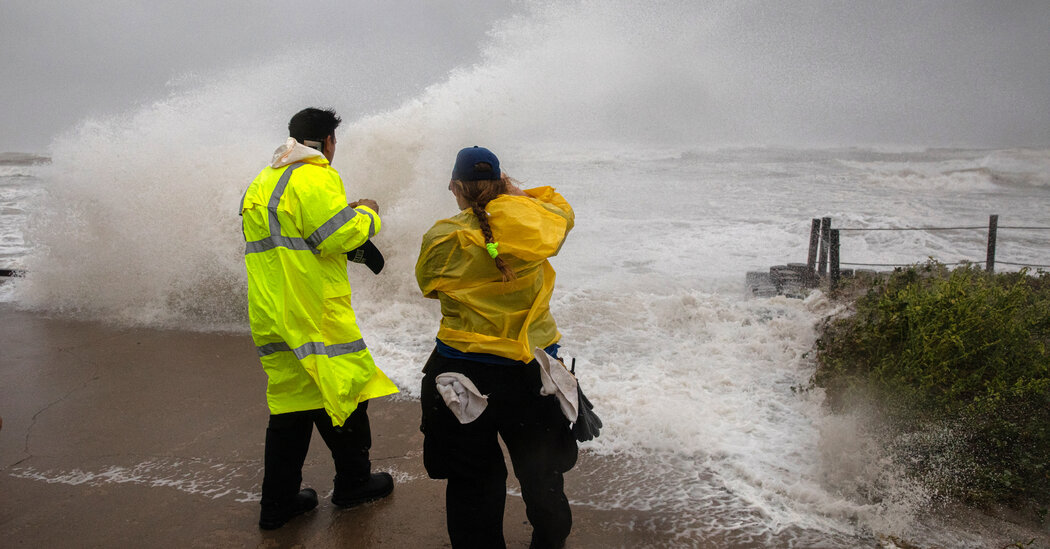 CORPUS CHRISTI, Texas — Already battered by the coronavirus pandemic, southeast Texas faced a new but no less frightening foe on Saturday, as Hurricane Hanna slammed the coast with heavy rains and winds predicted to reach 110 miles per hour.

Hanna strengthened from a tropical storm to a Category 1 hurricane on Saturday morning, and forecasters issued the first hurricane warning for the southern coastal region since Hurricane Harvey struck the area in August 2017 and caused the worst rainstorm in United States history.

The National Weather Service warned that the strong winds could peel roofs from homes, mangle trees and cause power outages, as mayors and local officials turned from one crisis mode to another.

The hurricane, the first of the Atlantic season, was churning about 20 miles off the coast as of 3 p.m. on Saturday, and the center of the storm was moving toward the shore at about eight miles per hour. The hurricane’s winds were recorded at 85 m.p.h., and the center of the storm was expected to make landfall on Saturday afternoon or evening in Kenedy County, which is roughly 70 miles north of the U.S.-Mexico border.

The cities and counties in the path of Hanna are some of the same communities that have seen a sudden spike in Covid-19 cases and hospitalizations as Texas has become one of the largest hot spots in the country. In a state that is no stranger to bad weather, the typical hurricane-prep ritual was altered by social distancing and face coverings, with fever checks required to enter officials’ news briefings and sandbag distribution provided by workers who covered their faces in masks and bandannas.

When natural disasters strike, swift and effective disaster response by local, state and federal officials has always been difficult. The pandemic has made it even harder.

Social distancing is changing where, when and how emergency shelters operate. Officials in California announced recently that the coronavirus was affecting their wildfire preparations, including by having fewer inmates available to assist because of infections and quarantines. But there have been unexpected benefits, too. In late March, a destructive tornado tore through Jonesboro, Ark., and the heart of its commercial district, but not a single person died, in part because businesses were closed and residents were already sheltered at home from the virus.

As Hanna churned toward Nueces County, which includes Corpus Christi and has had nearly 2,000 new virus cases and 47 deaths in the past seven days alone, officials publicly reminded residents fleeing low-lying areas to bring their face masks with them.

“We’re riding two horses right now, so be sure to take care of what keeps you safe through the Covid experience,” Mayor Joe McComb of Corpus Christi said at a news conference on Friday. Moments later, a woman in a mask and gloves carefully wiped down the podium to sanitize it before the city manager stepped forward.

On Saturday, the mayor told reporters that people who had welcomed friends or relatives into their homes to ride out the hurricane should wear masks while indoors. “Wear the mask in the house,” Mr. McComb said. “I know that probably sounds kind of crazy, but keeping safe sounds pretty good.”

The mayor’s message to the public on Saturday was simple: Keep doing what you have been doing during the pandemic — stay at home.

“I know we’ve been staying at home for five months because of the corona,” Mr. McComb said, adding, “And so staying home doesn’t sound real popular, but right now this is a real important matter.”

The rise in cases in Nueces County was fueled, in part, by visitors from Houston and elsewhere who flocked to its beaches when it had a low case count. More than 10,000 people in Nueces County have been infected with the virus. At least 129 people have died, and 430 people were being treated in hospitals on Friday, the highest total since the pandemic began.

The storm arrived in Corpus Christi on Saturday morning with light rain and strengthening wind that rattled windows and threatened to uproot swaying palm trees.

With the beaches ordered closed to pedestrians and vehicles, the usual summertime bustle of weekenders was gone, even though the city was expected to avoid a direct hit by the hurricane. By Saturday afternoon, a gust of 104 m.p.h. was recorded on the coast south of Corpus Christi, and the city’s airport canceled most of the scheduled flights by Saturday afternoon.

Webb County, which includes the border city of Laredo and is about 150 miles inland from Corpus Christi, has traditionally provided shelter to people fleeing the Texas coast, as it did for hundreds of people during the devastation that Harvey wrought along the coastline in 2017.

On Saturday, officials were grappling with how to handle a potential influx of evacuees without worsening the spread of the coronavirus, which has surged there in recent weeks. More than a quarter of Webb County’s nearly 5,000 cases have come in just the past week, during which 38 people died from the virus.

Tano E. Tijerina, the county executive, said that if evacuees came to the area, officials would take their temperatures, provide them with protective gear and try to separate people with virus symptoms from those who appeared healthy.

“We’re going to do whatever we can to help anyone, that’s with Covid or without Covid,” Mr. Tijerina said. “We’re taking a risk, but we’re being neighborly and we’re never going to turn people away.”

He said that schools, community centers and even the county fairgrounds could serve as shelters if necessary. He said the daily coronavirus reports were increasingly dire, with four or five people dying each day.

“We’re going to get through it — it’s just a matter of how,” Mr. Tijerina said of the dual threat of the virus and the hurricane.

Hanna, in some ways, provided echoes of its destructive predecessor, Hurricane Harvey.

Hanna was set to strike to the south of Corpus Christi; Harvey hit to the northeast, near the bay town of Rockport. Hanna was expected to make landfall on Saturday, exactly one month before the third anniversary of Harvey, which first hit Rockport on Aug. 25, 2017.

Harvey was one of the worst disasters in American history, causing $125 billion in damage in Texas with winds at 130 miles per hour and record-breaking flooding. More than 100 people died directly and indirectly from Harvey, officials said. More than a quarter of a million homes were damaged and another nearly 16,000 were destroyed.

Hanna was not expected to be nearly as devastating, but the unease grew as the hurricane gathered strength on Saturday.

Corpus Christi residents who live on the coastline of scenic Whitecap Beach kept a watchful eye on the swelling sea waters threatening their condominiums. On Saturday afternoon, a woman on the beach fought the full force of the wind to take a photograph of the rising tide, but quickly turned around when the water rose to her waist. Other residents nervously watched from a boardwalk, and waited.

“These are pretty impressive, aggressive waves,” said Zack Smith, 36, as he tried to stand still. “Once they start reaching my feet, then I’ll leave. I don’t want to get hit by one of those and get washed out.”

The National Hurricane Center issued a hurricane warning for a swath of Texas coast that spanned more than 100 miles, from Port Mansfield to Mesquite Bay. A storm surge warning reached even farther north, to about 75 miles south of Houston.

In addition to the wind, forecasters with the hurricane center said the storm would bring up to a foot of rain over the weekend, with some isolated areas getting up to 18 inches. The sudden downpour could lead to “life-threatening flash flooding,” they said. Tornadoes could also pose a threat on Saturday and overnight into Sunday over parts of the coast.

“There could be damage to buildings and structures, especially if there are any tornadoes,” said Brian Field, a forecaster at the National Weather Service office in Corpus Christi.

Hanna is the eighth named storm of the Atlantic hurricane season, which runs from June 1 to Nov. 30. In the Pacific Ocean, a Category 3 hurricane continued to churn toward Hawaii, although forecasters said that hurricane, named Douglas, was likely to weaken significantly as it got closer to the islands.