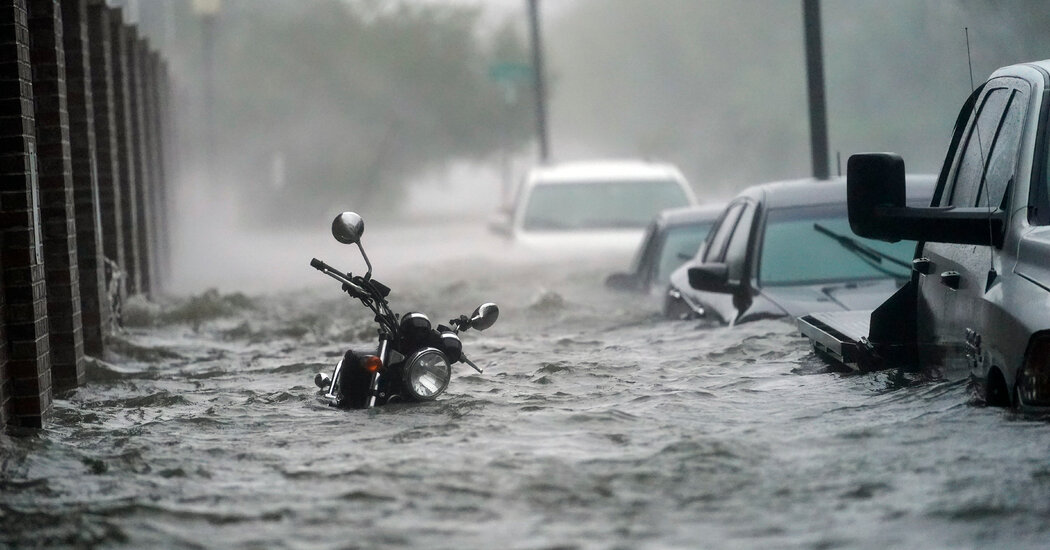 Floodwaters rushed through parts of Alabama and Florida on Wednesday morning, turning roads to rivers and submerging cars up to their bumpers as Hurricane Sally made landfall over Gulf Shores, Ala., and began moving slowly to the northeast, dumping rain along its path.

The surging water measured about five and a half feet high in Pensacola, Fla., which has already seen more than two feet of rainfall. Meteorologists said that up to 35 inches of rain could fall in coastal communities.

Sally weakened from a Category 2 hurricane to a Category 1 after making landfall at around 5 a.m. Central Time, but its deluge was not forecast to let up any time soon. Parking lots looked like ponds and hurricane-force winds continued to pound the Alabama coast and the Florida Panhandle.

The languid pace and lurching path of Sally, which was moving northeast at just 5 miles per hour along the Alabama-Florida border as of 10 a.m. Central Time, led officials to warn residents to hunker down for a sustained period of damage and rainfall.

Roughly 150,000 people in Alabama and 200,000 in Florida lost power overnight. With water and downed trees making roads impassible, and with the hurricane’s sustained winds still at 80 m.p.h., residents were told it could be hours before emergency services were dispatched in force.

As the sun began to peek through the clouds, videos from residents and local media outlets showed images of homes that had been ripped apart by the howling winds, boats torn from their moorings and power lines downed in many towns and cities. In Foley, Ala., just north of the hurricane’s landfall, images showed a destroyed mobile home and a door that appeared to have been yanked by wind from a house.

The extent of the damage was not immediately clear, but videos from Pensacola Beach, Fla., showed storm surge pushing seawater into residential streets and parks. According to the National Weather Service, a casino barge near Coden, Ala., broke loose because of strong winds and storm surge and slammed into a dock.

In recent days, the storm’s projected point of landfall has veered by nearly 200 miles. It had once been expected to rake over the remote, low-lying areas of southeastern Louisiana and possibly reach beyond the New Orleans metropolitan area. Instead, it was the more populated areas around Mobile, Ala., and Pensacola that appeared to bear the brunt of the storm.

John De Block, a meteorologist with the National Weather Service in Birmingham, Ala., said the storm was drifting “at the speed of a child in a candy shop,” as if it were meandering through the aisles and waffling over its choices.

Officials urged people to take advantage of the storm’s sluggish pace and get out of harm’s way. Those who stayed behind were warned that the waters could climb high.

“I’ve seen streets and neighborhoods quickly fill up with five, six, seven and even more depth of water in a short period of time,” Sam Cochran, the Mobile County sheriff, said during a briefing on Tuesday.

For those who stay behind, he added, it might be “a couple of days or longer before we can get you out.”

As raging wildfires burn vast swaths of the West Coast, and as the molasses-slow Hurricane Sally pounds the Gulf Coast, scientists say we are witnessing, again, the role of climate change in exacerbating natural disasters.

True to predictions by government scientists in May, this hurricane season has been among the most active on record, with 20 named storms so far. With the National Hurricane Center rapidly running out of letters of the alphabet for subsequent storms, ones after that will be based on the Greek alphabet in the likely event there are two more.

Scientists know that climate change has made hurricanes wetter, because as the atmosphere warms it can hold more moisture. But there is evidence that it can make them slow down, too, enabling the storms to pelt land with heavy rains and winds for longer.

Studies by Michael E. Mann, a climate scientist at Penn State, and others suggest that increased Arctic warmth reduces the temperature differential between that region and the tropics. This leads to a slowing of the jet stream, which affects other circulation patterns in the tropics but also in mid-latitude areas like North America.

“Our work indicates that climate change is favoring this phenomenon,” Dr. Mann wrote in an email message. “It likely plays a role in the decreased translation speed of landfalling hurricanes.”

Though conservative media and President Trump have disputed any suggestion that climate change is a factor in the West Coast wildfires, scientists have identified it as a primary cause. The results of climate change could cause millions to become displaced, reshaping America.

There is a profound respect for the power of the weather in the 318-year-old port city of Mobile, Ala., where hurricanes have consistently been a fact of life. The proof on Tuesday was in its near-empty downtown streets as night fell and the city waited for slow-moving Hurricane Sally to make its way ashore.

Bars and restaurants that featured signs prompted by the coronavirus pandemic (“No Handshaking,” one declared) were now sandbagged in anticipation of the new crisis coming up from the south. Violent winds animated the arms of old oak trees. Traffic lights on wires tossed and shook.

In Bienville Square, the 19th-century fountain honoring Dr. George Ketchum, who helped bring reliable drinking water to the city, burbled along with hardly anyone to see it.

Over the last day or so, some longtime Mobile residents said that Hurricane Sally, with its dangerous and stubborn procrastination, reminded them of Hurricane Danny in 1997, which also moved at a crawling pace while dumping rain for hours, setting off mudslides and catastrophic river flooding in South Alabama.

“The pleas that we’re making to you, the warnings that we’re giving you, they’re serious,” he said during a news conference on Tuesday. “They’re talking about unprecedented amounts of rainfall.”

Still recovering from Hurricane Laura and now bracing for Hurricane Sally, residents along the Gulf Coast and the Eastern Seaboard warily watched reports of other major storms developing in the Atlantic.

On Monday, before Tropical Depression Rene dissolved, there were five concurrent named storms in the Atlantic, which has not happened since 1971, according to the National Oceanic and Atmospheric Administration.

Hurricane Paulette packed winds of 100 miles per hour about 450 miles south of Newfoundland, Canada, and threatened to bring dangerous surf and rip current conditions to Bermuda, the Bahamas and parts of the Atlantic Coast.

Tropical Storm Teddy was gaining strength about 865 miles east of the Lesser Antilles and was projected to near “major hurricane strength” as it approaches Bermuda over the weekend.